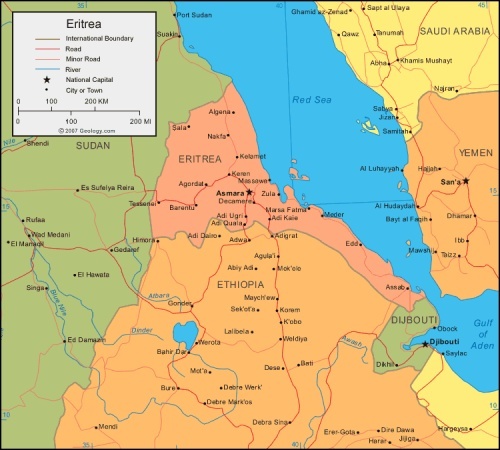 Or, another Diversion by Meles Zelawi? Regime After Ethiopian Regime troops launched assault upon Eritrea, the UNSG Ban Ki-moon issued a statement. The Eritrean Government has also been subject of UN Security Council sanctions for its purported “destabilizing actions” in the region. On the other hand, Ethiopia has been accused of serious violations on international humanitarian law against its own citizens particularly Ogaden, oppressed dissent, locked up international and domestic journalists and launched raids into neighboring Somalia as well. While the longstanding Regime of Menes Zelawi has secured tacit support from the West in its purported battle against “Islamic Radicals,” it has also courted Beijing. China funded construction of African Union HQ in Addis Ababa just completed end of last year. The UNSG also took note that Ethiopia’s Regime has refused to accept the border arbitration results of a “Boundary Commission” that was to have concluded all conflict between Ethiopia and Eritrea (and where Bosnia/Herzegovina troops have been stationed as peacekeepers). See our Previous Blog for Video Report –“Why Ogaden Isn’t in the News” - diplomaticallyincorrect.org/films/blog_post/why-ogaden-isnt-in-the-news-is-the-wool-being-pulled-over-our-eyes-by-susan-sacirbey/33764 Below is statement of the UN Secretary General issued through UN News Centre: “UNSG Ban Ki-moon has urged Ethiopia and Eritrea to avoid any action that could escalate tensions between the Horn of Africa neighbours, following Ethiopia’s attack yesterday on military bases in Eritrea. ‘The Secretary-General has urged both sides to exercise maximum restraint, Mr. Ban’s spokesperson, Martin Nesirky, told reporters in New York. ‘He calls on Ethiopia and Eritrea to resolve their differences through peaceful means and to avoid any action that could lead to an escalation of tensions.’ Tensions persist between the two countries, which fought a bloody border war that ended in 2000 with the parties agreeing to abide by the ruling of the Eritrea-Ethiopia Boundary Commission. However, Ethiopia’s rejection of the decision reached by the commission in 2002 stalled the physical demarcation of the border in 2003. The Secretary-General urged both parties to respect each other’s territorial integrity.” Also See our Previous Blog for Video Report – “Eritrea: UN Security Council Debates New Sanctions” - www.filmannex.com/posts/blog_show_post/eritrea-un-security-council-to-debate-new-sanctions-by-ambassador-mo/36364 By Ambassador Muhamed Sacirbey – Follow @MuhamedSacirbey Facebook = Become a Fan at “Diplomatically Incorrect” Twitter – Follow us at DiplomaticallyX See more at our Popular Video Blogs & Current News Event Articles at diplomaticallyincorrect.org/c/war-crimes-justice

JohnnyAppl.com - Play and Plant Trees with the United Nations!

Today in am writing about the famines occur in different region of the world. Famine means deficienc…