In the preceding text , I make a introductory text about our previous creation process in the short film " El Paradero de Antonia" or "Antonia's Way". In this present text, I will write about our work with the community of Valparaiso.
We had established in a area known as " Almendral ", viewed from Victoria Square at Avenida Argentina . We focus on two specific communities: a Fair of Avenida Argentina and a Orphanage, a Girls Home called Providence led by nuns.

In the first case, in order to be able to work with the community, had to adapt to their daily life, constantly going to the fair as a team, doing camera tests with the actors, knowing the fairground that usually work at the fair, participating in their events in community, as in celebrations. The activities allowed us to be able to work comfortably with the fairground, who were not affected by our abrupt intervention when we were filming. 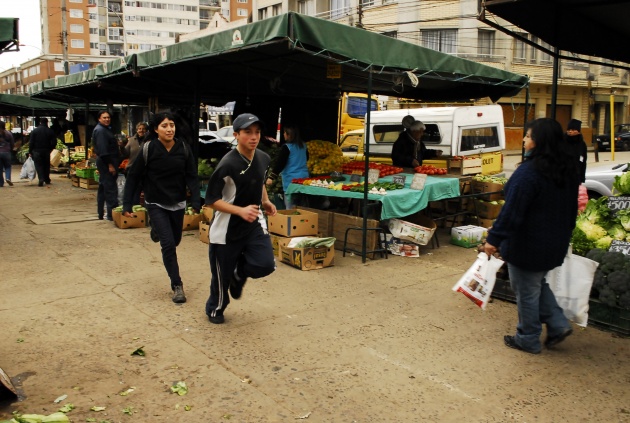 In the second case, we work with a small group of girls who were part of the theater workshop in the orphanage. We had more caution with them, because the issues that the film covered, spoke of their lives, directly or indirectly. Benjamin Ávila, professor of theater workshop, was crucial to the work of preparation for them to participate in a scene from the film. We could not be irresponsible with the girls and their life situations. We exclude select one of them as the protagonist.

An additional fact was the selection of the supermarket: we didn't want to speak with a great brand of supermarket. We prefer to talk with a small supermarket in the sector, which are only in Valparaiso: the supermarket Cencocal. The constant visits to study the lights, the filming schedule, among other activities, talking constantly involved with guards, cashiers, workers, the administrator and owner of the supermarket, who were fascinated with that their supermarket would be part of a film.

In the following text, I'll talk about the process of creating of the image, of the creation of the art and cinematography. And in the subsequent text, I will talk about shooting process.