The wind sighed through the fruit-laden branches that hung over the park bench, sending the apples swaying like dancers in a ballet. The sky stretched overhead, blue and clear and cloudless, but for John Smith, it didn't seem a sunny day.

John sat on the green park bench by the side of the paved walking trail that wound through the park, leaning against the back. His eyes were closed and his head tilted back, the patterns of light and dark cast by the tree twisting across his face. A lady jogged by with earbuds and a stroller, oblivious to the tall man on the bench. He was happy there to sit and watch, or rather, listen, to the world spin around him.

“Mister? Hello?” John opened his eyes, blinking as the sunlight hit them.

“Hello?” He asked, rubbing a hand across his eyelids. He might've fallen asleep, he might not have. It was hard to tell.

A little girl with blonde pigtails and wide, green eyes was standing beside him. One strap of her stained jean overalls was falling down her skinny arm. She pointed at his legs.

John looked down along with her. His mismatched legs were stretched out in the sunlight. One was normal, cotton sock stretching above his ankle and red converse tapping a simple beat on the grass. The other was black metal and plastic, a prosthetic where his leg used to be. He could see why she thought of him as a robot. He rubbed his leg absently, his face dropping into a stern grin. It hadn't seemed like a sunny day to him before, but now it felt grey and stormy.

“Oh, this?” He asked. The girl nodded. “I-I lost my leg in a war a long time ago.” He told her, his voice catching a bit. John shook his head at himself mentally. It had been ages ago. His hand curled into a fist as he remembered and he dropped it back to his side. The red converse foot continued the simple beat. “Do I look like a robot to you?”

The girl looked up at him with big eyes, but John wasn't paying attention to her anymore. When he wasn't looking at it, he could almost forget the war, forget everything that had happened to him... The doctors all called him traumatized, unstable, confused.

“Well, robots are machines” The girl was saying. John tucked his hands inside his coat's pockets. It was getting chilly outside. Somehow, the sun didn't feel quite so warm.

John's arm snapped out of his pocket, a tiny pistol in his fist. There was the muffled noise of a silenced gun and the little girl's head snapped backwards with a splash of red and a bit of a cry. There wasn't anyone around to hear, or care. They told him he was unstable. They were right.

John tucked the gun away inside his jacket again, turning his head away from the child and staring into the distance, past the knotted trunk of the apple tree.

“Well done, bastards. You found me.”

The little girl's head moved upwards unnaturally. John had the aim of an expert marksman. The bullet went where he wanted it. Her head settled back on her shoulders with a clacking like gears fitting themselves back together. One eye was still wide and green. The other was a black, charred hole staring strait through her head.

“We will always find you, John.” The girl's head tilted one way, then back the other. Her face was caught in the shadows of the apple tree now, and she smiled brutally. Her eyes were reflected in

John's glasses, in his very eyes. “There's no where you can hide.” 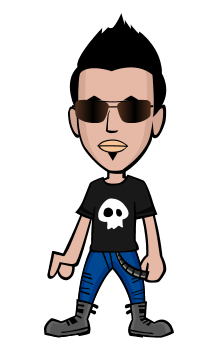