Ah yes, time for another art post. Today I will show you my latest character artwork. I have two of them and I will discuss them one by one. Will do a supervillain mix in a few days. One of them just needs to be colored and such.

Anyway, these two artwork were inspired by a Marvel art contest in the other site. Sometimes I get to see really cool contests there and so I get inspired to draw and create art.

Who would have thought I'd make such art like these eh? Haha. So come on, let's go on this art trip and find out how I made these two.

By the way, both of these are done in kind of an anime style because hey my art is inspired both by the American comics (but more of Jim Lee who is Korean-American) and the Japanese cartoon style. :D 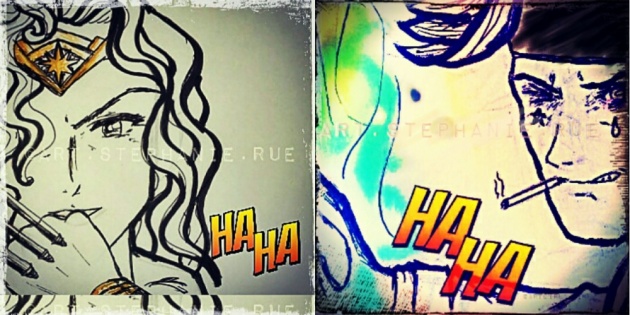 This is the first superhero character mix I did. At first I put a teaser artwork which I'm sure you've seen in my gallery by now. (See image above.)

Would you have guessed it's made up of three characters? Haha. I dunno why I thought of combining them. It's the first thought that popped in my head when I was thinking of what art to create for that contest.

I drew the eyes first, my favorite part to draw, and then from there I drew the hair and adamantium claws. Usually I don't draw using any guidelines at all but since this is a human figure, I just had to draw using guides. Haha. So I did some guidelines for the face and the body then I inked it in and colored it with the pens and watercolor. Oh that was fun.

Here's a short video on parts of my step by step process. Because it's a Marvel contest, I made two illustrations actually, one with no Wonder Woman in the mix and of course the 3-in-1 art. :)

Rogue is my favorite X-Men character. Ever since I read and saw the wonderful and amazing artwork of Jim Lee for Uncanny X-Men, I've been a fan. He put the X-Men on the map my friends! He's my art idol. Haha. So cool, maybe I should write a blog about him too so you will know how awesome he is.

Anyway because she's my favorite Marvel character of course she would be the first one that would come to mind when it comes to anything Marvel. Nevermind Avengers: Infinity War, it's X-Men time!

Oh, I also got inspired to make a fictional short story on how Wolverine, Wonder Woman and her combined into one. It's a bit long so maybe you can just read it here where I posted it.

Basically the story I came up with goes that Rogue absorbed Wolverine's powers temporarily while in a fight. Then flying off to somewhere she was pulled down to an island where she met the Guardians of the Universe in her mind and the real Wonder Woman was with them too. Because the world is in deep danger, she was asked to join forces with Wonder Woman, to which she agreed so voila! Final art below!

The background photo is mine, from when I went to Laque (Laki) beach, Mariveles, Bataan. The finishing touches and additional colors were done on a computer. The gif animation above shows the final coloring process to make this artwork. The final artwork is in my gallery as well but I'll put it here for you. 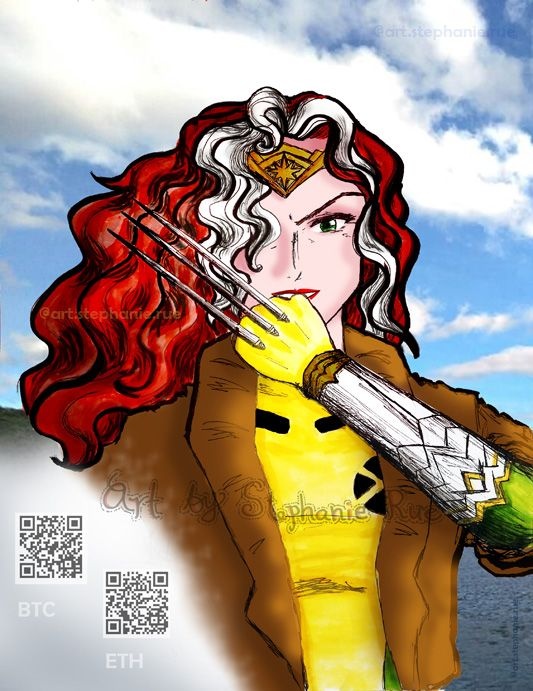 If you'd like the bigger artwork version, prints and products with this illustration are available in my Deviant Art account. Check it out if you'd like some merchandise. For local poster print orders just contact me. (^_^)

Okay so now we go to the next one, another Marvel X-Men character!

Now here's the handsome lover of Rogue. Of course I wouldn't want her to go alone anywhere so I just had to draw her partner. Who wouldn't like someone who looked hot and was such a good bad boy eh? Haha.

Of course I did the teaser artwork first as you can see in the first image above and this one below. This is all done using rough pencil sketches with just one eye inked in. 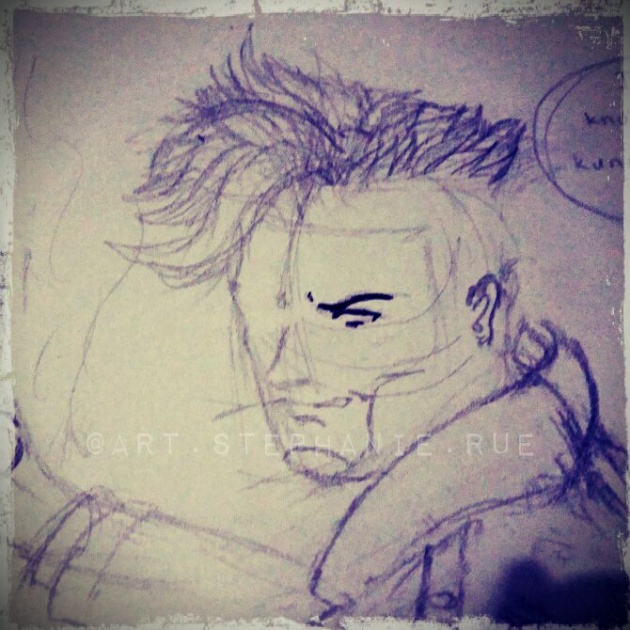 I was not as inspired to make him as when I made Rogue so it took me a while to finish it. I still enjoyed making the artwork so it's all good. Didn't make any back story for how they came to be one person but it's mostly going to go the same route as to how Rogue and Wonder Woman merged into one.

Actually he was supposed to be a mix of three characters as well but I decided to just make it two because if I did keep it at three, it would have been a desecration of the characters. Fans of these characters might hate me, even I would have hated it, if I combined Hisoka with John Constantine and Gambit (Remy LeBeau). Haha, no way. No no noo.

For this character mix, I immediately did some guidelines for the head using the pencil. I dunno man I just really always get technical when drawing Gambit. 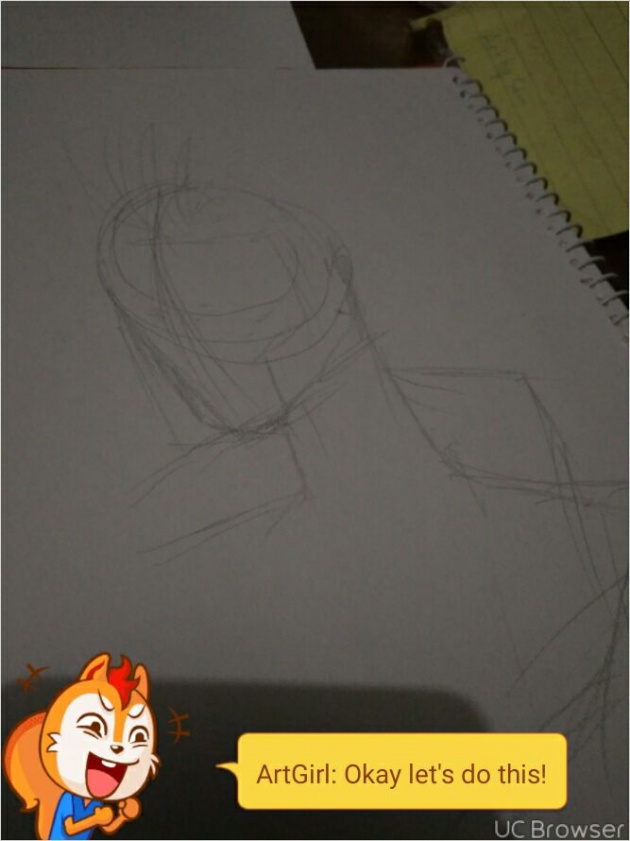 So I drew the head and then the body up until the right and left hand. Of course I had to think of an action pose to be able to draw him since, you know, am not much into drawing guys... I draw more girls than guys because they end up looking like pretty boys if I draw them. Hahaha.

I even had to take a picture of my hand as a drawing model. Sheesh I would need to buy a figure doll if I am going to draw more people/characters. 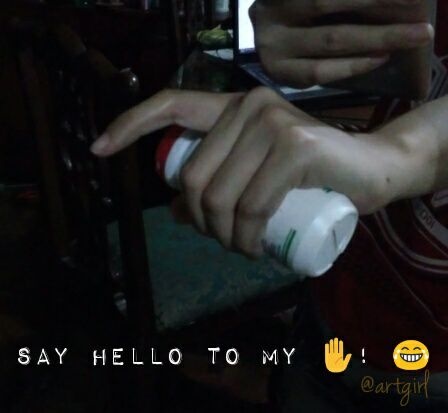 (Photo credit via: ArtGirl via Bitlanders)

I did everything in pencils first and then inked it using the gel pen and the Pigma brush, took a picture of it then put it in my computer for coloring and editing. Oh yeah!

Here's a short video of the drawing process.

I also have a gif animation of my digital coloring process. All the colors are done in Photoshop. The background and fire images are from Pixabay. The rest are all made by yours truly. :D

I also posted the final artwork in my gallery. If you haven't seen it yet, here you go. 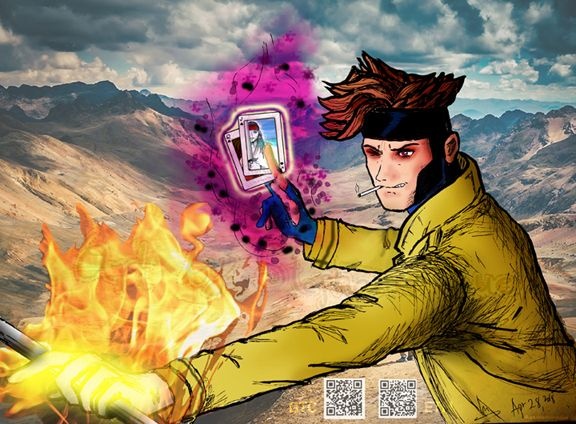 Notice the two cards in his hands? Well I already shared the unfinished Jack one as a "guess who" post here in one of my microblogs. The other one is still not yet done. :D  I think I'll make more character mixes before I get to finish that... :P

Okay, so why did I combine these two characters, you may be wondering. For one thing Gambit is a thief, and next, Constantine deals with the occult and magic so it's a perfect combination! A magician thief! That's awesome! Hahaha.

For the bigger artwork version, prints and some products with this illustration, you can visit my Deviant Art account where it's also available. Check it out if you'd like some merchandise. For local print orders just contact me.

Want to see how the popular and original character design of Jim Lee for Rogue and Gambit looks like? Take a look at this X-Men comics page if you're not familiar with these two. 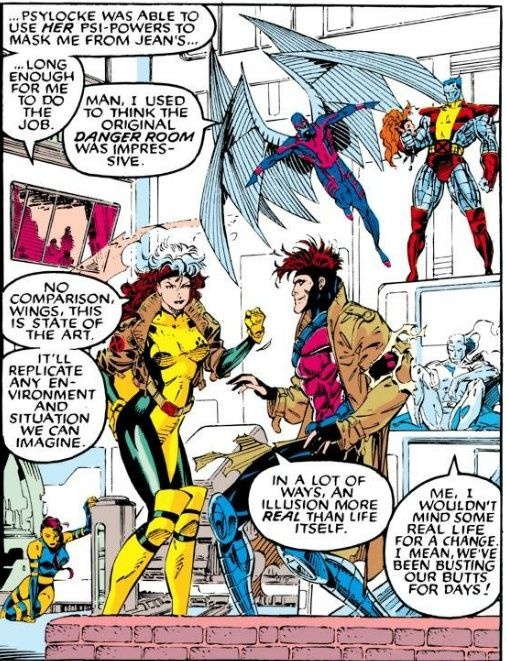 Yeah, I just love them both. How about you? Which Marvel or X-Men character do you like? What do you think of my artwork too? Let me know in the comments. :)

For more of my art and creativity blogs, pls click below:

Most fans show their love for their favorite band by purchasing their songs, attending their live sh…