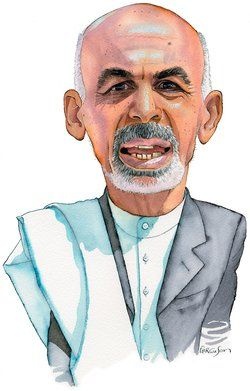 Ashraf Ghani, who has just become the president of Afghanistan, once drafted a document for Hamid Karzai that began:

There is a consensus in Afghan society: violence…must end. National reconciliation and respect for fundamental human rights will form the path to lasting peace and stability across the country. The people’s aspirations must be represented in an accountable, broad-based, gender-sensitive, multi-ethnic, representative government that delivers daily value.

Ashraf Ghani; drawing by James Ferguson
That was twelve years ago. No one speaks like that now—not even the new president. The best case now is presented as political accommodation with the Taliban, the worst as civil war.

Western policymakers still argue, however, that something has been achieved: counterterrorist operations succeeded in destroying al-Qaeda in Afghanistan, there has been progress in health care and education, and even Afghan government has its strengths at the most local level. This is not much, given that the US-led coalition spent $1 trillion and deployed one million soldiers and civilians over thirteen years. But it is better than nothing; and it is tempting to think that everything has now been said: after all, such conclusions are now reflected in thousands of studies by aid agencies, multilateral organizations, foreign ministries, intelligence agencies, universities, and departments of defense.

But Anand Gopal’s No Good Men Among the Living shows that everything has not been said. His new and shocking indictment demonstrates that the failures of the intervention were worse than even the most cynical believed. Gopal, a Wall Street Journal and Christian Science Monitor reporter, investigates, for example, a US counterterrorist operation in January 2002. US Central Command in Tampa, Florida, had identified two sites as likely “al-Qaeda compounds.” It sent in a Special Forces team by helicopter; the commander, Master Sergeant Anthony Pryor, was attacked by an unknown assailant, broke his neck as they fought and then killed him with his pistol; he used his weapon to shoot further adversaries, seized prisoners, and flew out again, like a Hollywood hero.

As Gopal explains, however, the American team did not attack al-Qaeda or even the Taliban. They attacked the offices of two district governors, both of whom were opponents of the Taliban. They shot the guards, handcuffed one district governor in his bed and executed him, scooped up twenty-six prisoners, sent in AC-130 gunships to blow up most of what remained, and left a calling card behind in the wreckage saying “Have a nice day. From Damage, Inc.” Weeks later, having tortured the prisoners, they released them with apologies. It turned out in this case, as in hundreds of others, that an Afghan “ally” had falsely informed the US that his rivals were Taliban in order to have them eliminated. In Gopal’s words:

The toll…: twenty-one pro-American leaders and their employees dead, twenty-six taken prisoner, and a few who could not be accounted for. Not one member of the Taliban or al-Qaeda was among the victims. Instead, in a single thirty-minute stretch the United States had managed to eradicate both of Khas Uruzgan’s potential governments, the core of any future anti-Taliban leadership—stalwarts who had outlasted the Russian invasion, the civil war, and the Taliban years but would not survive their own allies.
Gopal then finds the interview that the US Special Forces commander gave a year and a half later in which he celebrated the derring-do, and recorded that seven of his team were awarded bronze stars, and that he himself received a silver star for gallantry.

Gopal’s investigations into development are no more encouraging. I—like thousands of Western politicians—have often repeated the mantra that there are four million more children, and 1.5 million more girls, in school than there were under the Taliban. Gopal, however, quotes an Afghan report that in 2012, “of the 4,000 teachers currently on the payroll in Ghor, perhaps 3,200 have no qualifications—some cannot read and write…80 percent of the 740 schools in the province are not operating at all.” And Ghor is one of the least “Taliban-threatened” provinces of Afghanistan.

Or consider Gopal’s description of the fate of several principal Afghan politicians in the book:

Part1 Maybe what they say is true that; what happens today will be the opposite of yesterday, that i…