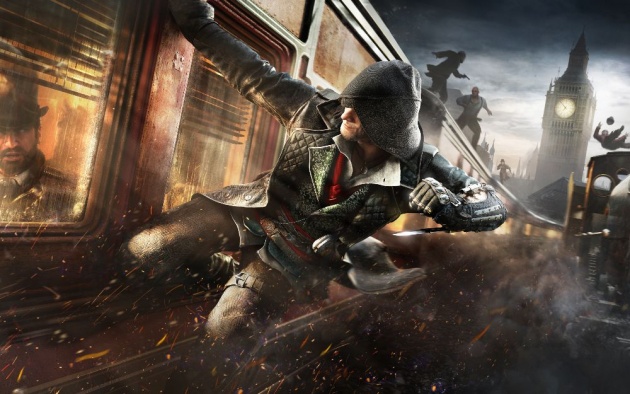 So what did they do make Assassin’s Creed series enjoyable again.

Syndicate’s plot takes place in Victorian era. It’s the 19th century in England and many new inventions like trains have been invented. Jacob and Evie Frye are the main characters who are twins and (as rumors says) both playable. The cities are under Templar reign (as usual in Assassin’s Creed series) and Fryes gather and army of poor to rise up to the rich Templars and put a stop to their rule.

As developers say, the game will be more focused on Single player than Multi player.

Gameplay has major differences from the last games.

Syndicate takes place in modern London. There is many buildings and fewer trees. It makes feelings of Assassin’s Creed II come back.

The game is now more focused on close combat than range combat. Hand to hand combat is a critical difference to the series, but I think fans will love it.

Jacob (or Evie) is equipped with hidden blades, throwing knives, kukri, six-shot revolver and a pair of brass knuckles.  These weapons are hidden in Jacob’s coat, as civilians can’t be seen carrying weapons in the Victorian era.

Syndicate’s parkour is very easy as there’s an Assassin’s Gauntlet. (It’s more like Batman’s Bat-claw). Players now can zip-line across buildings and climb up buildings in matter of seconds.

Stealth is pretty different than previous encounters. Player can toggle between stealth and parkour modes. It’s more hiding behind object than blending in the crowds in Syndicate. Jacob can whistle or use the environment to distract enemies.

Instead of horses, boats and ships we have carriages and trains in game. Trains may not be playable but carriages surely are. Player can capture carriages as the same way you capture vehicles in GTA. Also Player can climb top of a moving carriage or train, even combat can be taken place on them (or you can catch a free ride on them). Carriages actually take damage.

(It’s pretty much GTA in vehicle part, if you ask me)

AI has been improved dramatically. People react for what is happening around them. If guards see a dead body they get suspicious but they doesn’t spot you or know how you had commenced the kill (or who had).

The game is to be released on 23rd of October for Xbox One and Playstation 4 and 19th November for PC. However, Playstation 3 and Xbox 360 won’t get Syndicate.

Hope you enjoy my preview. Please buzz me and leave a comment what you think about the game.