At least 16 dead as jet crash-lands in Taiwan 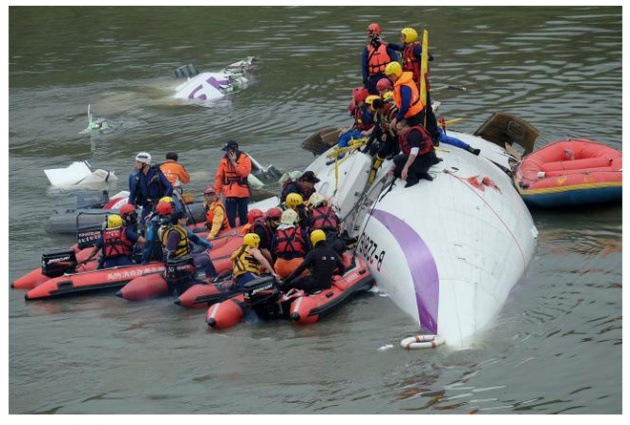 At least 16 people were killed Wednesday when a turboprop passenger plane operated by TransAsia Airways clipped a road bridge and plunged into a river in Taiwan, in the airline’s second crash in just seven months.

Dramatic amateur video footage showed the TransAsia ATR 72-600 turboprop plane hit the road bridge as it banked side-long towards the water, leaving a trail of debris including a smashed taxi.

“I saw a taxi, probably just metres ahead of me, being hit by one wing of the plane. The plane was huge and really close to me. I’m still trembling,” one witness told TVBS news channel.

Rescue officials said that 15 survivors had been pulled out of the wreckage, but that 16 people were believed dead and 27 were still missing. Many of those on board were Chinese tourists.

It was the second serious incident involving a TransAsia Airways plane in a few months after another flight operated by the domestic airline crashed in July during a storm, killing 48 people.

Wednesday’s accident happened just before 11:00 am (0300 GMT), shortly after Flight GE235 left Songshan airport in northern Taipei en route to the island of Kinmen, with 58 people on board including five crew members.

“We would like to convey our apologies to the families (of the victims) and we’d also like to voice huge thanks to rescuers who have been racing against time,” said Chen.

Lin Kuan-cheng from the National Fire Agency shortly after said that six people were dead, with 10 showing “no signs of life” -- the term used before death is officially confirmed. Fifteen people had been rescued with 27 still missing.

Those missing are thought to be trapped inside the submerged front section of the plane.

“The focus of our work is to try to use cranes to lift the front part of the wreckage, which is submerged under the water and is where most of the other passengers are feared trapped,” a senior rescue official told reporters at the scene.

He later said that the black boxes from the plane had been recovered -- there is no official indication yet of what caused the crash.

As time ticked away for those inside the fuselage, rescue boats surrounded the wreckage which remains in the middle of the river, with 400 soldiers drafted in to help.

Emergency crews standing on sections of the broken fuselage tried to pull passengers out of the plane with ropes. Those who were rescued were put in dinghies and taken to the shore.

With evening approaching, lighting equipment would be brought in and a floating bridge put up to help the operation, officials said.

China’s Xiamen Daily said on its social media account that the 31 mainlanders on board were part of two tour groups from the eastern Chinese city.

Xiamen is in Fujian province, which lies across the Taiwan Strait from the island.

An employee of one of the tour agencies, surnamed Wen, told AFP that it had 15 clients on board, including three children under 10, and a tour leader.

“It’s an emergency,” she said. “We’re working with different work teams. We’re trying to arrange for the relatives to go to Taiwan.”

TransAsia’s Chen said that of the 31 passengers from the mainland, three were children.

Aviation officials said the plane crashed minutes after taking off Songshan airport, after losing contact with the control tower.

Lin Chih-ming, head of Taiwan’s Civil Aeronautics Administration, said the ATR 72-600 was less than a year old and was last serviced just over a week ago.

The airline said they had received the plane in April last year and it was the newest model of the ATR.

In last July’s crash, the 48 people were killed when another domestic TransAsia flight crashed onto houses during a storm on the Taiwanese island of Penghu.

The ATR 72-500 turboprop plane deviated off course before plunging into the houses after an aborted landing during thunder and heavy rain as Typhoon Matmo pounded Taiwan at the time.

The flight’s pilots could not see the runway but had continued to descend anyway, Taiwanese authorities said in December. Two French nationals were among the dead.