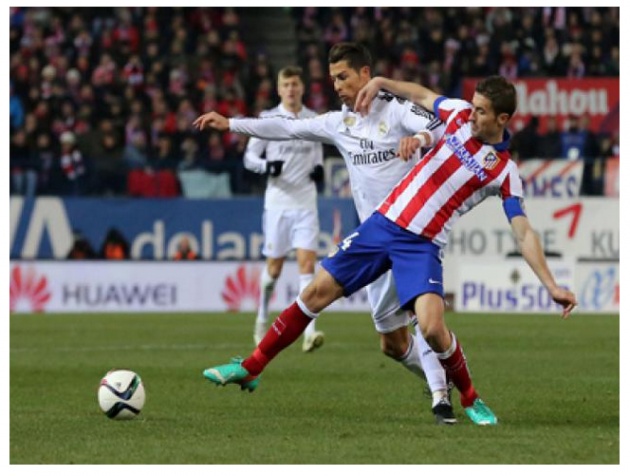 Fernando Torres tasted victory against Real Madrid as an Atletico Madrid player for the first time as the La Liga champions downed their city rivals 2-0 in the first leg of their Copa del Rey last 16 tie on Wednesday.

Despite a disappointing performance from Torres on his first appearance since rejoining Atletico on loan from AC Milan, the hosts beat Real for the third time in four attempts this season thanks to Raul Garcia's penalty and a thumping header from Jose Gimenez after half-time.

Last season's Cup winners will now have it all to do when the two sides meet again for the return leg at the Santiago Bernabeu on January 15.

"We have a chance. It is clear that Atletico have the advantage but at home anything can happen. The odds aren't in our favour but we will try our best," said Real boss Carlo Ancelotti, whose side have now lost back-to-back games to start 2015 after a run of 22 consecutive victories.

Meanwhile, his counterpart Diego Simeone refused to accept that the tie was now Atletico's to lose.

"We have a lot of respect for Real Madrid. They have a great coach and great squad and the tie is definitely not over."

Both coaches signalled that their priorities lay elsewhere prior to kick off as Cristiano Ronaldo was left on the bench by Ancelotti, whilst Simeone made seven changes to the side that beat Levante 3-1 at the weekend.

However, the hosts were indebted to one of those coming into the side after just two minutes when Jan Oblak brilliantly parried a towering header from Sergio Ramos, reminiscent of his equaliser in the Champions League final between the two sides in May which swung the match in Real's favour.

The visitors then had a goal rightly ruled out from another setpiece as Gareth Bale was flagged offside when he headed James Rodriguez's free-kick into the far corner.

Straight from the free-kick, Atletico then had their first effort on goal as Oblak released Antoine Griezmann with a long ball and his low effort was turned behind by Keylor Navas.

Griezmann was then presented with Atletico's best chance of the opening 45 minutes when he robbed Rafael Varane and closed in on goal, but his French international team-mate recovered to avert the danger with a fine last-ditch challenge.

Torres, meanwhile, was enduring a nightmare opening half as he consistently gave the ball away and was caught offside on numerous occasions.

Real passed up a couple of half chances to go in ahead at the break as Benzema fired straight at Oblak before Sami Khedira headed over when unmarked inside the area.

The visitors also had the first opening of the second period when Bale prodded wide from a narrow angle.

However, it was Atletico who finally made the breakthrough when Garcia was adjudged to have been pulled down by Ramos and the midfielder composed himself to fire low into Navas's left-hand corner.

Torres's evening ended early as he was replaced by Koke, while Ancelotti quickly summoned Ronaldo from the bench in the bid for an away goal, with Rodriguez making way.

Yet, the World Player of the Year made little impact on Atletico's well-marshalled defence and centre-back Gimenez then proved to be a star at the other end as he rose highest to power home Koke's corner 13 minutes from time.