Avocado Seed: Should You Eat It or Not?

Who's the avocado lover here raise your hands!!! Hahaha, well it is not my favorite fruit but I like to eat avocado as a dessert when I can. Because I have eaten the last of the three avocados, I got inspired to write about this amazing fruit. 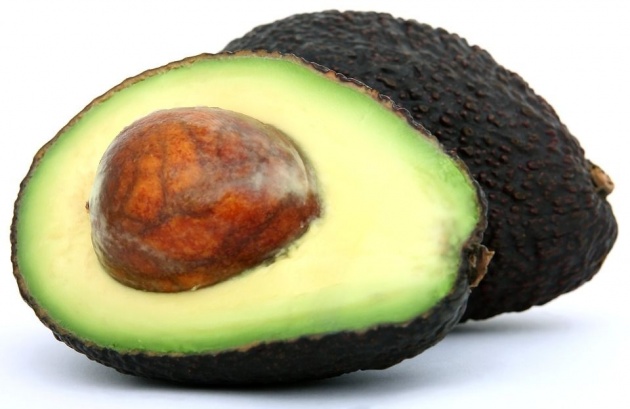 The avocado is said to have originated in Mexico which is also the place where the Aztecs come from, the people who are the main etymological source of the word for it. A carbon dated avocado plant from Peru is said to have been from 8,000 to 15,000 years ago which makes us conclude it must have existed first during the Mesolithic period of the Stone Age.

Mexico is also the world's largest avocado growing country. What do we expect if it is supposedly where the avocado originated, right? Haha.

In the Philippines, the avocado was first brought by the Spaniards and believed to have been introduced during the galleon trades in the late 16th century. Several varieties were also brought here from Cuba in 1906 and then Florida in 1906 and 1907. 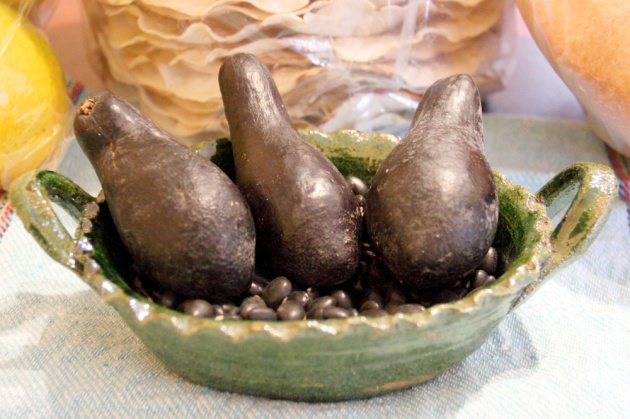 This fruit is not as popular as it's sweet counterparts like mango and pineapple but there has been a recent boom in demand for this natural produce.

In March 2016 a viral video went round the social networks as it claimed eating the avocado pit is a healthy addition to any smoothie or baking for a boost in antioxidants etc. The video didn't reach me or my friends I think but I found a blog that was posted before the video that also claimed we should add the seed powder to our smoothies, shakes and other food in order to take advantage of its nutritional benefits. It's source was from a January 2016 health blog.

Because of the viral video, a lot of people began asking questions if it is indeed safe to eat the seed or put it in food etc. Further online research will take you to lots of info with the avocado experts all not recommending to eat the pit at all and yet a lot of health food blogs still suggest to add it to food and drinks because it is supposedly a superfood.

In 2017 it was said that the avocado craze (the fruit and not only the seed)  hit Asia. Well maybe in Korea and other Asian countries only because in the Philippines, or me personally, I've never seen anyone talking about it, not even in my Facebook newsfeed or anywhere online. Perhaps because I am also not too much of a health nut or vegan that's why I've never heard of the seed craze until today. 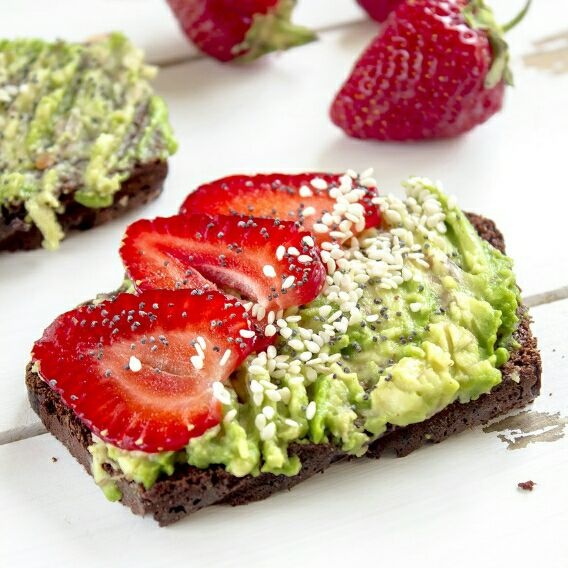 Long before eating the avocado seed became a popular issue in 2016, ancient tribes and people have been using the avocado and several plant parts for medicinal purposes. It is only a rediscovery of ingesting this seed that has people all abuzz because most people do not eat it at all and just throw it away.

Eating the flesh of the avocado is healthy but the seed consumption needs more research. Watch this video to learn how healthy and beneficial this fruit is.

♠ Environmental Impacts of the Avocado Craze ♠

Apparently due to the increase in avocado demand, forests in Mexico have been reduced to make way for more avocado orchards/farms. Aside from illegal deforestation, along with the increase in orchards come the insecticide and pesticide problem that affect people's health negatively. 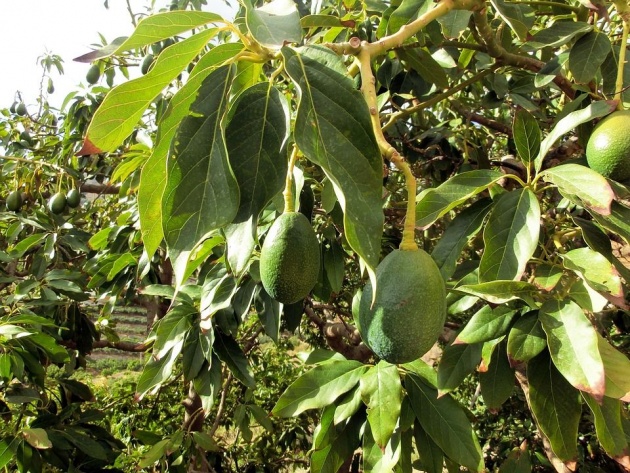 Who knows if the Dominican Republic, Peru or other same fruit producing countries are also suffering from this because of the clamor for more avocado? I feel like it's the same with harvesting sea cucumbers. Those are harvested in the sea but most of the time they are just left untouched by other people who are not into such food when it is presented to them. Such a waste of natural resource that help make the ocean less acidic. These days it is undoubtedly getting depleted slowly but surely day by day in the ocean floor.

There is good that comes out of this though. Because this craze can produce tons of wasted seeds, some people found a way to commercially make good use of it. Apparently the pit can be used as a source of ingredient for bioplastics thus it becomes utilized for the good of the environment. There is a Mexican innovator who discovered this and is now using it in their bioplastics company. An Indonesian University also did an experiment in 2015 if the avocado seed starch is indeed good to make bioplastics and they had found that it is indeed possible. Thus if avocado seeds are used for other things except food then perhaps the environment will be better off with it. 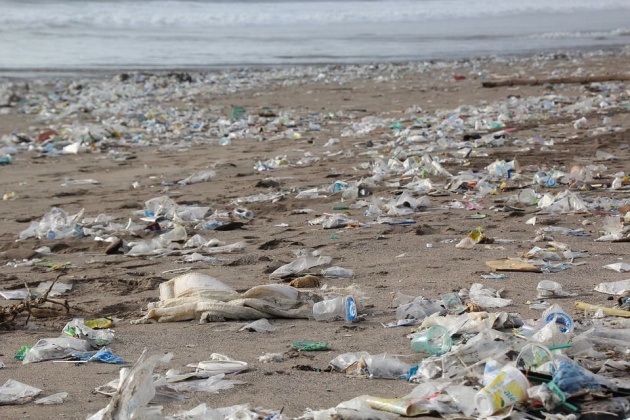 Aside from being rich in fiber, the avocado seed also has tannin, a colorant that turns the flesh and its seed orange or reddish when exposed to air/oxygen. In 2016 a natural food coloring company was created out of the experiment done from extracting the orange coloring from the avocado seed in the process of extracting the starch. This discovery has definitely helped provide more natural sources on food coloring making it a healthier choice than artificial ones.

If additional studies can be done on it rather than human ingestion I believe we will be able to have more useful products out of it. 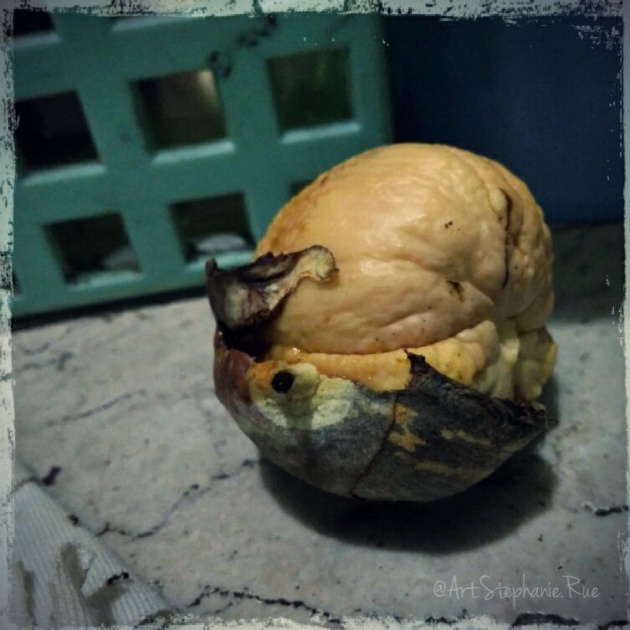 According to several scientific research, the avocado seed can be poisonous or dangerous to pets or some animals but not to humans. What makes it dangerous is the persin content of the fruit pit. Persin is a natural toxin and fungicide which is generally harmless to people unless one is allergic to it.

The avocado seed extract has been praised for it's benefits, it is not the same with consuming the seed itself even if in powdery form. Nutritionists and health experts agree that more study and research needs to be done before they can say it is good to eat the seed. 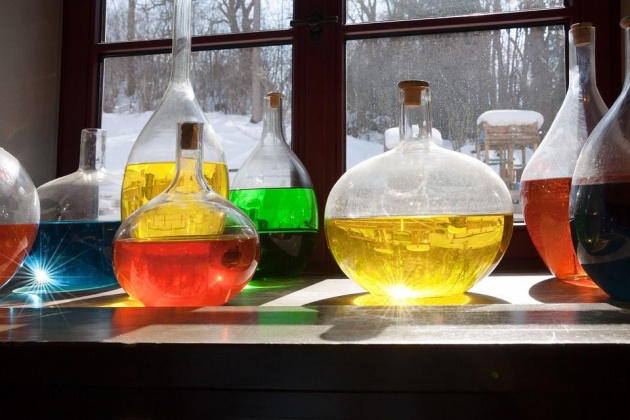 This roundish and bitter fruit part and it's extract is said to be good for Alzheimer's Disease, beneficial for better cardiovascular health and that it has insecticidal, fungicidal, and anti-microbial properties. Remember that these studies were done on the seed extracts and not the seed itself as food to consume.

Even if the health experts do not advocate eating the seed, food bloggers and health blogs have been telling people to blend the powdered seed into their shakes and smoothies etc. If ancient people believe in the therapeutic and health benefits of eating it but modern science still has no clear evidence on it, perhaps it is best to find it out for yourself. 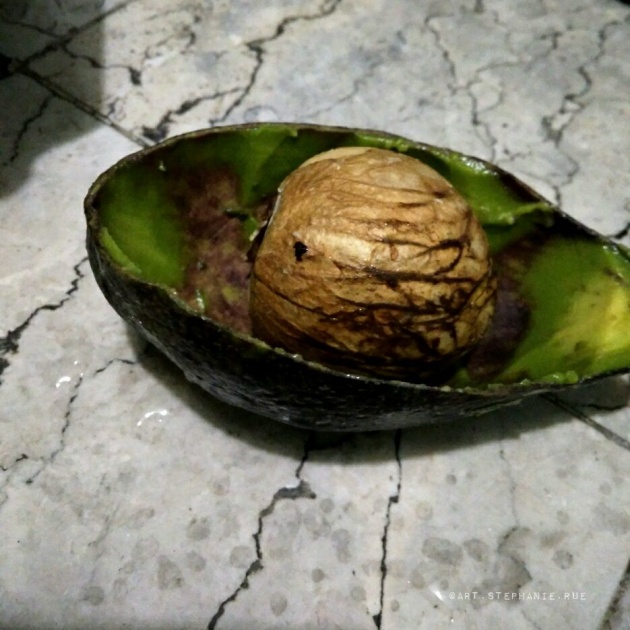 Out of curiosity I cooked two avocado seeds from the fruit I bought a week or so ago. I first boiled one seed like a peanut and surprisingly got a purplish liquid as a result. Once the liquid was gone I still continued cooking it and kind of fried it but it still didn't look like it was going to be good to eat so eventually I just took it out of the non-stick pan and put it in the refrigerator because I had my doubts on it being edible.

As for the second seed, I did almost the same thing but I added vinegar and soy sauce to it. Didn't notice any more purplish liquid of course because of the soy sauce so eventually I fried it as well. I took out the other seed from the refrigerator and fried it together with the 2nd seed. 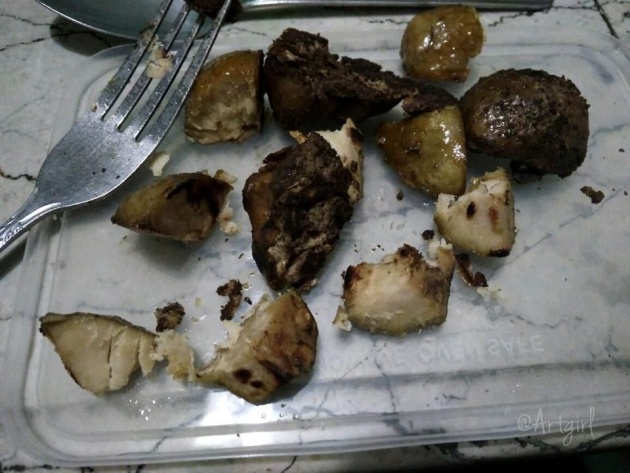 The time came when I had to taste it and boy did I regret ever cooking the seeds. Just a bite of a slice of it (as shown above) was super bitter like you just chewed on solid beer. No way am I gonna stomach that so I tried to add more salt to it and boil it some more but it still turned out overpoweringly bitter that I just threw it away. Oh what a waste but what an experiment! 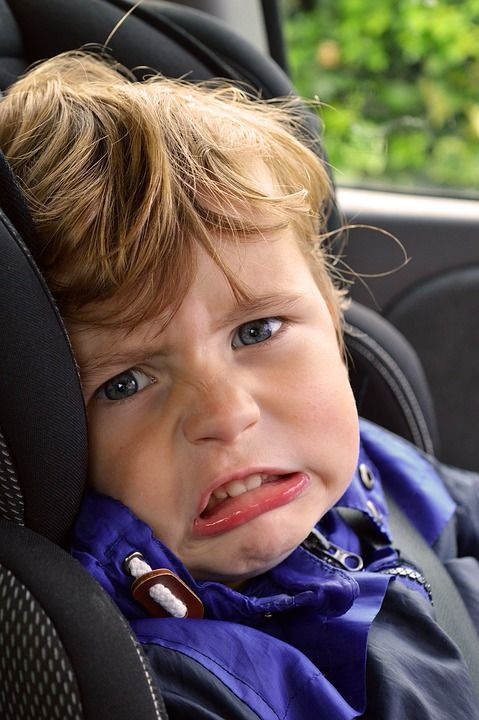 It's texture was like something in between a sweet potato and a potato. It was not firm like a potato but it was not too soft like a sweet potato. I think it's like a castañas but I'm not sure because it is so bitter that I forget everything else that's unique about it and just rinsed my mouth out.

Some people say the seed should be roasted in order to remove the bitterness but someone tried roasting it and said it was still bitter after it was roasted. That person even boiled it 3 times for five minutes each just to try what someone suggested to remove the bitter taste. The bitterness was indeed reduced but it still had a bitter aftertaste. Maybe we should try roasting it and see for ourselves eh?

After all that's said and done, I do not recommend eating the seed at all but of course it is up to you if you'd still like to eat cook and eat it. If you will eat it, mix it in other food so the bitter taste will not be noticeable.

So, will you be eating it in the future? Good luck if you do! :D

For my other food and health related blogs, click below:

10 Amazing Things From the Avocado Seeds We Just Waste

Do you like eating avocados? What do you do with the big seed though? Did you know it's something yo…