BAMIYAN: THE PYRAMIDS OF AFGHANISTAN CULTURE 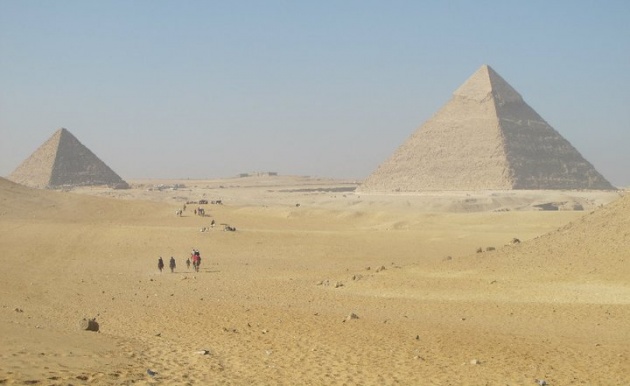 There are monuments in the world that exert the type of charisma that transcends geographic borders and brings cultural differences together. Monuments we have heard about since we were so little we can't even remember. Monuments that have captured our imagination throughout our life, and that will always be on our bucket list until we finally go and see them in person.

The Pyramids and the Sphinx in Giza provide an obvious example. Universally known, these monuments have stood the change of times - and regimes - for 4500 years. Through its long history, Egypt has gone through deeply diverse political systems, but nobody has ever questioned the importance that these monuments represent for the artistic and cultural heritage of this country. There's a deep respect for the kings who were buried there, and if you ask the Egyptians themselves, it would be a challenge to find anybody who wouldn't feel proud of their ancestors.

Last week, Morgan Al-Gohary - a jihadi sheikh with a history of radicalism - announced more than once on an Egyptian TV channel that if his group came to power they would destroy the Pyramids and the Sphinx. According to their ideologies, every pagan idol should be persecuted and destroyed, because it's an insult to their own beliefs.

After their announcement, I can't help remembering what the Talibans did in Bamiyan in 2001. Bamiyan has always been know for two colossal Buddha statues carved into the side of a cliff in the Bamiyan valley, 140 miles northwest of Kabul, Afghanistan's capital. Situated on the Silk Road, Bamiyan represented a lively center for religion, philosophy, and art. Monks lived as hermits in many monasteries as well as in small caves carved - pretty much the way the big Buddhas were - into the side of the Bamiyan mountains. The two statues used to measure 180 and 121 feet. Before being destroyed, they were undoubtedly the most famous cultural landmarks of the area. Listed in the UNESCO list of World Heritage Sites, they were the tallest examples of standing Buddha carvings in the world. The Talibans placed dynamite charges at the site, and blew them up 11 years ago. This was a symbol of their intolerance that earned unanimous global condemnation, because they destroyed not only one of the most beautiful monuments in the country, but also one of the most important cultural sites in the world.

Bamiyan was a murder of the Afghanistan culture, a blow to the education in Afghanistan, a colossal loss for mankind operated by mankind.  Also, the country could have gained from developing sustainable tourism in the area, further improving the economy of Afghanistan. I have chills thinking about what could happen to those Egyptian treasures.

I stood in front of the Pyramids 2 years ago. I took a wide loop around the complex to avoid most tourists and experience them on a more private level. I couldn't take my eyes off their charm. My visit was supposed to last a few hours, but I just couldn't leave, and stayed the whole day. I was fortunate to see them with my own eyes, and I wish everybody had the same opportunity in the years to come. On this other hand, I never made it to the Buddhas in Bamiyan in time. They were blown up before I could make my pilgrimage.