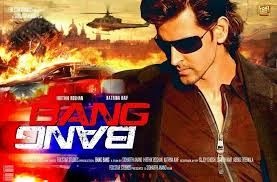 After Krish 3, Hrithik Roshan is all set for his upcoming movie “Bang Bang” directed by Siddharth Anand. In the movie Hrithik Roshan will be playing the lead role and his lady love will be none other than Katrina Kaif.  Bang Bang is the official remake of the famous Hollywood movie “Knight and Day” starring Tom Cruise and Bad Teacher actress, Camaron Diaz.

So it can be safely said that Hrithik will be playing the character of Cruise and Katrina, the role of Diaz in this much awaited Bollywood movie. Bang Bang is going to be released on the 2nd of October 2014. The movie is produced and distributed by one of the most successful media houses - Fox Star Studios.

Cast of the movie Bang Bang

The cast of Bang Bang comprises of a mixture of beauty and talent which will swoon the viewers with charm and acting skills as soon as they start watching this movie. Nonetheless here are the names of the actors who are present with Bang Bang. The characters of Hrithik Roshan and Katrina Kaif are known as Rajveer Nanda and Harleen Sahni in the movie.

Bang Bang brings back one of the most appreciated veteran actors whom you all have seen, though mostly in negative role - Danny Denzongpa and he plays the character named Omar. Rest of the cast includes Jaaved Jaffrey, Pawan Malhotra, Kishan Gohel, Préity Üupala, Parth Akerkar and Jimmy Shergill who plays the role of an army personal in the movie.

Other Important Facts of the Movie “Bang Bang”

The shooting of the movie was done in several places all over the world. The very popular water action done by Hrithik took place in Greece and Thailand. The other places where Bang Bang was shot are Abu Dhabi, Shimla, Delhi and Manali. The film’s budget is a whopping 1.3 billion rupees. Wow!!