Police in Bangkok say they have arrested a man in connection with a bomb that killed 20 people in the Thai capital nearly two weeks ago.

The man, a foreigner, was arrested in Nong Jok on the outskirts of Bangkok, a police spokesman said.

Bomb-making materials were found at the apartment along with 10 passports, said the spokesman, Prawut Thavornsiri.

The bomb tore through the crowded Erawan Shrine on 17 August injuring more than 100, mostly tourists.

Police said bomb-making material found at the apartment, including ballbearings and piping, was of the "similar or same type" used in that attack.

Mr Prawut said they believe the 28-year-old man they arrested "is a culprit in the same network".

But national police chief Somyot Pumpanmuang downplayed any suggestion that the suspect was connected to terrorism.

"He is a foreigner, but it's unlikely that he is an international terrorist, it's a personal feud," Mr Somyot told a televised news conference.

"He got angry on behalf of his friends and family members," he added, without elaborating.

Photos handed out by the police show a man with short dark hair and a beard and wearing a yellow shirt and trousers sitting handcuffed at the house.

But he may not be the prime suspect who was seen on security camera leaving a backpack at the busy shrine shortly before deadly the blast earlier this month.

A photofit image was released showing the suspect with dark hair and glasses. 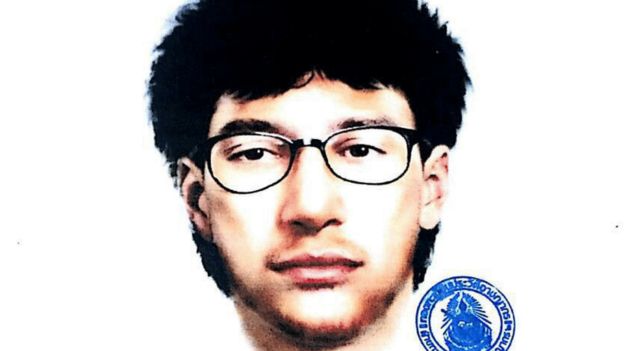 It is also not clear from which country the passports came - although many unconfirmed reports suggest they are from Turkey.

Certain errors contained in the documents suggest they are fake, reports the BBC's Jonathan Head, in Bangkok.

Police said at the time of the attack that they suspected it had been planned a month or more in advance and involved at least 10 people.

A reward of one million Thai baht ($28,000; £17,950) has been offered for information but it is not known whether this played a part in Saturday's arrest.

The shrine is a popular destination for Chinese and Thai tourists.