Indonesia is acknowledged for its cultural and ethnic diversity. This diversity became one of Indonesia's attractiveness in the eyes of the world. One part of Indonesian culture is the traditional wedding party. All elements of the wedding procession started from the customary fashion, wedding decorations, to the procedures for meaningful tradition, offers its own uniqueness.

As one of the ethnic group with the largest population in Indonesia, Minangkabau's wedding traditions is a traditional wedding party that is usually found in Indonesia. Minangkabau itself consists of several areas called "nagari" (village). Each "nagari" has its own characteristics wedding dress. In addition, the use of jewelry such as bridal headdress worn by the bride also differ. However, basically any Minangkabau traditional wedding feast characterized by stately, luxurious and festive with shades of gold and silver on the altar. As well as for a wedding dress, it's generally in the form of three-dimensional.

...The Altar of Minangkabau Wedding... 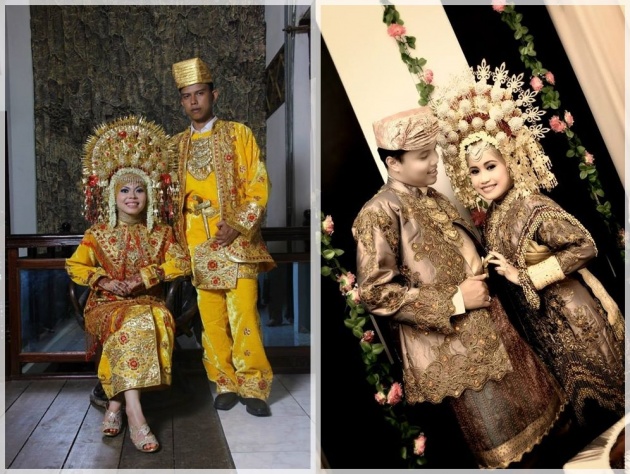 Both are my friend on their wedding day ^_^

Basically, the wedding procession consists of several stages. Here, I will outline key explanations of each stage.
Note: All pictures below are my personal collection from my friend's wedding :)

This is an introductory stage between the soon-to-be bride and groom. In accordance with the kinship system in Minangkabau, the bride's family went to the groom's family. Traditionally, the bride's family who come will bring souvenirs such as cakes or fruits; according to the manners of eastern culture. 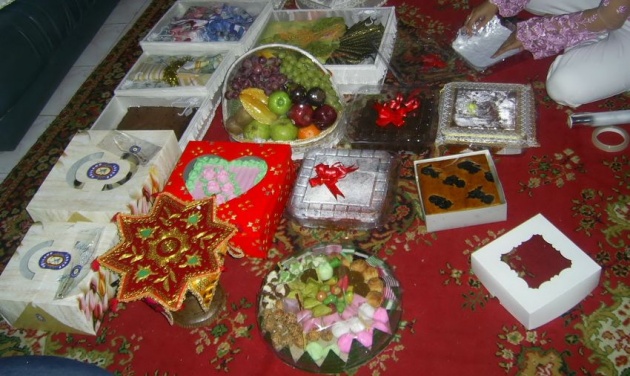 Next is the exchange of family heirlooms between the two families. Objects that are exchanged are usually like a dagger, custom cloth or other objects that have historical value for each party. These objects will be returned in an official event after the wedding ceremony is completed. The last process is deliberation to discuss the procedures for pick-up the groom. 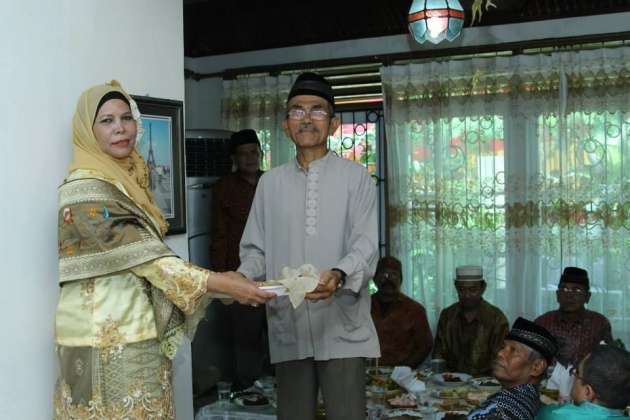 3. Mahanta (A Permission for Elders)

The groom will preach and ask blessing for his marriage to his uncles, the brothers of his father, his brothers who had been married and elders who are respected. A similar process is also performed by the bride, represented by the bride's relatives who are married by delivering the betel to the elders. For the groom, they bring "selapah" containing palm leaves and tobacco (but it's been replaced with a cigarette). This ritual is intended to inform and asked for prayers for the wedding plans. Usually families who attended will provide assistance to share the burden and the cost of the wedding according to their ability. 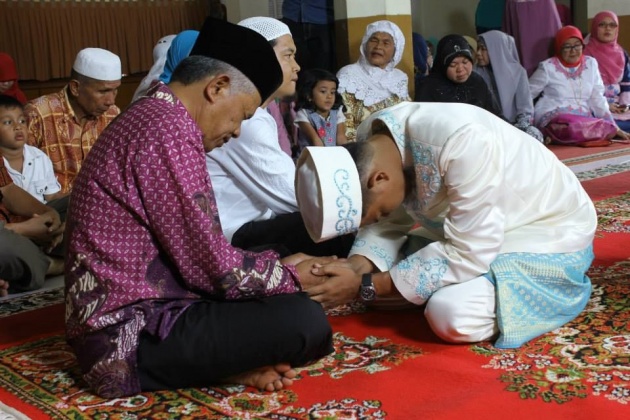 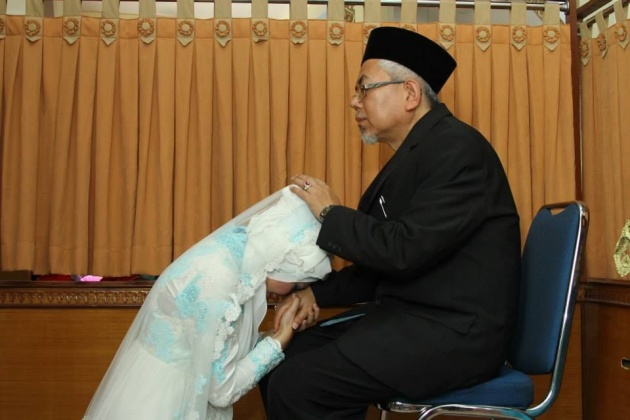 The family of the father of the prospective bride (called bako) wants to show their affection to participate according to their ability to bear the costs of wedding. The assistance usually in the form of betel, yellow rice with chicken singgang (traditional food), as well as the conduction of goods needed by the bride as a set of clothes, gold jewelry, side dishes, pastries and so on. By tradition, the prospective bride was picked up to be taken to the family home of his father and then the elders give their advice. The next day, the prospective bride would be marched back to her house accompanied by her paternal family by bringing a wide range of relief goods earlier. 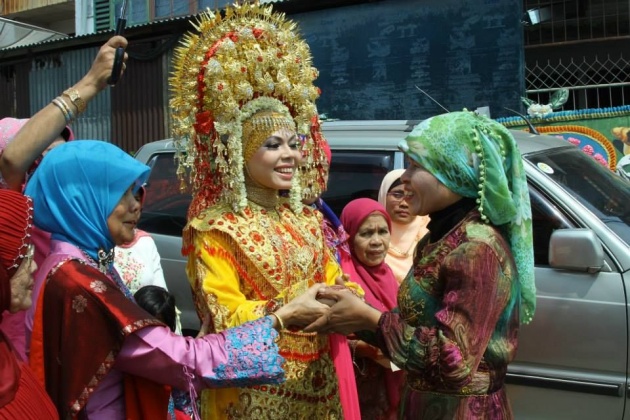 Bainai means to embed the smooth paste of henna leaves on the nails of the bride. Typically, this procession takes place at night before the wedding ceremony. This is an expression of the blessings from the elders of the bride's family. Equipment used include: water containing seven kinds of flowers, delicate henna leaves, yellow umbrella, several Minangkabau's traditional fabrics, and chair of the bride. The bride wearing a dress called "tokah" and a headdresses while she taken out of the room flanked by her peers. 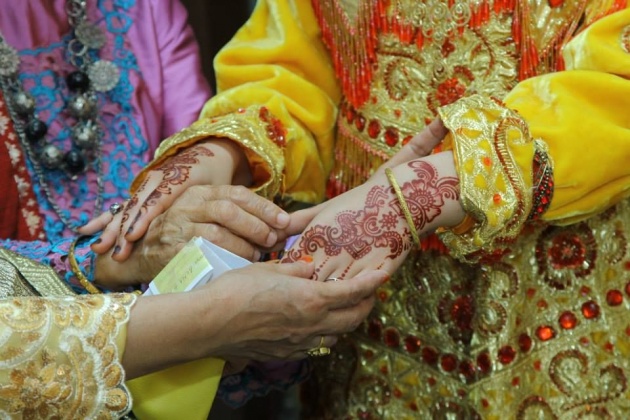 This is the most essential ceremonies in a whole series of marriage according to Minangkabau's Wedding Tradition. Grooms will be picked up and taken to the house of the bride to hold the ceremony. The procession is also accompanied by granting title to the groom as a sign of his maturity. Typically, the family of the bride must bring a betel in "Carano", the groom's clothes, yellow rice with chicken singgang (traditional food), side dishes, pastries and fruits. These goods as a sign of good faith from the family of the bride. Envoys from the bride's family would pick up the groom carrying the goods. After the procession "sambah-mayambah" and explication the purpose of their arrival, the goods will be handed over to the groom's family. Grooms with his entourage would be marched to the residence of the bride. 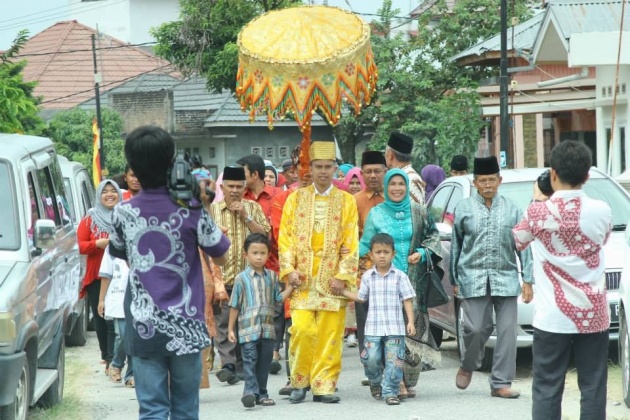 The tradition to welcome the groom in the bride's home is usually a festive moment. Accompanied by the sound of Minangkabau' traditional music, the arrival of the groom greeted by rows of "Galombang Pasambahan" dancers, which is consist of young man dressed in martial arts custom as well as girls in traditional dress while presenting the betel. Throughout the procession, the groom will be housed within the family of the bride. Furthermore, the elders of the bride will strew the grooms with yellow rice. Before entering the house, the foot of the groom sprinkled with water as a symbol purify and groom will run up the white cloth heading to the venue for the ceremony. 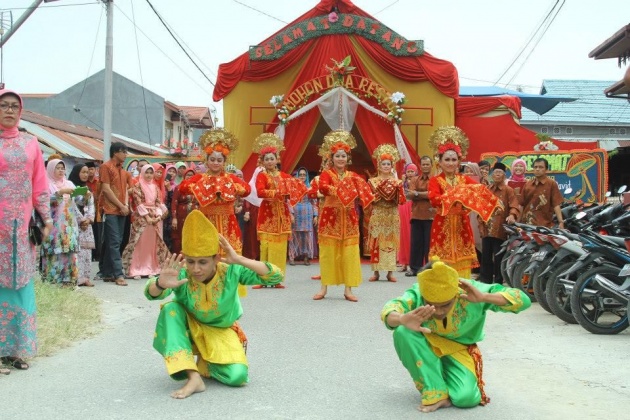 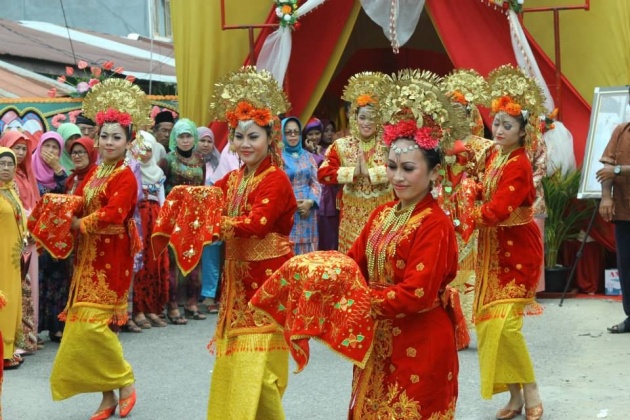 8. Ritual After the Wedding Ceremony

There are five common Minangkabau's event which held after the wedding ceremony.

After officially became husband and wife, the marks given as a sign of a binding promise during the proposal process will be refunded by both sides, because the goods have historical value and both families have become one family. 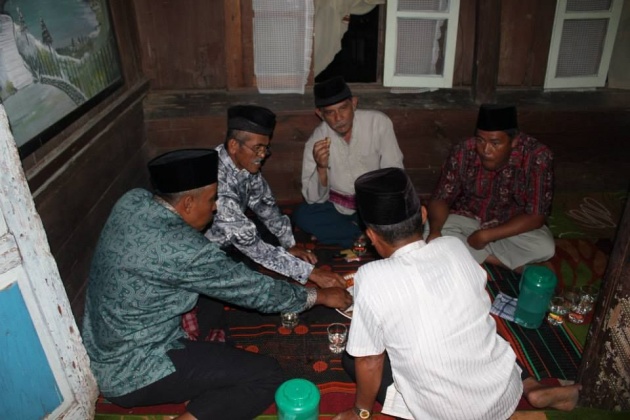 Title as a sign of honor and maturity are carried by the groom which is usually published directly by Ninik Mamak (man from the family). Something very typical about Minangkabau tradition is that every man who has been considered an adult should have a title. Adult term of a man determined if he had been married. Thus, for every youth in Minangkabau, on the day of his marriage he had given the title by his people. 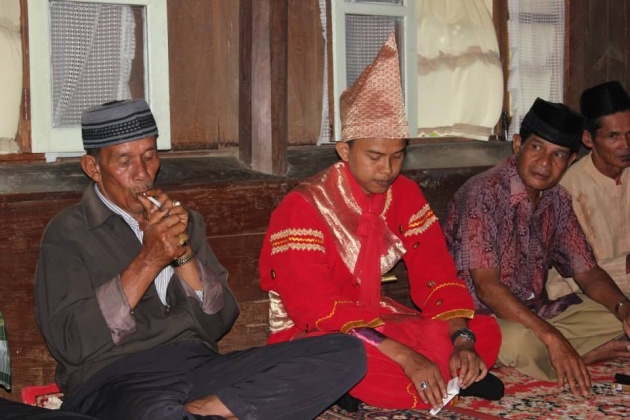 The bride and groom are seated facing each other and both their faces are separated by a fan, then, the fan will be lowered slowly. After that the bride's forehead would be touching. The philosophy: They already legally become "Muhrim" so the skin contiguity between them no longer undo their "wudu'" (the process before prayer).

This procession hinted cooperative relationship between husband and wife who must always exercise restraint and complement each other. This ritual begins with the bride and groom are attempt to take the chicken meat which is hidden in the yellow rice. Chicken body parts were taken marks the respective roles in the household. Chicken head means dominant in marriage. Chicken breasts means tolerant and patient. Thigh and wing means being a protector for families and children.

Coki is a traditional game of Minangkabau, which is a kind of chess game performed by two people, resembling checkers game board. This game means that the bride and groom should be mutually soften their stiffness and ego in order to spawn the intimacy.

For some people, this traditional procession may be quite laborious and time consuming, but as a civilized society, I think it would not hurt us to lead this procession in an attempt to preserve the culture.