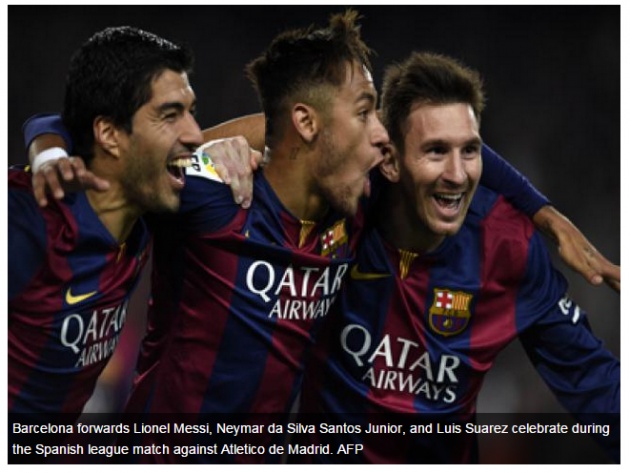 Lionel Messi, Neymar and Luis Suarez were all on target as Barcelona eased talk of a club crisis with a 3-1 win over La Liga champions Atletico Madrid on Sunday.

Messi shrugged off speculation surrounding his future at the Camp Nou to cross for Neymar to scramble home the opener and then tee up Suarez to register just his second La Liga goal.

The Argentine also handed Atletico a route back into the game, though, when he was adjudged to have brought down Jesus Gamez inside the area on the hour mark and Mario Mandzukic slammed home from the penalty spot.

However, Messi made amends by sealing the three points when he slotted home from close range three minutes from time to move Barca back to within a point of Real Madrid at the top of La Liga.

Atletico are now four points adrift of Real, who also have a game in hand over both their title rivals.

Barcelona had failed to beat Atletico in six meetings last season and wouldn't have been looking forward to facing Simeone's men after an unsettling week at the Camp Nou.

A 1-0 defeat to Real Sociedad last weekend was followed by sporting director Andoni Zubizarreta's sacking and the club's under fire president Josep Maria Bartomeu calling club elections for the end of the season.

Meanwhile, reports suggested defeat could have cost Barca boss Luis Enrique his job with relations between him and Messi at breaking point after the Argentine missed training on Monday.

And Enrique acknowledged that he will only silence his critics by continuing to put a winning team out on the field.

"Victories are the only thing that can calm the situation," he said.

"I need to transmit the best idea of how to play football to my players and be as competitive as possible. If we are capable of winning titles or not will be the judge of my era."

"In the second-half we were competitive. It was much closer to what we normally are in the second. We scored and could have got an equaliser, but in the end the third goal finishes the game."

In the end Messi did his talking on the pitch as Barca's star-studded South American frontline guided them to victory.

Barca went in front on 12 minutes when the four-time World Player of the Year danced past Gamez and pulled the ball across goal. Suarez failed to make a proper contact, but Neymar was on hand to sweep home his 17th goal of the season.

Atletico 'keeper Miguel Angel Moya then kept his side in the game with a fine double save to firstly parry Jordi Alba's fierce drive and then block Suarez's effort on the rebound.

The visitors were on the ropes in the first 45 minutes and teenage centre-back Jose Maria Gimenez was lucky to escape unpunished when he flew in dangerously on Neymar to leave the Brazilian with a bloodied ankle.

Neymar missed a guilt-edged chance to double Barca's advantage midway through the half when he headed wide with the goal at his mercy after brilliant play by Messi and Suarez.

However, when the second goal did come, Atletico had a right to feel hard done by as Messi appeared to use his hand to speed past Gamez before sliding the ball through for Suarez to slot home.

Referee Alberto Undiano Mallenco balanced up that perceived injustice on the hour mark, though, as he pointed to the spot when Gamez went down under a challenge from Messi.

It was the first time that Messi had ever conceded a spot-kick in La Liga and Mandzukic didn't pardon him as he slammed high into the roof of the net.

Fernando Torres was introduced by Simeone as Atletico searched for an equaliser and he was only denied a ninth goal in 12 games against Barca by Claudio Bravo's quick-thinking as the Chilean 'keeper rushed from his line to intercept Mandzukic's dangerous low cross.

But in a week where he has dominated the headlines, Messi rounded off his fine performance with a first goal against Atletico in eight games when he pounced on a loose ball inside the area to side-foot home.