What do you usually do when you are at the beach?

Of course swim, silly me! But this is a question which excludes swimming as an answer. It's already summer and so most of us I suppose are thinking of getting wet in the clear blue waters of some famous beach resorts. I had to only reminisce some of the summer escapades which I had done some time ago so I can also feel the hot sun on a summer day or maybe two since I want it to be a vacation. 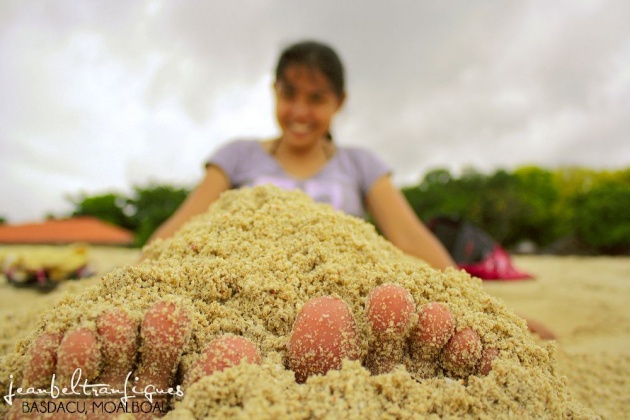 Here's a treat I want to share to you guys. In the North Western part of Cebu, there's a specific town which is famous of its wonderful coral life, the town's name is Moalboal and its famous beach area which is a public one is called Basdacu. The term is a bisayan word for big sands but its a bit ironic because the sands were not at all big ones, they are in fact fine creamy ones. 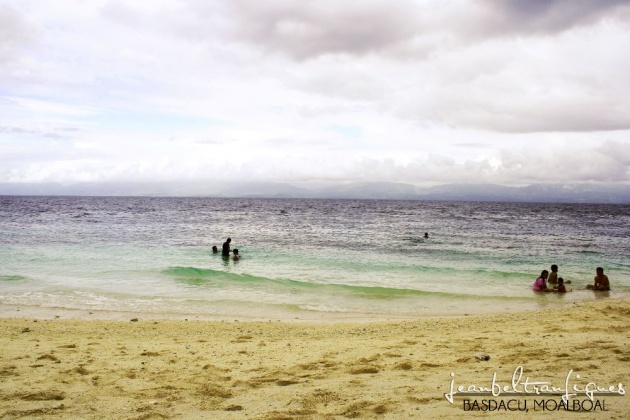 Thanks to our super friend who is a local there, we were invited over when they had celebrated their town's annual fiesta. We arrived evening time so we agreed to visit the beach early morning and try to watch the sunrise. It was the original plan but unfortunately, we have change of plans because of the late birds. So got there still early though, here are the birds trying to fly out and swim in the sea.

Just a distant away and we already have a glimpse of the seashore, the skies were a bit dark though and it rained lightly that morning but we were fine with it, we just need the beach! The white sand welcomed us as well as those ones who had spent the night, there were tents in the shore too! Here are some beach lovers playing along the long shoreline! 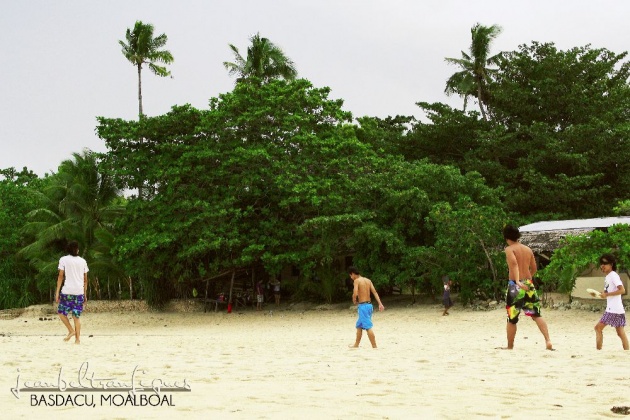 Since the sea was a bit harsh because of the wind and the cloudy gloomy day so we had to enjoy the shore and the sand first, it was still early as well though. Now the funniest thing we had done so far while in the area was to bury ourselves. Let me show you some photos: 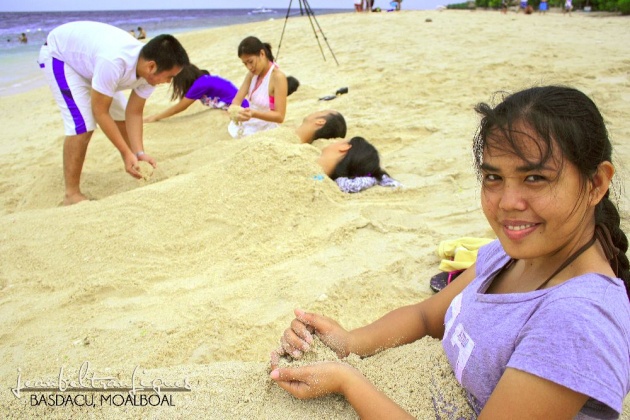 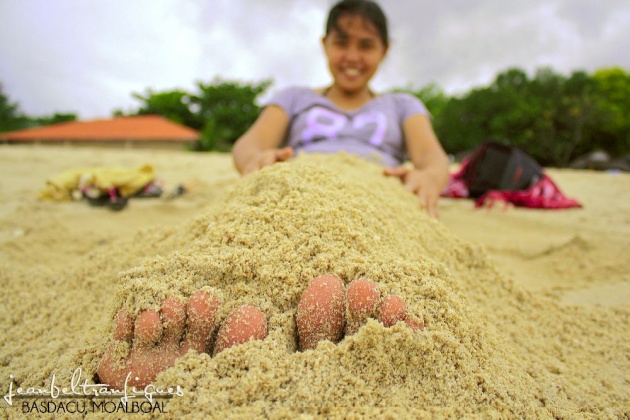 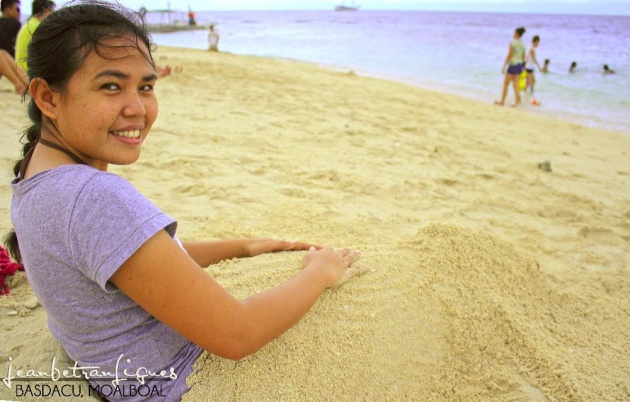 Burying myself under the beach sand has been a tradition each time we are at a beach, it always reminds me of my younger brother who had this kind of health case before where in he can barely walk, he was still two years old back then and one of the things which my parents had been doing for him was bury half of his body under the sand every early morning for a few months. That had somehow helped and my parents had been considering it as a healing act which is why we would always do the same when in a beach. It has made wonders for my brother and I believe or we rather believe that it does do something good. 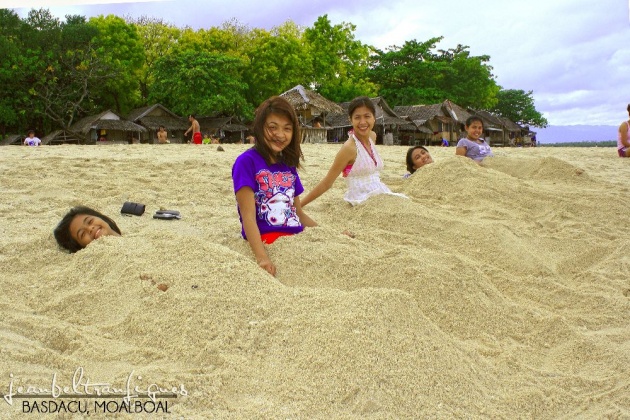 So there you go, the girls had really fun burying ourselves while the boys had fun helping us out there. It became warmer as the time passed by so we had to take a little underwater tour. It is always a fun snorkeling, exploring the underwater. I always believe that the ocean is a magnificent paradise which only a few had experienced. I would love to dive in to a great ocean someday, one of the things in my checklist. So far I had enjoyed just the shallow water snorkeling, how much more if I will be swimming with those fishes down in the deep? 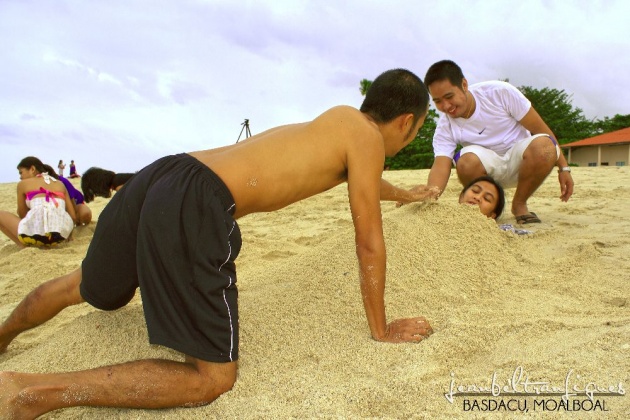 Apart from enjoying both the sand and the under waters, we also had a delight over sea urchins. This elder had been selling these sea urchins for 100 pesos per container. At first, I thought it was too many but after she scraped the inside of it, it was not even close to filling a plate!

This is how it looks from the outside:

While this is the inside of it:

I couldn't remember how it tasted, I only remember eating a spoon of it and that's all, I didn't like the taste though but my friends did. I was okay without it but I am pretty sure at our local town in Bohol, these are being sold per bottle, fishermen or anyone who is good at swimming hunts for these sea urchins and sell it per bottle. But I guess I would prefer eating it fresh like these as they had just harvested the urchins a few minutes ago.

Now you have some idea on what to do on your summer vacation trips. Get your body buried ASAP! 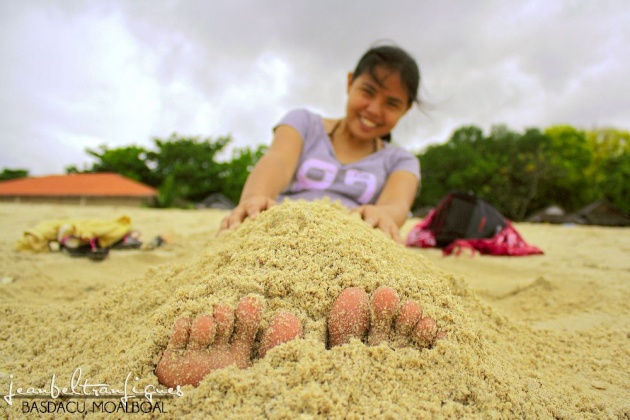