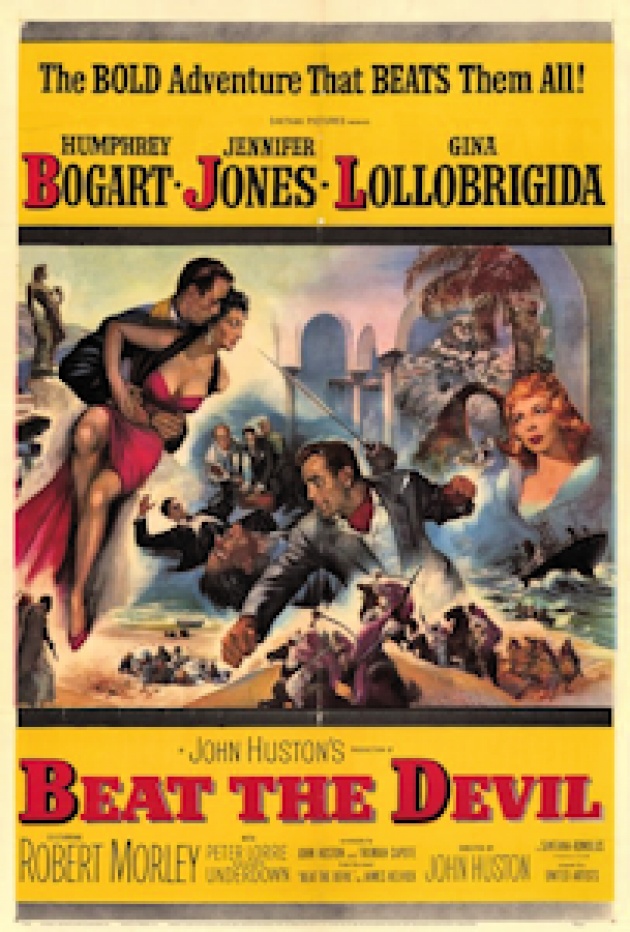 “Beat The Devil” (1953, John Huston) This is a film that has slipped through the cracks for way too long. Beat The Devil has an unparalleled veteran cast and crew including, but not limited to, Humphrey Bogart, Gina Lollobrigida, Robert Morley, Peter Lorre, Jennifer Jones, co-writer, co-producer, director John Huston as well as a seasoned crew/staff with many oscar nominations and a few wins between. Although the film was not liked by some who made it, notably Humphrey Bogart who claimed anyone who liked it was "a phony." Perhaps he was bitter that he partially bankrolled this commercial and initial critical bomb. Beat The Devil survives as a testament for what a great writing team (Huston and Truman Capote), great crew and a great cast can create. It’s as if the lines were born for this cast of actors and actresses to play. It reminds me of Sir Carol Reed’s The Third Man in its in- film atmosphere. However, I do think people have been a bit fonder of the other film if availability of quality is any indication. The current available print is bad. And it is so worth cleaning up and re-issuing on some grander format with notes, etc. 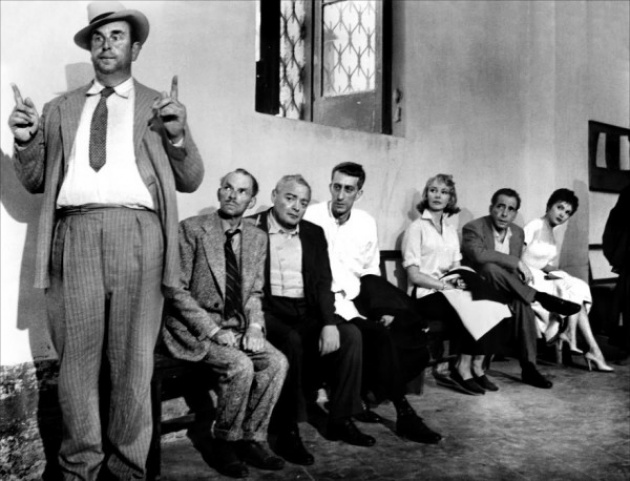 The world of Beat The Devil is one of deceipt. Everyone can lie and everyone does. The characters are set up to be divided into the shady and the innocent bystanders. They all turn out to be crooks. They are all ruthless but the appearances of Gina Lollobrigida, Humphrey Bogart and Peter Lorre in particular are characters and actors and an actress that we can’t help but ‘like,’ perhaps in a move of sympathy or pity on Lorre’s part (as usual). The story is of a group of four international men and Humphrey Bogart are waiting in a small Italian coastal town awaiting a boat to Africa to claim some land with uranium and take it to the bank.. The story revolves around them and arriving at their goal. Accompanying them are a British couple also on their way to Africa. Humphrey Bogart, Peter Lorre and Robert Morley in a Sydney Greenstreet-ish turn are so awesome together. They (that is HB, PL and Greenstreet) had an obvious history of Casablanca behind them but a long and productive on-film/off-film career together as well. A trio that was truly made to act together. Beat The Devil contains some priceless witticisms bestowed upon a couple of the quartet of criminals by Billy (HB). In one scene, Billy is talking with Mr. Peterson (Morley) at a bar and points to the short man in back of him over his back and refers to him without looking as a “knife-happy little junky” (played by Ivor Bernard in his last acting role). In another scene, after wisecracking about Lorre’s character’s name being O’Hara, he defends himself by retorting that, “In Chile, O’Hara is a name of honor. Many Germans in Chile are named O’Hara.” And last but not least, to be remembered as more than sheer witticism, Billy in a wordy response includes, “my expectations keep me afloat.”

Film Annex is built upon the ethos of allowing films and their creators a shot at a larger audience. I haven't just picked any old film to be on Baxter Martin WebTV and this is one the films I am most proud to have included on the site for the audience of Film Annex. Beat The Devil may not be as good as some other Bogart, Huston films but it surely is worth the viewing as it is worth the appreciation shown it. There are some truly brilliant moments with just as much sly wit as you'd hear in any top notch noir films. It's worth noting that John Huston, who kicked off the film noir period with The Maltese Falcon in 1941 intended Beat The Devil as a parody of the quasi genre he helped to create cinematically. Pretend you’re watching it on a vhs tape you just found in your closet! Click on the Beat The Devil link at the top to watch it now!

Pictured: Alexander (Fritz Karl) turns his back on conformity in 'Life Guidance', an alternate-reali…

The Man Who Knew Too Much

Bob and Jill Lawrence are on a winter sports vacation with their daughter Betty. Their friend Louis …