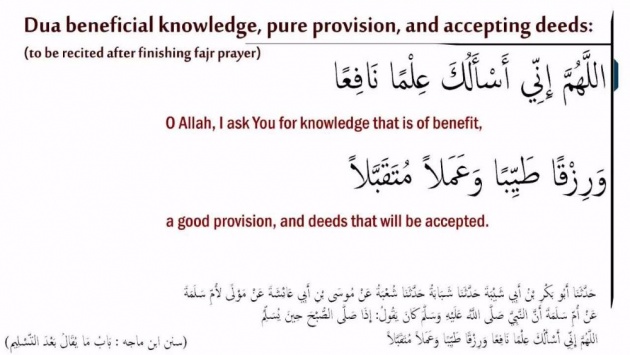 Everything has its indications and signs. Indications that knowledge is beneficial are that it leads to fine character, good manners and praiseworthy attributes. In this regard it was said: "He whose knowledge doesn’t cause him to weep, can be justifiably considered not to have been granted beneficial knowledge", since Allah described the people of knowledge saying:

Thus knowledge carries its possessor towards humility, prostration, crying, calling oneself to account and truthfulness with Allah.

Indeed crying is the clearest sign and best proof of the knowledge one possesses and of a person’s truthfulness. What is the benefit of knowledge a person learns, if it doesn’t lead him to crying, humbleness, penitence and good dealings with the people?

Is not the possessor of knowledge one who knows most about his Lord? Has he not read about His Exalted, Perfect, Lofty Attributes that which causes his heart to humble and his eyes to shed tears? Has he not read in the Book of Allah and in the sayings of the Messenger of Allah, sallallahu 'alayhi wa sallam, texts pertaining to the Fire, the terror in the grave and the fearful accounts of the Resurrection because of which mountains are humbled out of the fear of Allah?

So compare your position to this – may Allah have mercy upon us – and don’t forget the virtuous saying, "He who’s knowledge doesn’t cause him to weep, can be justifiably considered not to have been granted beneficial knowledge."