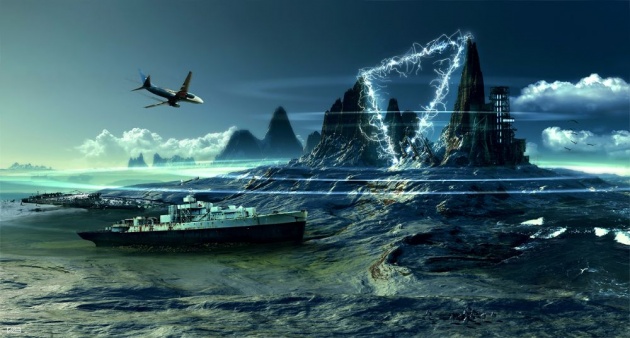 Bermuda Triangle is a strange and one of the most mysterious area of the world. Shape of this area is triangle and it is situated in Western part of North Atlantic Ocean. North Atlantic Ocean is bounded by Miami (Florida) & San Juan (Puerto Rico). Through different mysteries incidents hundreds of people, dozens of planes and ships have mysteriously disappeared over the past five centuries in this triangle area. Because of these mysterious incidents it is also known as Devil’s Triangle.

According to research of US Navy, they claimed that “Triangle” does not exist there. But other scientists and researchers claimed that “Triangle” exists there. According to their research “Bermuda Triangle” covers quite a large area of 5000,000 miles to 1.5 million square miles of sea. In fact, it is not small at all. The area is approximately half the size of Australia (2.97 million square miles).” 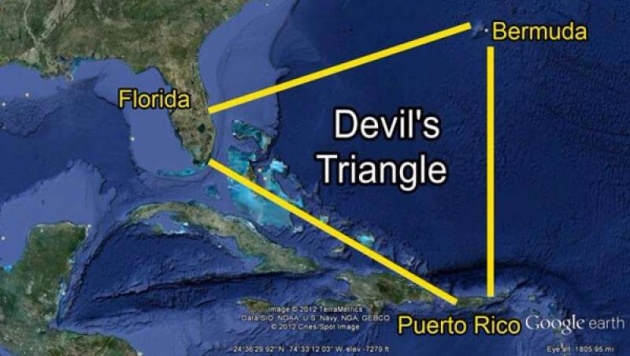 Suppose when you enter the area of Bermuda Triangle then what will be happen? Mmmm sounds really interesting and mysterious. :P

So for a lay man there must these types of questions raised in mind:

Where is Bermuda Triangle?

Why is it such a mysterious place?

What are the reasons behind it?

Through different mysterious stories Bermuda triangle has become a very mysterious area on the Atlantic Ocean. On an average, four planes and twenty sailboats disappear every year. And after missing, they also don’t find any evidence of disappearance of them. So, people believe that devils lives there and that’s why strange incidents have taken place there. But in fact no one knows what the exact reason behind it is. Why people, planes, ships is going to miss?? That is the reason so people created different stories and prevailed myths.

It is noticed most of the incidents of disappearances have taken place when plans and ships cross the boundary of the triangle which is between Florida and Puerto Rico. May be this proverb is fit on this place “More mouths will have more talks” :P Lol

The mysterious stories related to the Bermuda Triangle have been documented for centuries and the ill fame of this Triangle area first started with Christopher Columbus. He wrote in his magazines that inside this triangle area, suddenly sailboat’s compass stopped working, not only this he also wrote that he saw a fireball in the sky too. According to him (Christopher Columbus), when he looked down at his compass he noticed that his compass was giving strange and wrong readings. He wrote, but at that time I didn’t take it seriously and even though did not inform my other crew members too. According to Columbus after three days during his travel on the way near to this Triangle, he also spotted a mysterious light. After then he alarmed his crew to go back to Spain. 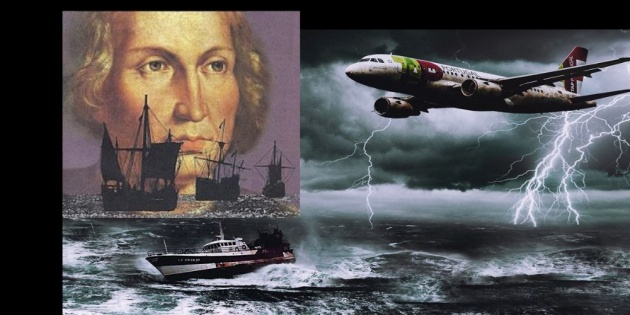 Not only this incident, there are different incidents have taken place. Like disappearance of “Flight 19” which is one of the most famous incident. “Flight 19” was a training flight of five TBM Avengers bombers who left Fort Lauderdale (city in Florida) on a routine mission in 1945. Suddenly fourteen crew members disappeared. Not only this when an aero plane left to rescue them (the Navy bombers) it also disappeared mysteriously as well. It is claimed that during the 20th century, approximately one thousand planes and ships have disappeared in. Same like these there are a lots of stories related to this Triangle area but still it is a mystery. Scientists and researchers also have presented a lots of theories but some researchers, scientists and philosophers are still not satisfy with these theories.

Scientists and researchers have used a number of supernatural theories to solve the mystery of Bermuda Triangle. These are the following:

According to some scientists and researchers that a comet, of unknown composition, crashed to Earth more than 11,000 years ago. And this comet embedded in the area of Bermuda Triangle (beneath the ocean floor), and according to them comet may emit electromagnetic properties.

According to researchers and scientists that AUTEC (United States Navy’s Atlantic Undersea Test and Evaluation Center) is situated in this Bermuda Triangle, and they used this place for to test their weapons, submarines, sonars and secret projects. According to them the Government wanted to keep all this secret from general public, so this can be the prime reason behind of mysterious disappearances. 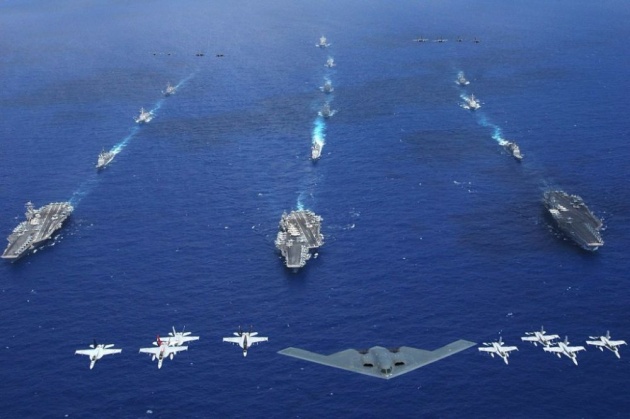 Suddenly incidents of disappearance of ships are often backed up by folklores of pirates. According to researchers may be ships and boats are being hijacked by pirates for smuggling operations.

In 1998 Doctor Ben Clennell of Leeds University, England presented the methane gas theory. According to Dr. Ben Clennell that due to landslides under the water floors of oceans are releasing large amount of methane gas. And because of these landslides, under the surface of earth, which leads to very low water density and because of this ships and boats get sink. According to other researchers methane gas heats up the water which causes ships and boats to sink due to less float ability. And in the case of airplanes methane gas saturated air atmosphere to get stormy which causes airplanes also crash. 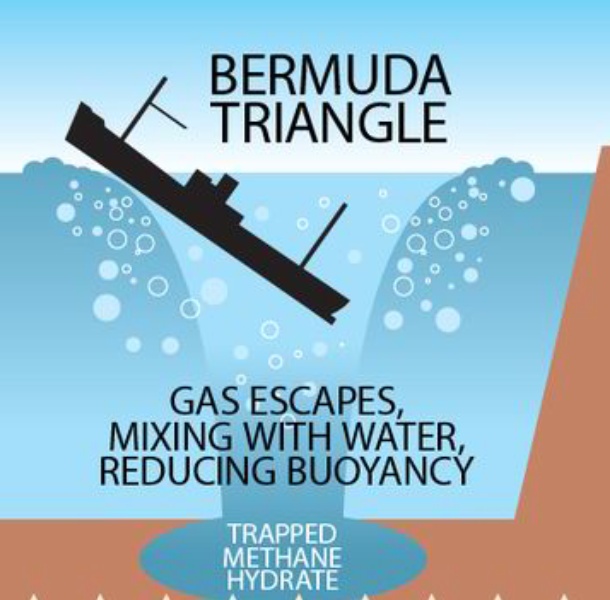 According to Muslim Scholar Theory (Bermuda Triangle and Dajjal):

"The word of "Dajjal" is basically an Arabic word which means Liar or Deceiver. Muslims believe that when Day of Judgement will be near, dajjal will appear. He (Dajjal) will travel the whole world and preach with his false hood to the people. People with weak beliefs become his followers. Actually God created Dajjal to test people beliefs."

One of the Muslim religious scholar also acknowledged the disappearance of vessels and ships. He also states that there is unknown force behind these incidents. According to him he also validates the saying of Prophet Mohammad P.B.U.H that in Bermuda, there is throne of Iblees (the king of satans or devil) due to that reason these events occurring there. According to the study of Muslim scholar, Dajjal is chained on unknown island so it validates that fact that Dajjal will not born he will appear after breaking those chains. He also acknowledged the fact that secret forces are also currently working for Dajjal for the accomplishment of his mater plan. He also pointed towards the Dragon sea which is near Philippines and Japan where same strange incidents are also occurring. It is also believed that Dajjal will have special abilities through which he will deceive people and make them his followers. In appearance Dajjal will have mediocre height. curly hair and one eye hanging out like a grape. He will have irregular legs. It is also said that he will travel like a speed of cloud. There are some of the appearance which is described by the Prophet P.B.U.H. Its is also believed that the one who will kill Dajjal will be Jesus Christ. As it is believed that Jesus Christ is alive in heaven and in final battle Jesus Christ will appear on earth. In this battle Dajjal along his army will fight with Jesus Christ and in the end Jesus Christ will be victorious. 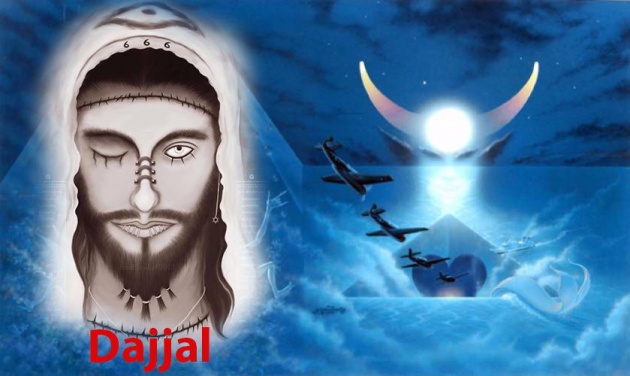 Researchers said human errors could also not be neglected for such mysterious incidents. According to researchers considering yourself as a pilot for a moment. It can be possible that you are in stress during your travel due to some personal issues and lost your concentration from your aero plan or may be you are travelling in the sky enjoying beautiful scene of island waves and slowly the tiredness get to you. At that movement you can fall asleep and suddenly due to the beeps of your plane when you wake up but you can still being half asleep. This can make a big mistake like instead of moving the nose of the plane upward you dive it even further down. During all sudden situations when you realize you have made a big mistake, so it is already too late and you crash your plane into the deep ocean. So it does seem that all the missing planes were caused by human error. 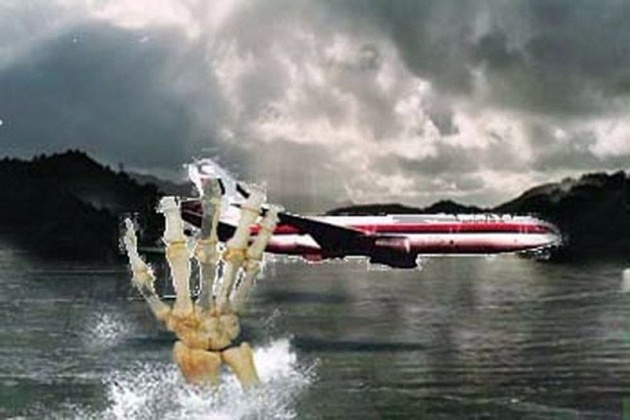 Some of researchers, the mysteriously disappearances are linked to UFO’s and aliens activity. City of Atlantis lost under the triangle and various other mysterious reasons as well. The debris of any plane or ship disappears in the Triangle cannot be found. It is due to Gulf Stream runs near the triangle which will quickly get rid of the debris.

According to researchers Bermuda Triangle is one of the rarest places on earth where compass does not point towards Magnetic North but points towards true north. This creates confusion and caused so many ships and planes lost its course in the triangle.

This theory is known as one of the best theory of Bermuda Triangle, Electronic Fog which sticks to ship or plane like a massive cotton ball. According to scientists due to the influence of electronic fog, electronic devices and other instruments of ship and plane start malfunctioning, and which leads to sudden disappearance of planes and ships.

According to this theory researchers also cannot ignore the violent weather of this area. In Bermuda Triangle lots of storms are raised very often and very quickly. As intensity of these storms are so severe, and these storms are also so quick that even a satellite does not predict such storms as well. Then no doubt, if a ship or even a plane is moving through that area, so there is always a chance to sink. 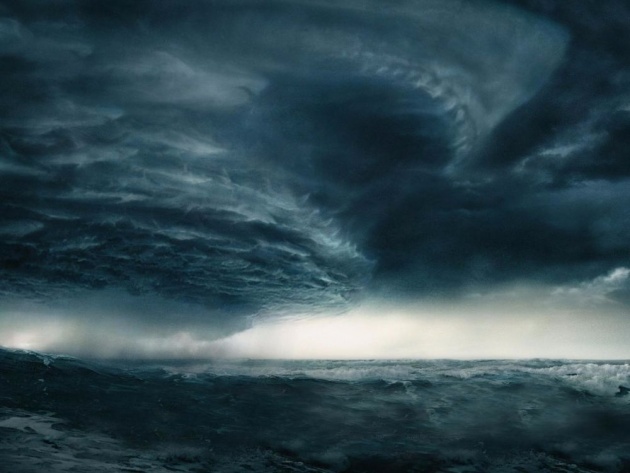 As these are the famous theories which are presented by researchers, scientists. Some of the theories are more scientific, while others are more paranormal. But still some of researchers & scientists not satisfy of these theories. According to them actually no one really know the reason for the strange incidents happening in the Bermuda triangle, and may be these theories are nothing more than our best guesses. So you can say mystery of Bermuda Triangle is still unsolved.

According to Team Alvimedica’s Amory Ross:

“I think we all find the Bermuda Triangle to be fascinatingly entertaining and nothing more,”

“Maybe there is a magnetic variation in this part of the world that plays with a simple compass, but no doubt science can explain it along with any of the outrageous Bermuda Triangle. Planes crash, boats go missing, and UFO reports pour in all over the world.

“There is nothing special about the Bermuda Triangle except the size of the stories it inspires. Myth: busted!”

Thanks for sparing time in reading My 26th attempt for my virtual home "BitLanders".... Stay Connected for more articles.....  ツ