Beyond “Beasts”: The Art of Court 13 at Contemporary Arts Center New Orleans - Beasts of the Southern Wild

I took a 4-day trip to New Orleans last week to attend the opening of Beyond “Beasts”: The Art of Court 13 at the city's Contemporary Art Center. My cab driver was kind enough to pretend to be my tour guide for 20 minutes as we drove from the airport to the museum. I knew nothing about New Orleans and didn't know what to expect. At the end of the trip, I found myself not wanting to leave. It's definitely one of the most magical places I've ever been to, a place that exists in its own reality, where people seem relaxed, cheerful, and sincere. At least, that was my first impression. I'll have to go back to find out more.

When I got to the museum late Thursday, the artists who were involved in the exhibition were prepping for the following evening's opening. The show, which is running through June 16th, features the work of Court 13, the film collective behind the Oscar-nominated film Beasts of the Southern Wild. The walls of the space were covered with still photographs from the movie as well as references that inspired the story. There was still a bit of cutting, building, hanging, and painting going on, but there was no doubt all preparations would be finished by the next day. 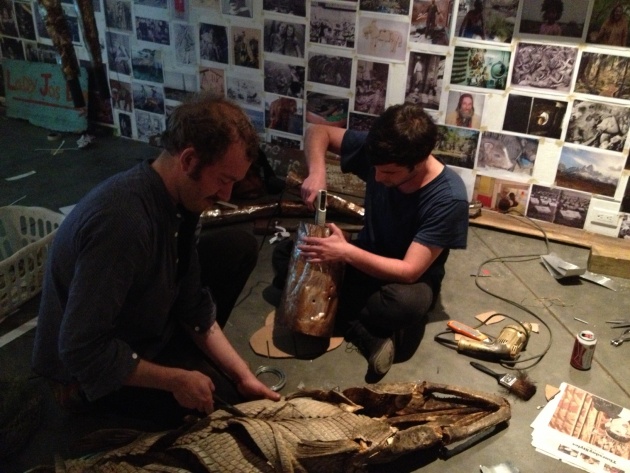 At the show, original artworks and installation pieces allowed viewers to go behind the scenes to see the props, models, animals, and sculptures used in the movie. Hand-painted wooden signs, animal posts, Auroch costumes and head-pieces that were worn by pigs, and The Turk, Wink’s famous truck boat, were all beautifully displayed. The exhibition was testament to the talent and passion of all the artists who worked on the film as it re-created the mystical aura ever-present in Beasts of the Southern Wild. 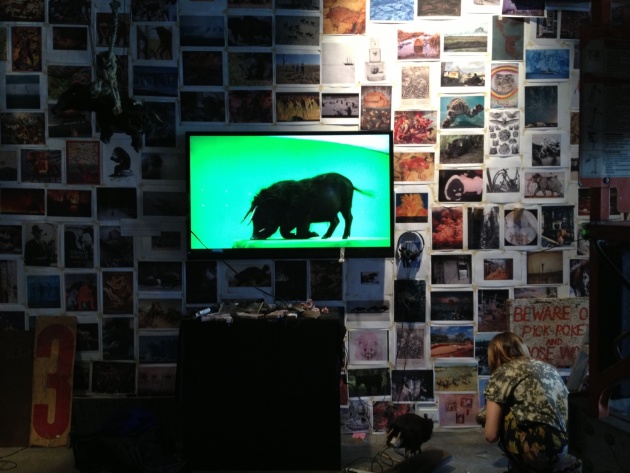 Multiple LCD screens were placed throughout the room, displaying making-of videos, interviews, and audition tapes. Every aspect of the movie's creation was there for the visitors to see. It was exciting to watch how actors were directed, scenes were shot, and sets were built. In the age where online video is so prevalent, it was refreshing to have all this material inside of a beautiful building.

The show also featured Court 13's early films and materials relating directly to their creation. Ray Tintori's Sundance Film Festival winning short film Death to the Tinman (2007) was screened right next to the Tinman costume hanging from the ceiling (Tintori re-built the costume specifically for the show). 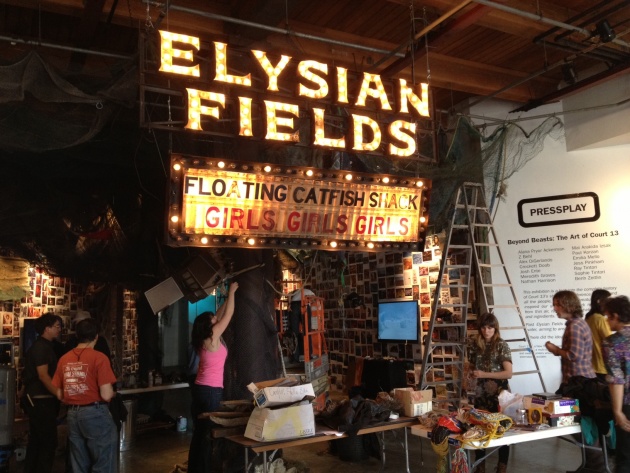 Interviews with the film's producers and special effects artists are soon to appear on Film Annex. In the meantime, if you're near New Orleans, go see this amazing exhibition! If you're not near New Orleans, still go see it as it's worth the 3-hour plane ride.