Beyond Snapped-Answers2 Murders by US Soldier? 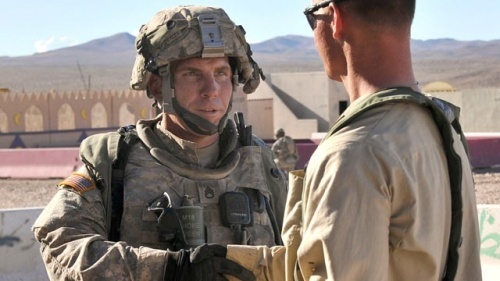 After the initial shock of anyone, but especially a US soldier murdering 16 innocent Afghanistan civilians (9 of them toddlers), like probably most I wanted to understand why. Immediately information began to leak of marital problems, drunken night, brain injury and badly wounded comrade. Almost immediately the picture of a rogue soldier, one who "snapped" began to emerge, but at least some of the underlying story was spin rather than reality. For example, the family of the alleged US soldier killer and neighbors rejected any claim of marital problems or alcohol abuse. "Snapped"? Keeping the name of the alleged shooter Staff Sgt. Robert Bales secret for most of the week, beyond that necessary to secure family from potential reprisal was suspicious from outset. What is being hidden or is it more likely an effort to imprint the authoritative narrative of soldier snapped and gone mad naked of logic or ideology/theology. There were also some fundamental contradictions, particularly that he apparently demanded private lawyer while opting to remain silent - he was deliberate in his actions and choices during and after the killings. Premeditation seems to be evident, and he actually may have hoped to get away with it and return to his normal life. Snapped did not seem to fit, even if it best fit the explanation that official sources would have you and I believe. Snapped still might be part of the explanation, but I'm suspicious of packaged conclusions while deprived of opportunity to examine ingredients myself, and purposefully through a prolonged delay of releasing the identity of the alleged shooter. A Soldier Who Took Pride in Distinguish Between Enemy & non-Combatants? The following description of Bales just released through ABC News is one of few sources of more authentic evidence. It does not answer the question why, but to the contrary. It is though an important contribution to overtime help us understand what happened to a soldier who immediately enlisted after the 9/11 terror attacks: "Bales' alleged murderous rage is in stark contrast to what he said after a fierce battle in Zarqa, Iraq, in 2007: 'I've never been more proud to be a part of this unit than that day for the simple fact that we discriminated between the bad guys and the noncombatants and then afterward we ended up helping the people that three or four hours before were trying to kill us," he told Fort Lewis' Northwest Guardian. I think that's the real difference between being an American as opposed to being a bad guy, someone who puts his family in harm's way like that,' Bales said at the time."(ABC News -March 17, 2012) Soldiers Who Seek Humanity in The Other & Their Future through Duty & Service: "Snapped" also has a negative side, perhaps more with respect to the individuals who have fought and served more than the institution. Speaking of the courage and sacrifice of the men/women who have served the United States in uniform seems almost perfunctory. A welcome home back parade would be nice, but a job or entrepreneurial opportunity is even better. Most US veterans do not want to tell stories of what happened so much as about the new chapters they look forward writing regarding their and their families lives. As one veteran recently wrote: veterans may be rhetorically praised but heroic Rambo or soldier "snapped" are both images to be overcome. "Snapped" is not a good reflection of the possibility for the millions of veterans - many who suffered through marital problems and physical/psychological trauma - who are now seeking the way beyond. They did not just snap even if many also had doubts about their mission, the Afghan people or both. (Film Annex's Francesco Rulli has reached out to provide perhaps an impetus/opportunity for veterans seeking the way beyond to their lives - G.I.V.E. see www.filmannex.com/webtv/give). It is understandable why there may be a tendency to "spin" this type of news/story, presumably in the interest of a higher objective - the US Mission in Afghanistan. However, this higher objective misses three others: The story of US soldiers "snapping" undermines the image/life of soldier abroad and Veteran at home. Minimalism is not a good approach toward either justice or the people/country you are presumably trying to help. Finally, I do not believe the spin, and it makes me even more skeptical now as to the facts of this case and in the future as to the same sources. Truth may surprise all of us for different reasons and based upon preconceptions/stereotypes we may have/been forming, but it has its immense value to both mission and our shared humanity. Events from today's Syria to recent events in Rwanda and Bosnia, are indicative of a dark side that is shared across cultures, ethnicity and religions. Read our Latest Blog for Video: "Afghanistan-It's Their Country" - diplomaticallyincorrect.org/films/blog_post/afghanistan-its-their-country/47289 More Video for Blogs at www.diplomaticallyincorrect.org including – “How Freedom Wins Free-Market Place of Ideas (Bosnia Precedent for Afghanistan)” - diplomaticallyincorrect.org/films/blog_post/how-freedom-wins-free-market-place-of-ideas/45229 By Ambassador Muhamed Sacirbey – Follow @MuhamedSacirbey Facebook = Become a Fan at “Diplomatically Incorrect” Twitter – Follow us at DiplomaticallyX