Bitumen
Bitumen is a non-crystalline solid or viscous material derived from petroleum, by natural or refinery process.
Bitumen is brown or black in color.
The main constituents of bitumen are:
Petrolene: a yellowish oily substance, an excess of which makes bitumen to melt at low temperature, and
Asphaltene: hard black substance, and excess of which makes bitumen brittle and non-plastic.
Bitumen is not affected by light, air or water individually, but in combination they can make it brittle, porous and susceptible to oxidation forming blisters and cracks.
It becomes soft at temperatures between 30 – 100 oC (no sharp melting point).

Bituminous materials
The term ‘bituminous materials’ is generally taken to include all materials consisting of aggregate bound with either bitumen or tar.
Materials of this kind are used almost exclusively in road construction. However, bitumen and tar on their own have other uses in construction.
For example, bitumen is used in roofing materials and as a protective/waterproof coating.
The use of tar in road building materials began in early 20th century after advent of motor vehicle.
At that time, Macadam waterbound roads were constructed . Motor vehicles generated dust on macadam roads, which led to the use of tar as a dressing to bind the surface.
A very wide range of bituminous mixtures have evolved to suit the wide variety of circumstances in which they are used.
Bituminous materials are used in ‘flexible’ construction. The alternative is ‘rigid’ construction where the road consists essentially of a concrete slab.
In flexible construction there are a number of layers to the road structure.
Bituminous materials may be used in wearing and base course.
However, wearing course asphalt differs from a basecourse asphalt.
Constituents of bituminous materials
Bituminous materials consist of a graded aggregate bound together with bitumen.
Thus, they are two-phase materials and their properties depend upon the properties of individual phases as well as the mix proportions.
Aggregate is stiff and hard, whereas the bitumen is flexible and soft and is particularly susceptible to temperature change.
Bitumen resources
(a) Natural bitumen, (b) Refinery bitumen
Natural bitumen
Bitumen occurs naturally, formed from petroleum by geological forces and always in intimate association with mineral aggregates.
Types of deposit range from almost pure bitumen to bitumen-impregnated rocks and bituminous sands with only a few percent bitumen.
Rock asphalt contains of porous CaCo3 or silica stone impregnated with bitumen with typical bitumen content of 10%.
Lake asphalt consists of a bitumen ‘lake’ with finely divided mineral matter dispersed throughout the bitumen.
Refinery bitumen
Bitumen is the residual material left after the fractional distillation of crude oil.
Crudes vary in their bitumen content.
The lighter paraffinic crudes (Middle East & North Sea) have a low bitumen content.
Heavier crudes (known as asphaltic crudes), such as those from US, contain more bitumen with is more easily extracted.
Manufacture of refinery bitumen
The process of refining crude oil yields a range of products, as shown in Fig. below.
These products are released at different temperatures.
Bitumen is the residual material.

Types of bitumen – penetration grades
Refinery bitumen are produced with a range of viscosities and are known as penetration grade bitumens.
The term derives from the test which is used to characterize them according to hardness.
The range of penetration grades for road bitumens is from 15 to 450, although the most commonly use are in rang 50 to 200.

Oxidized bitumen
Refinery bitumen may be further processed by air blowing.
This consists of introducing air under pressure into a soft bitumen under controlled temperature conditions.
The oxygen in the air reacts with certain compounds in the bitumen resulting in the formation of compounds of higher molecular weight.
Use: roofing and pipe coating.
Road bitumen known as heavy duty (HD) bitumen is also produced by this process.
Cutbacks
At ambient temperature bitumen can be more or less solid and to enable it to be used for road construction, it must be temporarily changed into a fluid state. It is achieved by raising temperature.
However, for surface dressing and some type of bituminous mixtures, it is necessary to have a fluid binder that can be applied and mixed at low temperatures, but have adequate hardness after laying.
Cutback bitumens are penetration grade bitumen which have their viscosity temporarily reduced by dilation in a volatile oil.
After application, volatile oil evaporates and bitumen reverts to its former viscosity.
Properties of bitumen
Viscosity
Viscosity depends greatly on temperature.
At low temperature, bitumen has great viscosity and acquire the properties of a solid body. With increase in temperature the viscosity of bitumen decreases and it passes into liquid state.
Ductility
Ductility depends upon temperature, group composition and nature of structure.
Viscous bitumens containing solid paraffins at low temperature are very ductile.
Softening point
Softening point is  Re silieelated to viscosity. Bitumen needs sufficient fluidity before specific
Bitumen is resilient, non-rigid.
It is capable of absorbing shocks and accommodate itself to the movement in structure due to temperature, settlement or shrinkage.
Uses of bitumen
Flexible pavement construction.
It is used in damp-proof course in walls, under basements and in lining tanks, swimming pools, etc.
It is used for filling up the joints in leaky roofs.
It is used for making heat insulating materials for buildings.

Tar
It is a black viscous liquid produced by destructive distillation of organic materials such as coal, peat, wood, or oil.
Uses
It is used for roofing and road making.
It is used for making bituminous paints and water-proofing compounds.
Coal tar is used as a preservative for timber.
Coal tar
It is obtained, as a byproduct in the destructive distillation of coal, or in the manufacture of coal gas.
It is heavy, strong smelling and black.
It has high specific gravity and viscosity, and good adhesive properties.
Wood tar
It is obtained by destructive distillation of resinous wood (pine etc.)
Mineral tar
It is produced by distillation of bituminous shales.
Asphalt
Asphalt is defined as natural or mechanical mixture in which bitumen is associated with inert mineral matter.
It is solid or semi-solid sticky product, formed by partial evaporation or distillation of certain petroleum oils.
Properties of asphalt
It is sticky or adhesive and binds strongly as cement.
It is water-proof.
It is durable and retains its properties for several years.
It is elastic.
It becomes plastic and workable when heated.
If is not seriously affected by adverse weather.
It is ductile and can be stretched without breaking.
Uses of asphalt
It is used as damp-proof-course (DPC) for preventing dampness in walls, floors and roof of buildings.
It is used as water repellent layer over flat-roofs, arches and basements.
It is used for lining walls of tanks, swimming pools and in other such places.
It is used for preparing paints and roofing felts.
It is the form of asphalt mortar and asphalt concrete which is extensively used for paving roads in different ways such as surface dressing, grouted macadam, coated macadam, etc.
It is used for flooring purposes
Types of asphalt
Natural asphalt
Lake asphalt: it is obtained from lakes of Trinidad and Bermudez (South America) at depths varying from 3 to 60 m. it is a composite mineral containing about 40 to 70 % of pure bitumen.
Rock asphalt: It is natural asphalt impregnated in limestone rocks found in some parts of Switzerland, France, and Germany. It contains about 4 to 20 % pure bitumen by volume, the rest consists of calcareous materials
Petroleum asphalt
It is also known artificial asphalt. It is obtained by fractional distillation of crude petroleum oils.
Cut-back asphalt
It is a liquid asphalt and is prepared by dissolving asphalt in a volatile solvent. It can be applied at normal temperature in cold condition.
Uses: used for preparing bituminous paints, for repairing roofs.
Mastic asphalt
it is manufactured by adding pulverized natural rock gradually to molten refined bitumen, agitating the mixture for about 5 hours (200-250 oC) and placing it into moulds for cooling.
The mass consolidates into hard elastic blocks which can be re-melted when used for pavements.
It is tough, durable, nonabsorbent, damp proof, and noiseless
Asphaltic cement
It is prepared by blowing air through melted asphalt at high temperature. The asphalt is oxidised and the resulting product is plastic in nature.
Uses: roofing, flooring, water proofing and in expansion joints in concrete.
Asphaltic emulsion
It is prepared by mixing asphalt with 50 to 60 % water in presence of 1 % of emulsifying agent.
On evaporation of water, the emulsion breaks and it forms a water proofing layer.
Asphalt emulsion does not require a petroleum solvent to make it liquid and in most cases asphalt emulsions can be used. 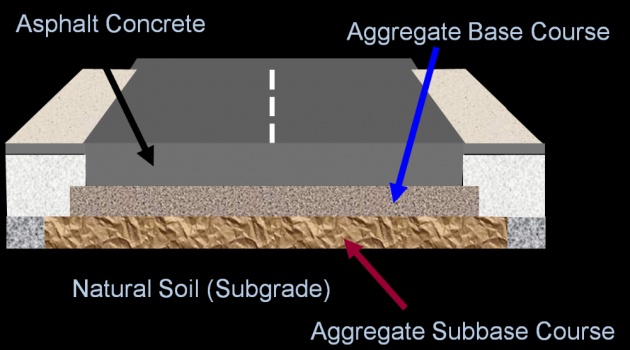 Hi bit-friends! Hope you are doing well today. Earlier this week, I had learned a new type of journa…

Plants are Impotents We all need plants. They play an impotent role in our environment. Al…