Bitlanders - A new way to be social

Social Media "Paying For Your Social Activity", Yes it sounds strange but its an open truth. When I thinks about earning online, it seem to me as difficult as digging a well because online paying websites demands a great part of your time and moreover, pay a very little of your expectations. People waste a lot of their time but they don't even get enough to satisfy themselves. This all discourages their ability to earn online. But Bitlanders is not such these sites and it really pays for your social activities. Moreover, it discourages all kinds of scam, fraud and deciet. What you have to do here is just to be online just for a little while, make some quality post that can attract others. You get rewards when other people like or buzz your posts. Moreover, don't forget to buzz other user's posts which you like because you buzz appreciates them to make more like that!!

First of all I would like to guide the new users who are interested to join the Bitlanders. First, you will have to sign up or register. Afterwords, you will have to create an Avatar which will represent you on this platform because here on Bitlanders, you are not represented by your profile picture rather your avatar work for you as your profile picture so be careful in making your avatar and try to shape him as much close to the reality as possible.
After this, your account or ID will be registered allowing you to use Bitlanders. Bitlanders gives you 15 initial gems in the starting. Moreover you are awarded more gems when write your first blog or upload your first movie. Gems can be used to buy accessories for the outfits of your avatar. In addition these gems can also be used to submit your blogs or videos for review.
Once you will have created your account, you will need to make some posts to earn. You will have to read this whole blog be familiar to this platform!

What is Buzz and Buzz Score:

"Buzz" means "Liking". When someone likes your post, he/she buzz it which results in some increase in your score. Buzz Score is increased by two types of buzz.
• Base Buzz
• Direct Power-ups
Direct Power-Ups:
Direct Power-ups are those which you get in the start of everyday and when you complete the daily quests. These buzz can be seen at the top left corner of the screen if you are using a PC or Laptop and in case of a mobile browser you will find it on the top left corner of the L.C.D. In my opinion,
These power-ups don't play important role. They can be increased in a day and can also be loosed in a single day.
Base Buzz:
All you have to focus is your base buzz because it is what your buzz score depends upon. Base buzz itself depends upon your influence and activity in Bitlanders. The more you post or get buzz the gretaer will be your buzz score!! In fact
Your Buzz Score is directly proportonal to your Base Buzz.

Things to do or not to do on Bitlanders:

There are some rule here on bitlanders which also make it a perfect social site. Things a user should do and thing forbidden here are briefly described in the followin paragraph:

Bitlanders pays its users for certain activities including blog writing, posting videos, pictures and sharing their statuses in the form of microblogs. A little about them is described briefly below:

Movies:
It is an important and one of the most golden opportunity for a user to express their ability and talent that how much better can they handle a camera! Original movies made by the users themselves are really appreciate if submitted for review by the management on this platform. No doubt there are many users who are making and submitting videos for Bitlanders and are also getting a appreciable rewards. I am gonna show some screen shots of best videos makers below:

Microblogs
Microblogs are commonly statuses which a user share with its fellow users. We can also add pictures and quotes in out microblogs to make them more attractive. But Bitlanders has fixed a limit over the length of the microblogs and the users are allowed to write a microblog with a limit of 160 characters. This limit also clears that what you are writing here is a microblog not a blog! Microblogs shows how much summarize can you make your thoughts. Because its an opportunity to share your opinions in a very precise way so try to use less but attractive and impressive words in your microblogs as these screenshots show:

Blogs:
To get success in life, you need two things: A Backbone and a wish-bone!!
Similarly here on bitlanders your blogs works as the backbone of your buzz score and without them increasing your buzz score is hardly possible. The goal is to write the quality blogs written by your own skills and not copied by othr users' article or by another website. Blogs represents your skills of using your brain and vocabulary. Blogs are a vital source of training your brain to think in a special and attractive way. Following are the screenshots of some users who regularly post blogs and these blogs are what their buzz score depends upon: 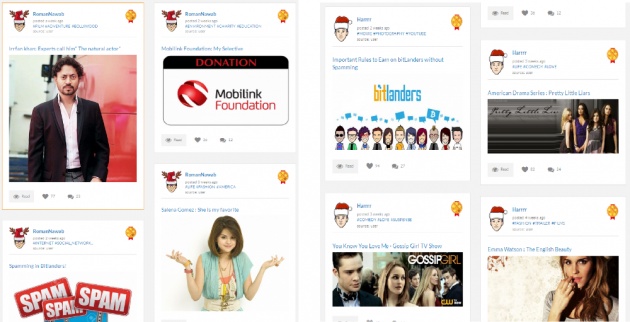 Gallery:
Gallery is that section where we upload our favorite pctures. Like movies this section also allows bitlanders to share their skills in capturing the natures beauty and whatever they are interested in. We should try to post quality pictures that can attract others and increase our buzz score.

Bagging for buzz and subscribing and making deals in global chat regarding this has now strictly banned here on Bitlanders.

For last a few months, this trend had became very common that people were just using Bitlanders to earn money which was harming the actual goal of making Bitlanders a vital Social Website for everyone and moreover the news were also discouraging by the odd appearance of the global chat. So bagging for buzz and subscribing has now been banned both in the global chat as well as in the comments.

Besides buzzing and Subscribing, posting something which containsome adult material or such a material promoting pornography is also prohibited strictly. In addition, trying to copy other users' article or a huge material from other website is also not allowed. If user thinks that adding a paragraph from a perticular website will add beauty to his article then he should mention the source from where h copied that. One who trys or manages to do those things which are prohibited here on Bitlanders no doubt has to face a strict behaviour of the management and his account can also be suspending.

Being an honest user of Bitlanders, I must appreciates these steps because such a policy which Bitlanders follow makes it an ideal social site for me and they keep maintaining it no doubt it will be the best among other like Facebook, Twitter etc. 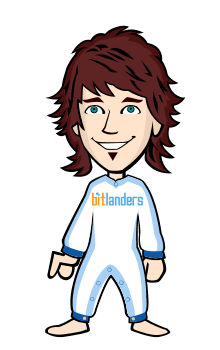