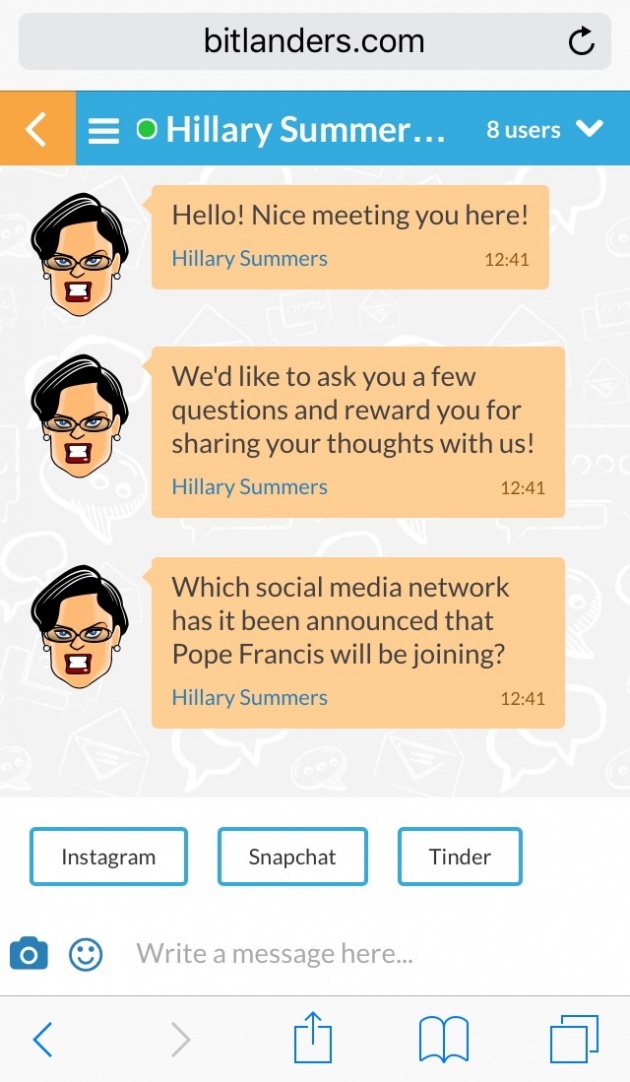 When I first chatted with @hillary-summers I had to open Twitter app to search for correct answers on topics like politics and celebrity related questions.

Answering would have been easier if there was an "I don't know" or " not that I know of" option. LOL! 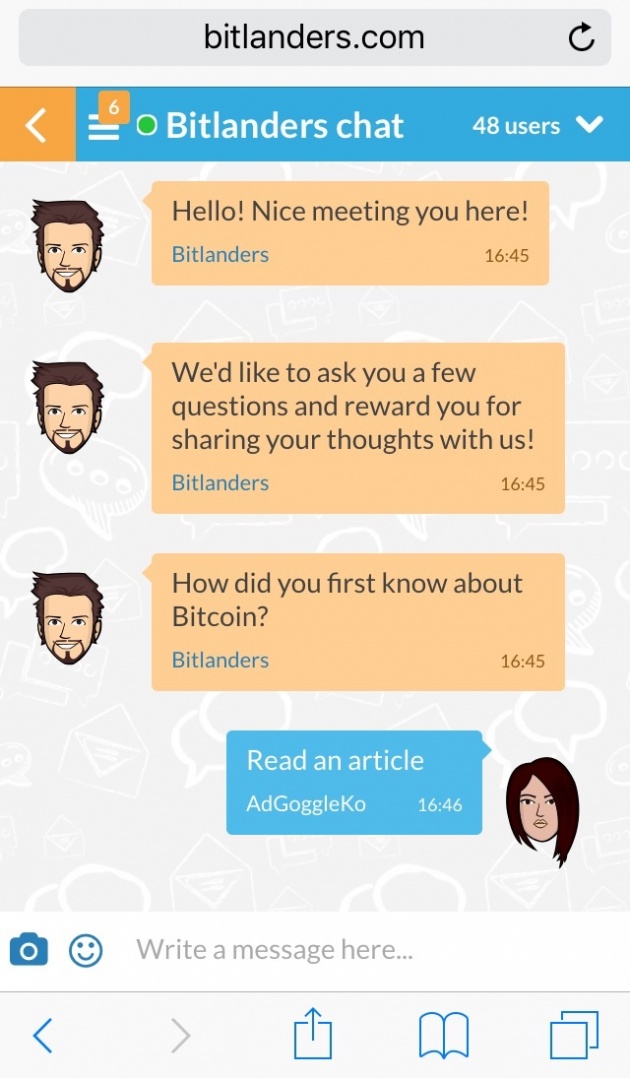 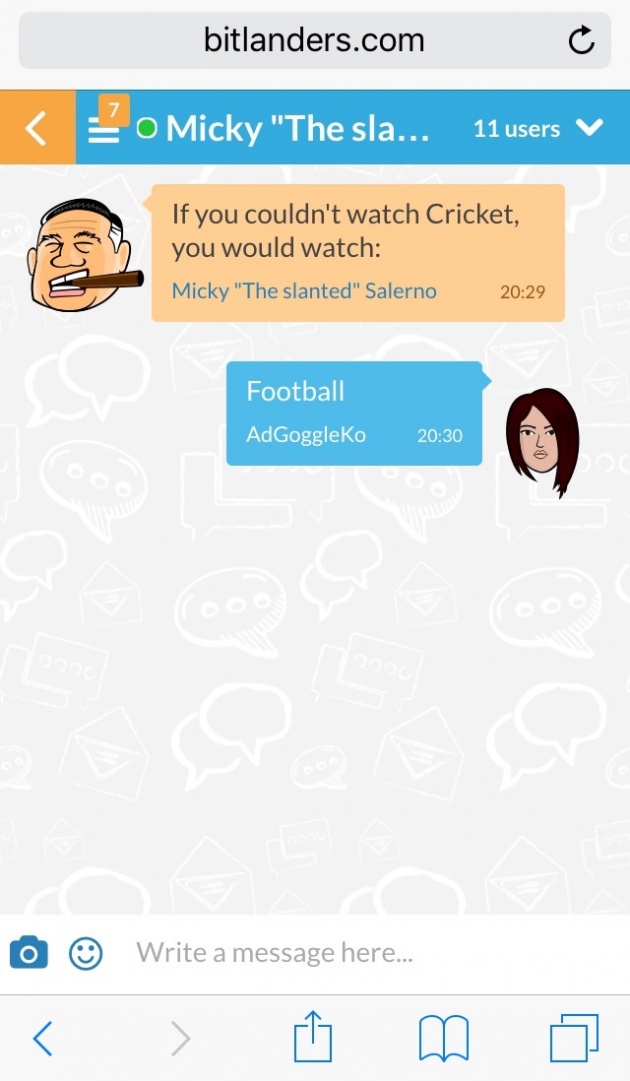 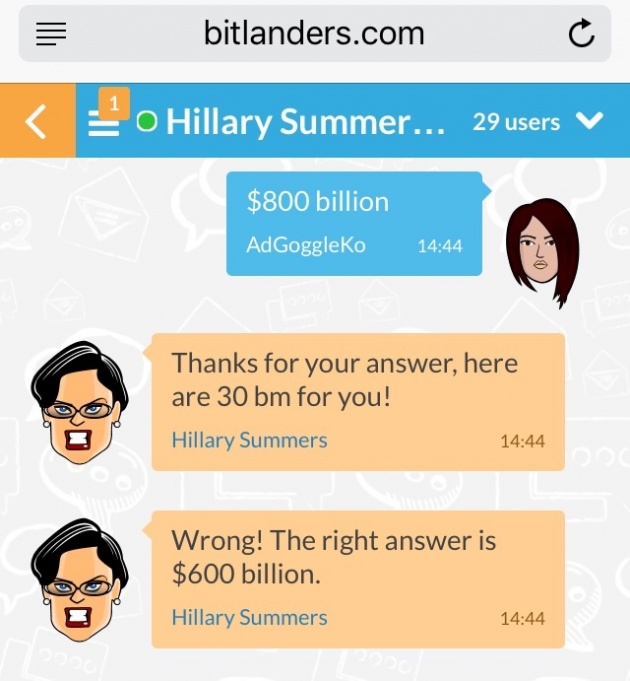 Later on I realized that whether your answer is right or wrong, you still stand to earn or gain bitMiles Loyalty Points. So, why should I bother researching or tear my hair out to get the correct answer. Haha! 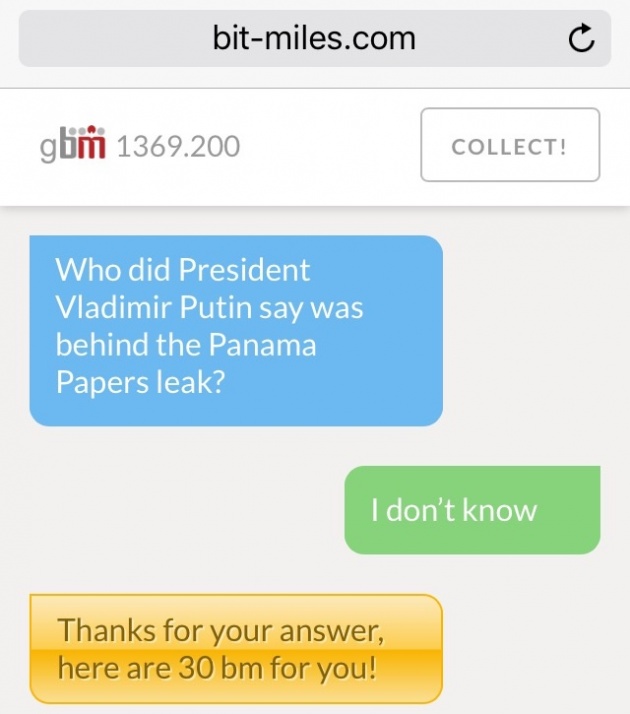 I also answer surveys at www.bit-miles.com without worrying about my answer, be it right or wrong. 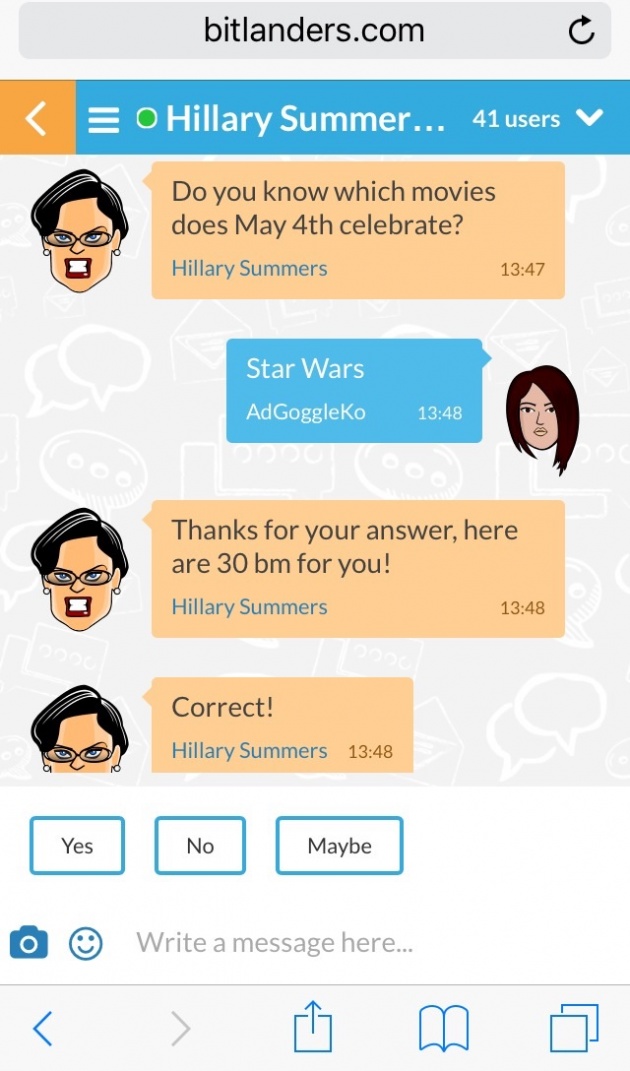 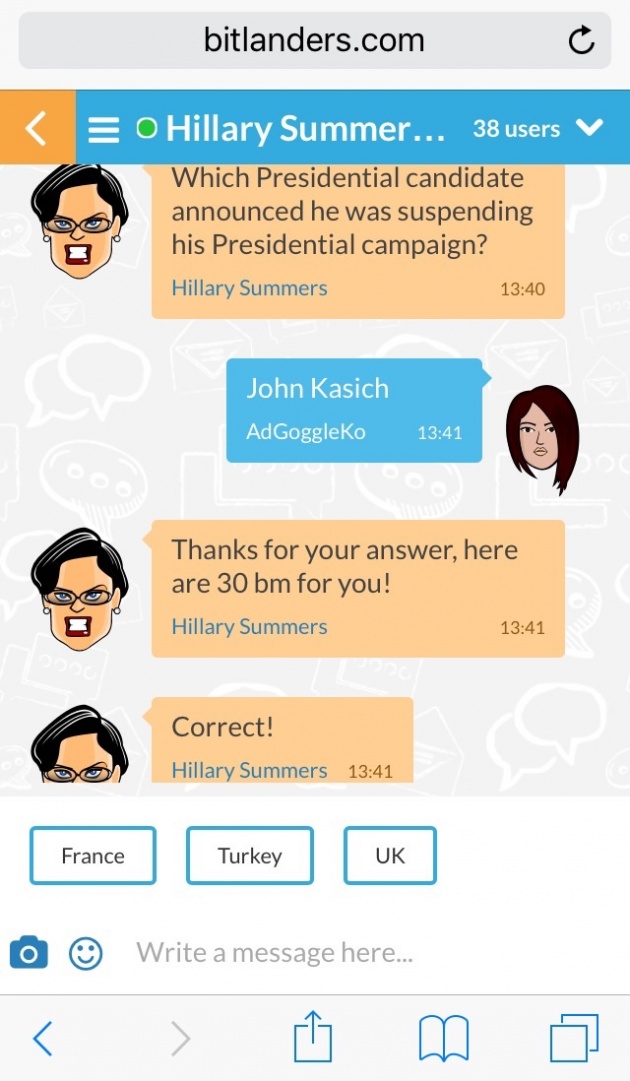 Of course, I always want to provide correct answers whenever possible! 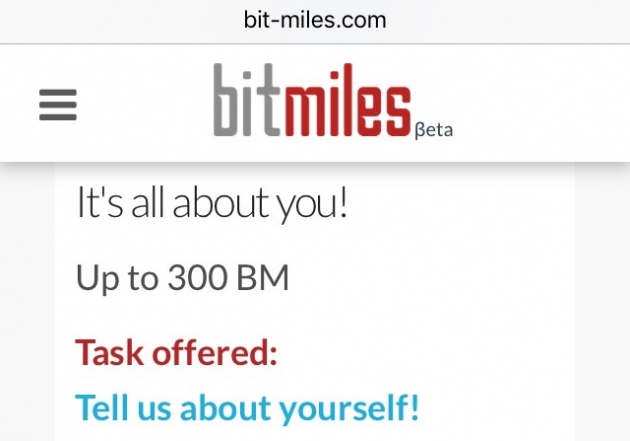 Well really for me, the easiest and fastest way to cope with unfamiliar online surveys or questionnaires is to answer questions about ONESELF. How can you go wrong with that? LOL

Anyway, the first question was -- "Do you prefer to win or
not to loose
?" I find that weird. Leaves you no choice but to say "win". Why? For me, life is like a game. There will always be many ups and downs as you go along living. To stay on top, you must always be a winner in everything you do. So, I prefer not to lose, if at all possible. I hope that answers that question. 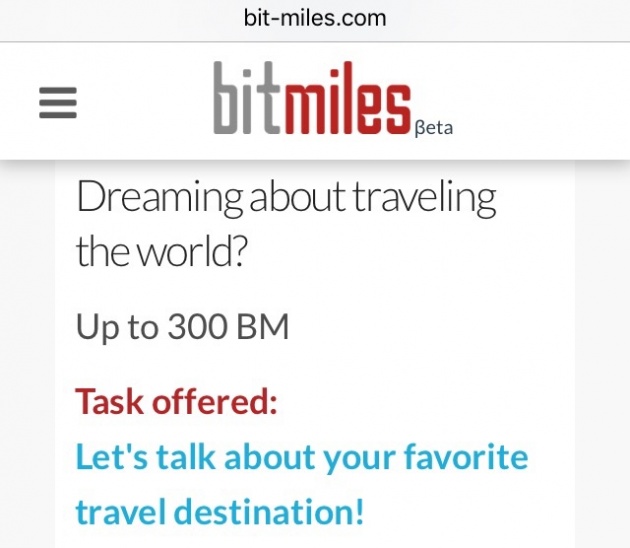 Another easier survey topic is about my favorite travel and dream destination. Good question! That of course depends on how much money I have in my possession.

If I had all the mullah in the world, my dream destination would be romantic EUROPE. I'd be extravagantly shopping in Paris, enjoying enchanting gondola rides in Venice (with a handsome Italian of course. LOL), go skiing in Austria and Switzerland, savoring excellent cuisine in Germany and perhaps sipping my favorite champagne in Monaco.

Now, if I had a reasonable budget, maybe I'd visit Hong Kong, Singapore or maybe Bangkok.

If worst comes to worst and I just had a few pesos in my pocket, my favorite destination would be to go downtown and watch a good movie while munching some popcorn.

God forbid, but if I had no money at all, my favorite destination would be our kitchen and go scrounging for what's ever left in the pot. Fair enough? 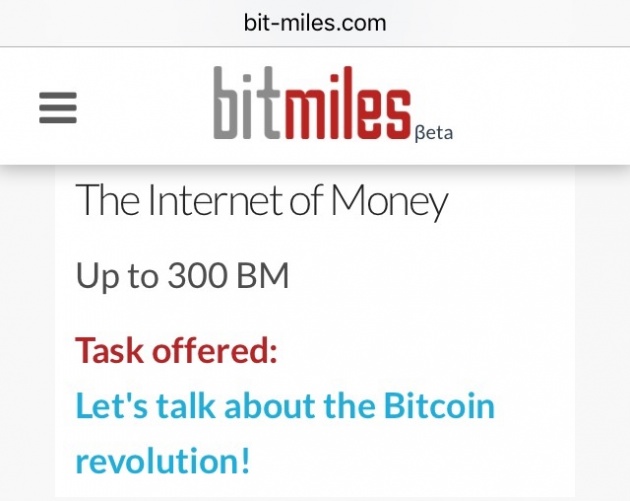 Another easier topic for me is about internet or online money. I first came to know of Bitcoin from one of their many bitLanders articles.

Like I mentioned in my previous bitLanders diary, I did search on the various opportunities to make money online and got interested on an article entitled, "Newbie Guide for Filipino bitLanders Philippines ". It stated that bitLanders pays via PayPal and/or a digital money called Bitcoin. It is an innovative payment network and a new kind of money using an average from the world's leading currency exchanges that is fast gaining recognition worldwide.

I then joined bitLanders to learn more about Bitcoin. My first 0.50 plus BTC earnings all went to bitLanders stickers, gems, avatar accessories and donations because I didn't know how to withdraw or convert Bitcoins until I found @Amor-Facistol-Rimas's and @Saori-Sam's blog posts about bitLanders payment thru coins.ph. I immediately signed up at coins.ph and redeemed "Instant Bitcoin bitLanders Payment 0.025 BTC".

Watch the above video by Mashable to learn more about Bitcoin.

Another digital currency is now fast catching up on the net. It is called Ethereum. Sadly, as an iPhone netizen, I can't access this new system because only desktop users can avail of it.

I have been a smartphone user since 2013. However, I am glad Bitcoin Wallets work on mobile phones.

I learned and I hope Jaxx's (Bitcoin & Ethereum Wallet) will soon have an iOS app that would work well. I'd certainly be excited to try it on my iPhone as soon as it becomes available.

You can watch the above video of David Seaman for more information.

There are more than six hundred digital currencies to date. Currently, the most popular one worldwide is Bitcoin and followed by Ethereum, then Ripple, Litecoin and Dash.

Are you in the habit of keeping abreast with daily news be it print, radio, TV or thru the internet?

Gee, you must be 50-60 years old or perhaps getting to be a senior citizen! LOL!

Studies reveal that in general, people from 7 to 20 years old would grab a newspaper only to read his favorite comics strip, entertainment, sports and classified ads pages. Rarely would he spend time reading the headlines or editorial columns. He would also spend more time listening or watching his favorite cartoons, entertainment programs, drama specials and sporting events. CNN, BBC or the local news networks are not his cup of tea.

Now, when he gets to be about 30-40 plus years older, he starts to browse, listen or watch the news of the day as well as going about his favorite routine tele-radio programming.

But when he hits 50-60, the daily tri-media news is numero uno on his early morning agenda. It always is his breakfast partner.

Things do drastically change however when one gets to be 70-80 years old. Your severe arthritis couldn't even keep your feeble hands steady holding the newspaper. Cataract prevents you to read the papers or enjoy TV viewing. You have difficulty listening to the news on radio because of failing ears. Putting on the radio on full volume will only earn the ire of your housemates. My my, with that age and condition, who would even care about the daily news anyway!

Well, God permitting, if you ever get to 90 no news is good news! Peace and quiet is the best news he'd rather have. LOL! But the good news is, I DON'T THINK I'LL EVER GET THAT FAR!

The GOOD, The BAD, and The UGLY of Politics

Let's start with The GOOD. Politics in any ideology or system of governance is a healthy sign of interaction and understanding amongst the political leadership and constituency of any nation. Good political leadership equates to unity, national growth and economic progress and development. Without a strong political will, a country will only stagnate and would remain underdeveloped and characterized with internal strife and conflict.

The BAD: To begin with, politics they say is as dirty as the word itself. That's true! In politics, you can always find the likes of deceit, corruption, greed, injustice, inequality, bigotry, plunder, killings or assassinations, etc., etc. Yes, no matter what, engaging in politics can prove dangerous. Even if you do and give your best, there will aways be those who would want to put you down. You can never satisfy your constituents. There will be a dissenting group plotting to do you wrong.

My grandfather once said, if you want to be a politician there will only be two causes of your demise. It's either you die of a heart seizure due to overwhelming problems and stress or perhaps die with a bullet hole in your head. I guess he is right.

The UGLY: Politics can start out good but can turn out ugly when self interest is at play. Case in point is a freedom loving democracy that ends up dictatorial against the wishes of the vast majority. Forcible ideological transformation is likewise a possibility.

Germany, after its defeat in WW1 saw a drastic change with its political players. From a dethroned monarchy, Adolf Hitler turned it into a Nazi dictatorial regime. Same case happened with Russia during that same period. From a Czarist monarchy it became a communist state under Josef Stalin. That's how politics is manipulated to serve the interest of a few.

Politics can also turn ugly once politicians unity is absent among its ranks. Iraq and Afganistan are examples of disunited politics. Factions fight one another to gain control of a beleaguered country.

Regional politics can also turn ugly once a super power exerts its dominance over its weaker neighbors. Such was the case of Japan when she started invading her neighboring countries to establish her political and militaristic agenda called the East Asia Co-prosperity Sphere. Currently, China is following a trend the Japanese took in those days. Their leaders and politicians have crafted and implemented such self-serving interests.

Politics is found everywhere. You have politics within corporations and offices no matter how big or small. Even the Vatican has its own share of politics among its bishops and priests. So does with other religious denominations or sects.

Needless to say, politics also exist in the basic unit of society -- the family. Politics has been and will always be part of our lives. Come to think about it. Will there be politics in heaven... or in hell? Hehe! Just asking!

***Images are my iPhone screenshots***

How To Earn Money Online