It has been months since I wrote my last blog here in Bitlanders. Things got a lot busier and it was just hard to find time writing a blog. Anyway, it's such a nice feeling that I am writing a blog once again here in Bitlanders. And this is where I really started writing about different topics. I used to write on other ad-revenue sites before, but it was all about personal blogging. Unlike here in Bitlanders, I was able to discover that I can actually write a blog outside of my comfort zone.

Here in Bitlanders we all know that one of the best way to increase our buzz scores is to grab the keyboard, wear our “thinking caps” and start writing whenever a double reward blog has been posted by Micky-the-slanted-salerno. There are two double reward blog topics that are currently on going here in Bitlanders. Blog about Sports and Social Good and Blog about Gelato and Survey Chat.

From being on and off to a total sign off for almost a month, writing a topic under one of the double reward blog topics is just a good way to start again here in Bitlanders. And to all new members who are starting here in Bitlanders, I encourage you to write, under those two double reward topics to  help  your earnings increase, before it expires. The blog about sports will expire on June 16 and blog about gelato is on June 17.

The topic that I chose is blog about gelato and survey chat. Well, here it goes.... 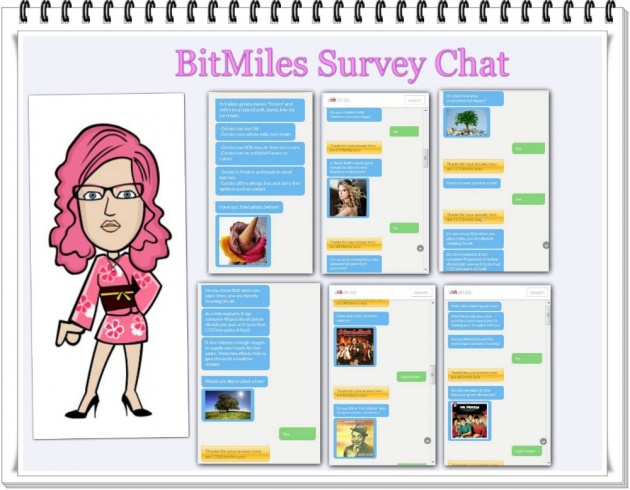 First let me share with  you guys, about BitMiles Survey Chat...

We all know what BitMiles is and it had been introduced to us members in Bitlanders as another platform where you can earn BitMiles points. In BitMiles to  make the platform more enjoyable, especially in terms of earning online and  for users to keep on coming back or continue to use the platform, they had introduced a new feature.

The new feature of BitMiles is their Survey Chat.  Before Survey Chat came in, I remember when BitMiles was introduced to Bitlanders members, to earn additional BM points we need to hunt for Bitmiles banners, promoted content with BitMiles banners and some application that a member can download. And there were tasks that varied on the location of the users. But now in BitMiles Survey Chat every users can earn once he participate on it. Cool right!!! 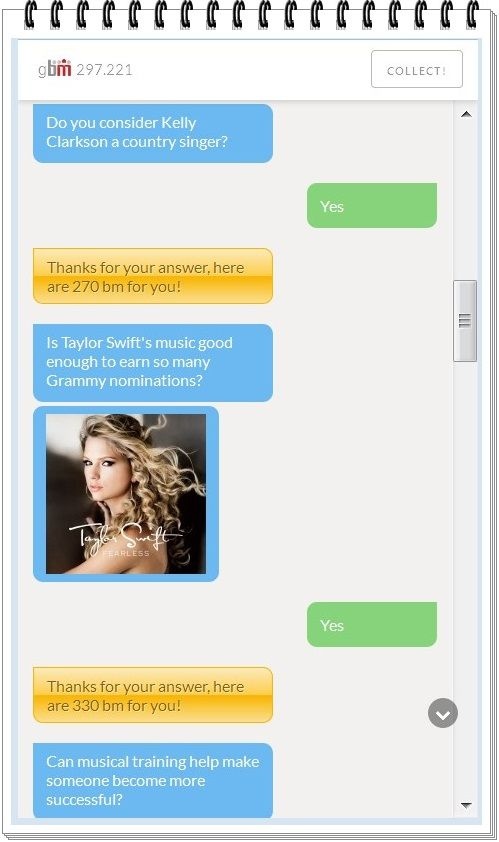 In BitMiles Survey Chat there are different topics that you can choose from like news, games, Bitcoins, money, travel destination, fashion, politics, environment, music, movies, lifestyle and other topics that you will be interested in answering.

Most of the questions can be answered by a Yes or a No and there are also other choices depending on the question regarding on the topic that you choose. Choices can be found at the bottom of the survey chat, you just have to choose one and clicked. But you don't have to worry or do some researching if you don't know the answer. Even if your answer is wrong you will still get points from it.

The starting BM (BitMiles) points depends on the topic or task offered that you take. There are topics that will start on giving you 30 BM, 60 BM or even 90 BM. Every time you clicked an answer whether it is right or wrong it will keep on adding, until you finished the whole survey.  Wonderful right!!! 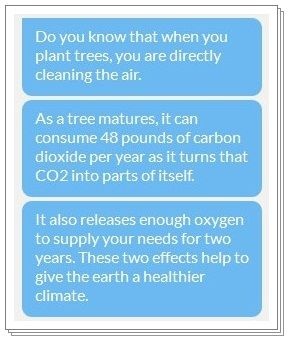 What I really like about the BitMiles survey chat is that, not only you will earn points from taking the surveys, but you will learn something new as well, through the topics on each surveys. When you chose the wrong answer they will give the right answer and they even share random trivia/facts about the topic. Which is really informative. 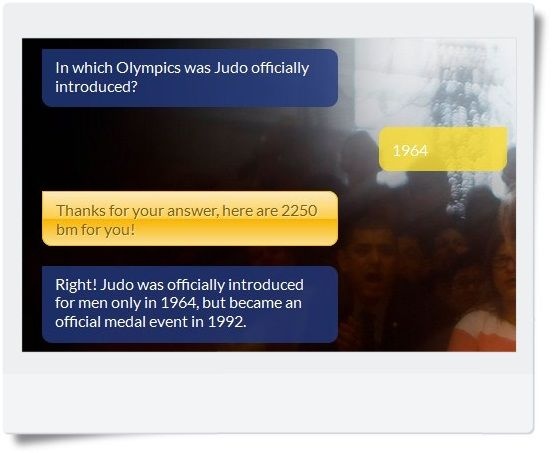 If you haven’t tried taking BitMiles Survey Chat or you are new to Bitlanders here is a quick tutorial on how you will login to BitMiles.

How to login in BitMiles and take Survey Chat

3. In your Dashboard you will find all the tasks offered where you can earn up to 300 BM points.

4. Simply click the task offered and it will direct you to a new tab to answer their Survey Chat. 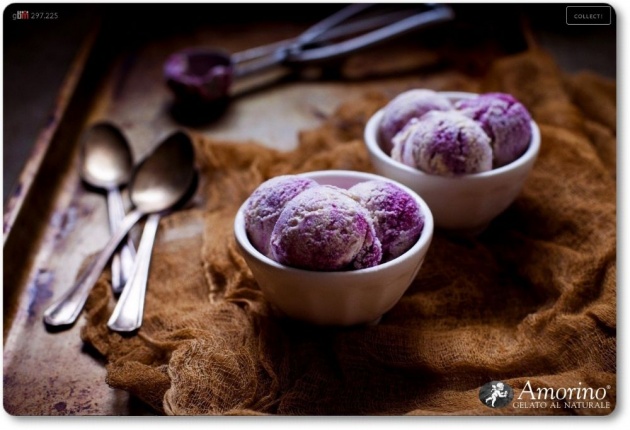 Gelato  [dʒeˈlaːto] -> means frozen and it also refers to ice cream in Italian word. Gelati [dʒeˈlaːti] is the plural of gelato. This delicious and healthy frozen treat originates in Sicily, Italy.

We all know that the founder and president of this awesome site "Bitlanders" and "Bitmiles" is an Italian businessman and philanthropist, Francesco Rulli. And probably that is one reason why they included gelato in their survey chat. For the members to know more about Italians healthy frozen dessert, gelato.

Let  us know more about gelato through Bitmiles Survey Chat...

Below are some of the screenshots of the Survey Chat that I took while answering the topic about gelato. Random facts about gelato and on how it is made and its nutritional contents. 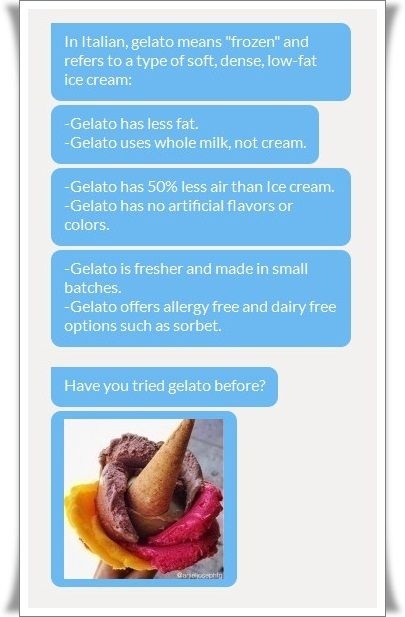 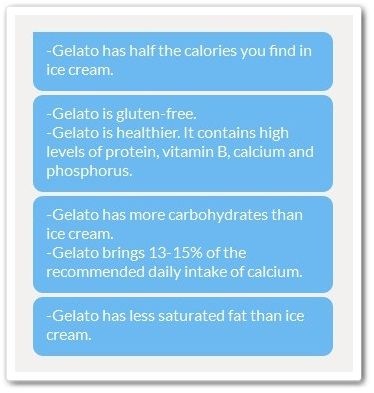 Here is my short clip of BitMiles Survey Chat: Ice cream vs. Gelato.

Gelato is the Italian style of making ice cream. Different name but the goodness of ice cream is there, but a more healthier version of ice cream. No one can say NO to an ice cream that is a known fact. It is like everybody's favorite for dessert, snack or while watching your favorite TV show.  And knowing that there is an ice cream that you can eat without that guilty feeling of gaining extra fat is just good to know, especially to those health conscious people out there. That is why gelato gained popularity because of its healthy and yummy taste.

Let us know the difference of ice cream and gelato...

The difference between ice cream and gelato 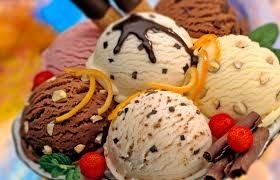 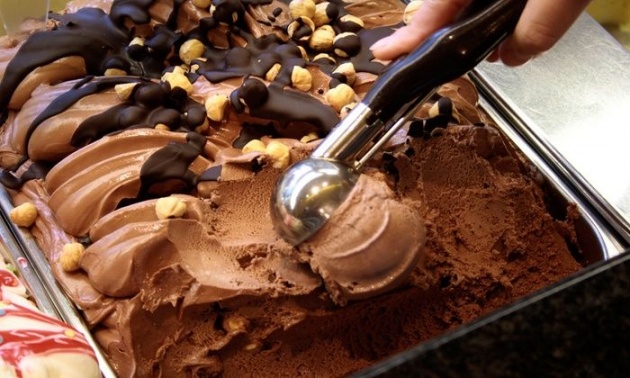 There are three main differences between ice cream and gelato. The air content,  the butterfat content and serving temperature.

1. The air content- Gelato is churned at a much slower time compared to ice cream. Making the air content whip in gelato lesser, that is why it is denser than ice cream. While in making ice cream more air is whipped to increase its volume.

2. The Butterfat content- In making ice cream it uses more cream than milk, that is why it is called ice “cream”. And cream has more butterfat compared to milk. While in making gelato it  uses more milk than cream.

Here is the short video that talks about the difference of ice cream and gelato.

My thoughts about Ice Cream and Gelato

For someone  like me who lives in a tropical country... Frozen treats, refreshments or anything that is cold and sweet is just simply one of the best way to beat the heat of the sun.  Most especially during the summer months, where the heat of the sun is really high, ice cream is one of the famous cold treats you would want to have.

Here in the Philippines one of the famous brand of ice cream is Selecta. And it has been my favorite ever since. RFM Corporation is the manufacturer of this ice cream products. And they started since 1933. Selecta ice cream has been on the market even during the time of my great grand parents. More flavors had been introduced and patronized by its avid consumers.

Just a short trivia my very first job was a production crew at Selecta, where every time that I would went inside the working area it would feel  winter because where in the ice plant (ha-ha). My favorite ice cream flavors from Selecta are cookies and cream, quezo real and ube royale. 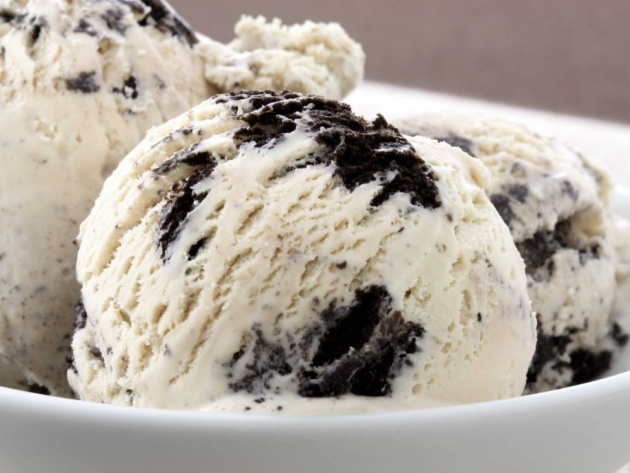 I live here in the Philippines where ice cream is much popular compared to gelato. And if you are craving for a frozen treat it is much easier to find a store that sells ice cream than gelato.

Gelato is the healthy version of ice cream and who would not want to eat a healthy dessert, but ice cream on the other hand which my taste buds grew to love will not hurt to indulged every once in a while.

That's all for now, thanks for reading!!!!