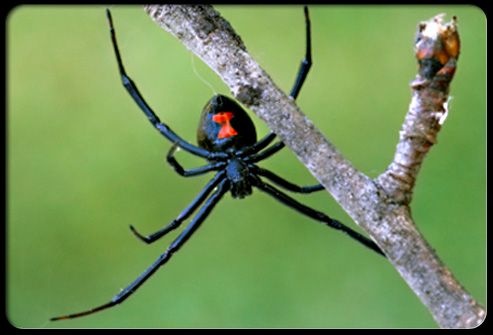 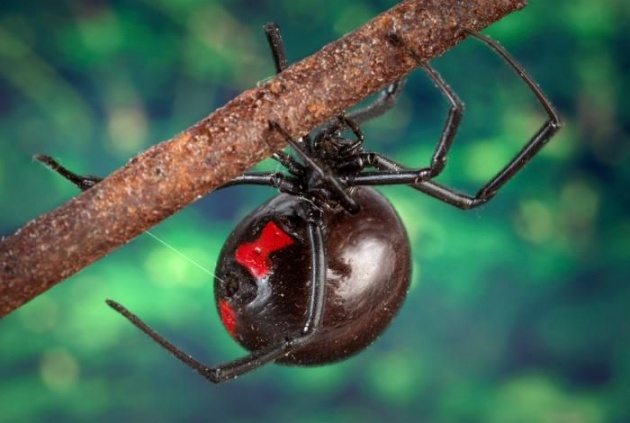 Black widows are notorious spiders identified by the colored, hourglass-shaped mark on their abdomens. Several species answer to the name, and they are found in temperate regions around the world.

This spider's bite is much feared because its venom is reported to be 15 times stronger than a rattlesnake's. In humans, bites produce muscle aches, nausea, and a paralysis of the diaphragm that can make breathing difficult; however, contrary to popular belief, most people who are bitten suffer no serious damage—let alone death. But bites can be fatal—usually to small children, the elderly, or the infirm. Fortunately, fatalities are fairly rare; the spiders are nonaggressive and bite only in self-defense, such as when someone accidentally sits on them.

The animals most at risk from the black widow's bite are insects—and male black widow spiders. Females sometimes kill and eat their counterparts after mating in a macabre behavior that gave the insect its name. Black widows are solitary year-round except during this violent mating ritual.

These spiders spin large webs in which females suspend a cocoon with hundreds of eggs. Spiderlings disperse soon after they leave their eggs, but the web remains. Black widow spiders also use their webs to ensnare their prey, which consists of flies, mosquitoes, grasshoppers, beetles, and caterpillars. Black widows are comb-footed spiders, which means they have bristles on their hind legs that they use to cover their prey with silk once it has been trapped.

To feed, black widows puncture their insect prey with their fangs and administer digestive enzymes to the corpses. By using these enzymes, and their gnashing fangs, the spiders liquefy their prey's bodies and suck up the resulting fluid.