This time i am going to talk about blast in Quetta and Sayings of Musharraf. 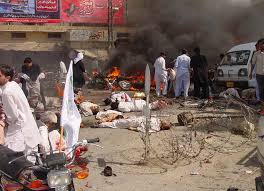 QUETTA: Jamiat Ulema Islam-Fazl (JUIF) chief, Maulana Fazlur Rahman had a narrow escape from a suicide blast, which took place immediately after his address with a public gathering at Mekangi Road here on Thursday.The blast however left one dead and eleven injured, out of which four are said to be in precarious condition at a hospital.According to details, JUIF had organized Mufti Mahmood Conference in Quetta, which was addressed by the party chief, Maulana Fazlur Rahman.

The blast took place as the JUIF chief was about to leave the venue after concluding his address. The powerful explosion damaged the vehicle of Maulana Fazlur Rahman and shattered the window-panes of the nearby buildings.As a consequence, a man was killed and eleven others were injured, however the JUIF chief remained safe during the incident.Meanwhile, law enforcement agencies (LEAs) and rescue teams immediately rushed to the spot and shifted the injured to hospital.Medico-legal sources said that out of eleven injured of the blast, four are in critical condition.

“Our security forces are well aware about the protection of eastern border”, he said.Referring to Kashmir Issue, he said people of Pakistan are ready to sacrifice everything over the issue.“It is Pakistan Army that has kept a control on the emotions of Pakistanis”, he added.

Pervez Mushrraf accused India for the recent aggression at Line of Control (LOC). Pakistan is always ready to country any aggression from Indian forces.Denying Indian allegations on Pakistan for spreading terrorism in India by saying “ India don’t have any proof of Pakistan’s involvement.