Two inches of snow covers the ground here in the mountains of Virginia this morning, and the falling flakes show no sign of stopping. At the Withrow Estate we have a fire in the hearth, coffee in the pot, and pancakes on the griddle. I pause and smile as I hear the sounds of a laughing toddler, a lovely wife, and a loyal dog emanating from the Great Room.

The weather forecast suggests another twelve to twenty-four inches of snow are on the way this weekend. There will be no salt trucks or snow plows venturing out to the gravel road that connects our property with the rest of the world which means we will not be going anywhere for a few days. Wife Rachel, a wedding coordinator at the nearby mountain resort, has already rescheduled the various events and tastings she had booked this weekend in anticipation of our snow days. She is not terribly enthused about being snowed in for the weekend, but I can think of nothing more serene. In fact, a number of years ago I had a fleeting vision of this exact occurrence. 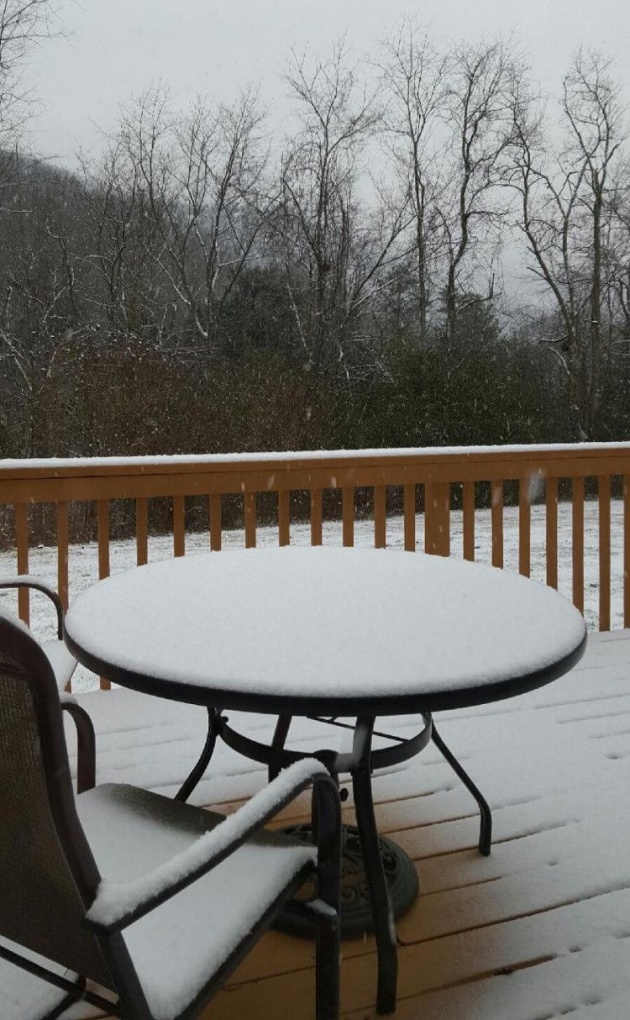 Back then my life was much different. It was much faster, much louder, more stressful, and much more mindless.

Working at the corporate headquarters of a major mega-bank meant I had very little time and energy for anything else during the week. I lived in a sprawling 300-house suburban development in which every third or fourth house looked exactly alike except for different color siding.

I awoke every morning to the screech of an alarm clock. After one or two snoozes I would jump out of bed, hurriedly shower and get ready for work, hop in my car and point it in the direction of the interstate. I would fight rush hour traffic to get to the light-rail station a few exits down where I would park in a three story parking garage and hope I didn’t miss the 7:35 train.

There are few gloomier ways to start your morning than riding a light-rail downtown with other corporate bankers, accountants, lawyers, and analysts. A simple glance around made it very clear that not a single person en route to work was excited about his upcoming day. A foreboding pall seemed to linger in the air.

Sometimes you would get a good seat or standing corner where you could tune out the dullness in peace. Sometimes you would get a bad spot and run the risk of a very foul smelling person sitting next to you. Sometimes the train had been held up for whatever reason and you were forced to pack in sideways like sardines in a can because the train was carrying both the 7:25 and the 7:35 passengers. One time a poorly-spoken but very enthusiastic lady yelled for five minutes about how the world was coming to an end. In that moment I may have believed her.

Upon arriving at the station downtown it was a scramble to scurry off of the train and walk the two or three blocks to the office buildings. Everyone was in the same boat – be logged into the system by 8:00 am or run the risk of having a chat with the boss.

The urgency diminished once you were logged in, however. For some employees, thirty minute coffee breaks were the first task on the daily agenda after logging in. You see, what’s important in the corporate banking world is following protocol and adhering to institutional systems. Logging in by 8 am is of the utmost importance; what you do after that incurs much less scrutiny so long as you follow the crowd.

This dynamic was very strange to me at first. The 24-year old version of me took to his first corporate job with the attitude that he would out-work and out-produce everyone in sight. And for the most part he did initially.

To his surprise, however, there was very little incentive to do so. As long as base goals were met the boss hardly cared, the bonuses were arbitrary, and the coworkers told him to stop working so hard and to stop being so darn happy all the time. Then the company implemented an expensive third-party software/systems package that added unnecessary bureaucracy and bottlenecks which made it difficult for the entire team of forty-or-so associates to meet the same monthly production numbers that 24-year old me, and numerous others, had been doing single-handedly.

24-year old me could not comprehend why in the world the company would sabotage the production capacity of one of its own departments. "You are making a mistake!", I shouted.

Now I understand such behavior is par for the course across corporate banking and across all of government. It wasn't a mistake, there was a sweetheart deal in there somewhere. Needless to say that was when I decided to exit the rat-race, but I had no idea how I would do so until several years later.

So I trudged along the rat-race for a bit longer, jumping ship to a different mega-bank only to find the work equally unfulfilling. But as my escape plan began to take shape, I began to envision days just like today. I began to envision a life that blended timeless simplicity with modern technology. Then the message would pop up on my computer screen informing me of another pointless meeting that had just been scheduled and the vision would fade.

So it went for several years, and during that time period I did not seriously think I would be able to realize my vision. But then I woke up this morning and the vision was reality.

If you are interested, my flagship course: Finance for Freedom: Master Your Finances in 30 Days will walk you through the analysis and strategies I used to escape the rat-race and attain my once-fleeting vision.

Instead of fighting rush hour traffic, my mornings are now spent sipping coffee and working on projects that are meaningful to me. Instead of a boss, the only person I have to answer to is a beautiful little toddler. Instead of a drab conference room, my Friday meetings take place on the side of a mountain behind my home with dog Boomer leading the way. Instead of a loud sports bar downtown, my weekend entertainment consists of a glass of fine whiskey beside a crackling fire.

I successfully traded noise, stress, and complexity for the timeless simplicity of country living. Twenty years ago such a trade would have required me to sacrifice certain conveniences and endeavors in exchange. With modern technology that's no longer the case.

This secluded property at the end of a gravel road deep in the mountains of Virginia is connected to the World Wide Web via fiber-optics Internet service. With a click of a button on Amazon.com I can order products originating from anywhere in the world and they show up at my doorstep a couple days later. I live in the most sparsely populated county in Virginia twenty minutes away from the nearest town which happens to be the third-least populated city in the state. Despite this, I drink coffee from Seattle, tea from Japan, and hot cocoa from South America. To the extent possible I purchase locally raised meat and locally grown vegetables, but you can't get too far in my home without finding an electronic device or trinket that says “Made in China” or “Made in Vietnam” on the back of it.

A wireless router enables me to write these journal entries from my side deck in total privacy with nothing around but an occasional deer and the rugged cliffs looking down at me from a distance. I follow the financial markets daily and I receive financial publications from all over the country instantaneously by email. I am able to earn a little income from various online ventures without leaving the comforts of my home office. Some of this income even comes in the form of a digital cryptocurrency called Bitcoin. My finance course has reached users in 117 different countries. From my secluded mountain property I periodically communicate with people from all over the world – all thanks to modern technology.

This dynamic is completely unprecedented in history, and I don't think the global implications of this technological functionality are yet understood. One of my favorite books, The Sovereign Individual: Mastering the Transition to the Information Age by James Davidson and William Rees-Mogg, saw much of this technological advancement coming back in 1999, and the authors took the time to flesh out many of the socio-political implications. Examining the world from my philosopher's perch today, it strikes me that they were very prescient in their foresight.

Not to stray too far from the point, modern technology enables individuals to seek their own tranquil simplicity without sacrificing modern comforts or their standard of living.

Here's what it comes down to: individuals must create their own reality or else it will be created for them. This concept has been expanded upon by numerous thinkers over the years, but I think Napoleon Hill's Think and Grow Rich may have spelled it out best.

As Marcus Aurelius pointed out nearly 2,000 years ago, your life is a mirror image of your thoughts. Years ago I had a vision of blending timeless simplicity with modern technology to create a peaceful and prosperous life of my own making. Today I woke up to snow in the mountains...

At nearly 2,000 words, this journal entry has veered to the verbose side. Wife Rachel keeps telling me to keep these entries shorter, and I always agree to do so. Maybe next time, I suppose. In the spirit of simplicity, I want to leave you today with a quote that came across my desk this week. I found it profound, perhaps you will too.

Truth has to be repeated constantly, because Error also is being preached all the time, and not just by a few, but by the multitude. In the Press and Encyclopedias, in Schools and Universities, everywhere Error holds sway, feeling happy and comfortable in the knowledge of having Majority on its side. - Johann Wolfgang von Goethe