BLOG #226: The Octothorpe: A tool for virtual vanity

Before there was the word hashtag, there was octothorpe.  The symbol we use in social media today to tag something or someone, especially Twitter and Facebook, we call hashtag is called "pound" or to indicate a number.  It is also called octothorpe.

The image above is a symbol for pound - a measurement we use in determining weight.  The abbreviation "lb" is from the Latin phrase "libra pondo" which means pound by weight.  In order not to be confused with the British pound currency, they also named the symbol "number."  When we dial some numbers, we also use this symbol before certain numbers.  In terms of music, the pound symbol is called "sharp" to indicate a note is one half step higher. 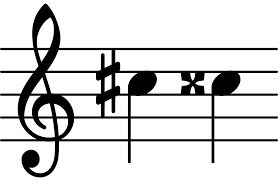 However, the "official" name for this hashtag symbol is octothorpe.

According to some history, the "creation" of the pound symbol was cooked up by employees at Bell Laboratories - where the first telephone was invented.  Back in 1960s, the pound symbol was placed in the telephone keypad for the technicians or employees of the company to send instructions to the their operators.  There are some reports on how the name "octothorpe" came to be.  Some say it was named after Olympian Jim Thorpe.  The more acceptable explanation would be "octo" means eight and "thorpe" is an Old Norse word that means farm or field.  Thus, octothorpe means "eight fields."  However, even that seems to be a point of discussion, too.  Some may agree on these reasons, some may not.

Whatever the real reason maybe, it was the technicians of Bell Laboratories who started using octothorpe.

The word hash is referred to the military stripes that were placed on the sleeves to indicate years of service and tag is used to indicate something.  Thus, the hashtag is born.

Chris Messina is said to be the first person to use the symbol hashtag with the words #barcamp.  A technology expert, he came up with the idea of using that symbol to gather discussions regarding Barcamp.   His tweet where he first used hashtag in August 2007 reads:

It was Chris Messina who made social media sites particularly Twitter famous through the creation of hashtag.  You can now easily find a certain topic or blog or post with the help of hashtag.

Why use octothorpe (hashtag)?

Nowadays, you see this famous symbol used in Twitter, Facebook and other social media.  This is one reason to gain attention or popularity on a certain topic.  A lot of hashtags were created, even some people use this as motto or personalized slogan.  You use hashtag to "tag" a certain topic, a particular name, title, phrases, sentences that may make certain impact or gain popularity .  You can do this in your tweets, post, photos and what-have-yous to direct or link that hashtag to your account, blogs, etc.  This  is important for income-generating sites so that when people search for that certain hashtag, they can be directed to your post.  It is important that you tag popular and unique hashtags.

Recently, a segment on a certain local TV show made a mark in the history of hashtag - #aldub.

AlDub is a "love team" that was created from the idea of Dubsmash - another trend nowadays wherein you take a video clip or sound clip made famous by a certain person be it from movie or song and you use that as your audio and you lip sync to it, making it look like you are using the audio from that clip as your own.  The characters of this AlDub love team or MaiDen are Alden Richards and Maine Mendoza.  They have a segment in a noontime variety show where they are expressing their love via split screen frames - Dubsmashing, throwing kisses, and reading each other's words through by writing what they want to say in a piece of paper then showing it to the camera for the other to read what was written.  Their love is hindered and at the same supported by lola (grandmother) Lola Nidora.  You can read more about this here.

While this was a popular Philippine TV show and to other peoples abroad, they made others around the world curious as to why AlDub is trending in social media.  They first made a mark by hitting 12.1 million tweet in 24 hours with their hashtag #ALDUBMostAwaitedDate that happened on September 19, 2015.

Then, a week later, on September 26, 2015, they surpassed that by reaching a tweet of 25.6 million in just a day with their #ALDubEBforLOVE hashtag.

Below are the videos taken from YouTube.  Note that these videos are in Filipino.

Another popular noontime show here in the Philippines is It's Showtime or simply Showtime. This is a show different from where AlDub is shown.  At the time AlDub became mainstream in the other TV network, Showtime decided to guest in their show Pastillas Girl.  The story of this girl is that she has been betrayed by her boyfriend and her bestfriend.  She then created a video of How To Make Pastillas for the Broken Hearted.

Note that the video below is in Filipino.

Pastillas de Leche or more commonly known as Pastillas is a sweet delicacy made from sugar and milk.  In her video above, Pastillas Girl narrated how to make such candy but infusing in it how a certain person played with her feelings and betraying her.

It's Showtime tried to add this to their show as their answer to the other network's AlDub.  They tried creating their own tags such as #showtimepastillas , #showtimemagpastillas, etc to try to boost the show's rating and hoped to make a trend.  However, AlDub love team beat them to it.

Here is Pastillas Girl's first appearance in It's Showtime.

So if you want to be known in social media, use hashtags to popular keywords or topics in your tweets, blogs or other social media sites.