Bones - The Conspiracy in the Corpse 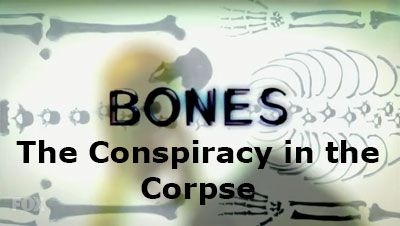 "The Conspiracy in the Corpse" is episode one of season ten of Bones, the forensic drama television series loosely based on the novels and life of anthropologist Kathy Reichs. In this episode, Booth is released from jail so there is only a limited amount of time to go after the conspiracy.

In the previous episode, the season nine finale, "The Recluse in the Recliner", Booth's classified past was brought up in front of a Congressional hearing regarding his promotion, as whoever was running a blackmail conspiracy, either from within the FBI or with the help of someone who was appeared to be trying to discredit him. They obviously didn't believe that Booth had stopped investigating the murder case - and he hadn't, as the Jeffersonian had discovered a lot of evidence, but not who was behind it. Booth, with Brennan's help, had managed to kill those sent to kill him who were presumably working on behalf of the conspirators, but was injured as a result.

The surgery had gone well but Brennan discovered that Booth was under arrest by Deputy Director Stark for killing FBI agents sent to arrest him. Now, the FBI does not tend to send agents in without any ID, who don't identify themselves as FBI, with automatic weapons and who shoot first, so this was quite clearly nonsense. So, why was Booth under arrest? Is Stark in on the conspiracy, is he another blackmail victim or is he simply following orders? Stark had Brennan taken into custody as well. 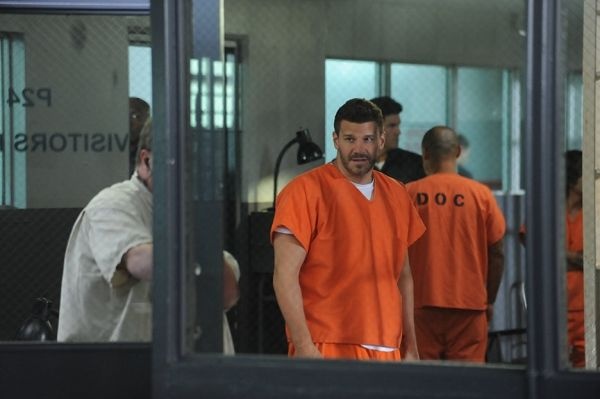 Booth is Now In Prison

This episode opens 3 months later and Booth is in prison. As a cop, he is not popular with the other inmates, a prisoner with whom he has made a mutual protection pact to watch each others' backs warns him about an inmate with a grudge. Booth is on the phone with Brennan, who tells him she has an exhumation order. The call is cut short, because Booth is being treated as a cop killer by guards. He ends up getting in a fight with the prisoner he was warned about. 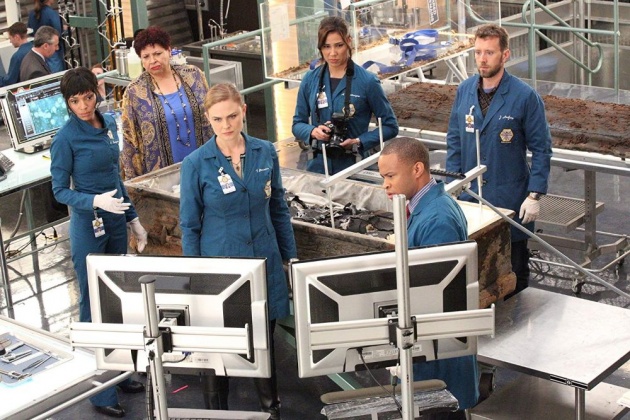 At the Jeffersonian, the remains have arrived and there is an unusually large amount of adipocere on them. Clark wants to know what's going on, as he's helping. Brennan says it's not his concern, but Cam tells him anyway. The man, Cooper, has been dead for 16 years, supposedly of leukaemia, but it's suspected that he was murdered. There was a lot of data on Cooper on Foster's ring, and he might be the starting point for the conspiracy. The FBI has no idea that the remains have been exhumed, and Booth wants to keep it that way. 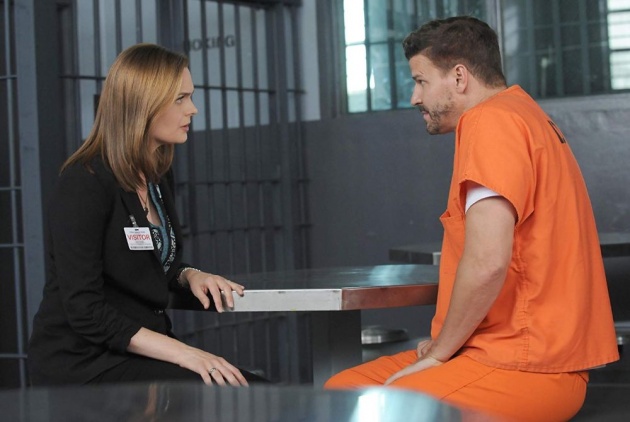 Brennan Wants to Get Booth Out Of Prison

When Brennan arrives at the prison, Booth is clearly injured from his fight. Brennan tells him that the conspiracy is trying to keep their hands clean by getting booth killed in prison. There is information on the prosecutor that put Booth in prison on the chip, which Brennan says they can use. Booth tells her not to, as he doesn't want the conspirators to know that the investigation hasn't been shut down.

However, Brennan goes to see the prosecutor, Brady. When he finds out who she is, Brady says he has nothing to say. So Brennan gives him a piece of paper. Brady asks if she knows what she's doing - Brennan says yes, she's blackmailing him. Very matter of factly. He asks if she knows the penalty for blackmailing a federal prosecutor. Brennan clearly does. She also states that she has evidence that he is guilty of witness tampering, accepting bribes and money laundering, and that given the people he was involved with, these would get him killed. So Brennan is convinced that Brady won't arrest her.

Booth is Out and the Charges Are Dropped

So Booth is released and the charges are dropped. Booth says he could handle himself, but Brennan says he couldn't, not in jail. And that he would have done the same thing for her. They are going to have to move fast now. 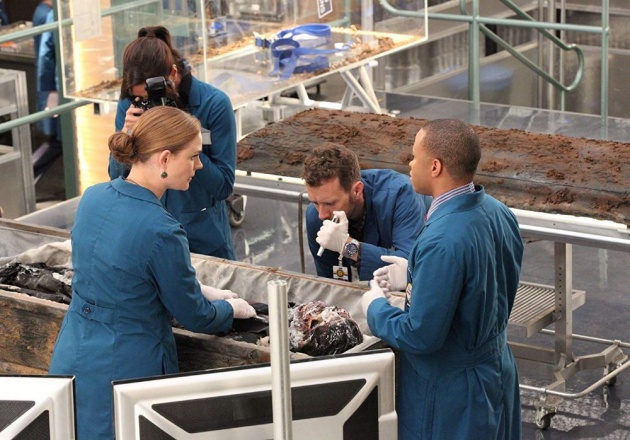 The Remains Were Deliberately Compromised

Cooper's remains are in poor shape; there is an unusual amount of urine in the coffin. This has been added to ensure that the bones couldn't be examined, or the adipocere removed. 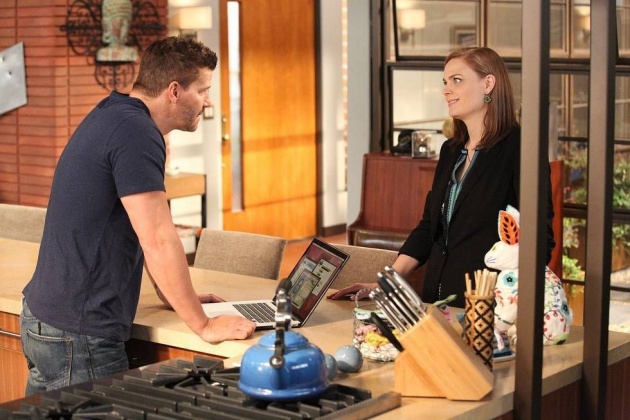 A New Home for Booth and Brennan

Brennan has a new house, because their last one was shot up and blown up. She has kept Booth's things and, given his feelings about her money, spent a lot of his too. 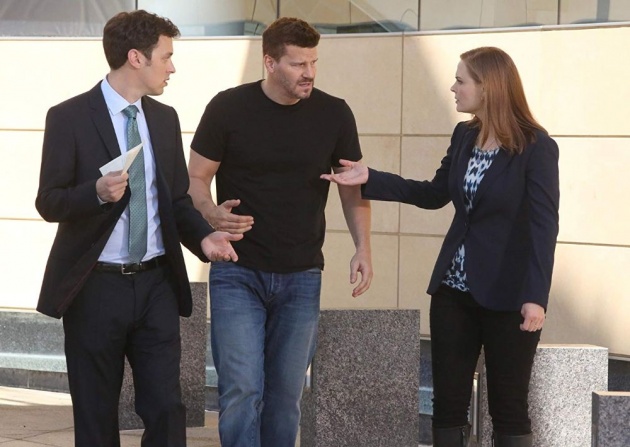 A Dying Man Who Was Murdered

Cooper was an EPA agent who kept being promoted, even though he wasn't qualified. He was murdered, even though he had leukaemia. He died right after refusing a permit for Sanderson Chemical to build a new plant, a permit that was granted after his death. Booth wants to get back on the case, but Sweets says that he can't go into work as the other agents think he killed three colleagues.

Hodgins says that whoever is behind everything won't go after Booth again, as that would tip their hand. Booth is also getting too personally involved in the case.

Continuing in the Next Episode

The story continues in the next episode, "The Lance to the Heart". Sadly, there's something that happens in this that I already knew, thanks to a YouTube search for a different episode from a completely different season bringing it up as the top result.

Bones - The Conspiracy in the Corpse Trailer