Bones - The Corpse at the Convention 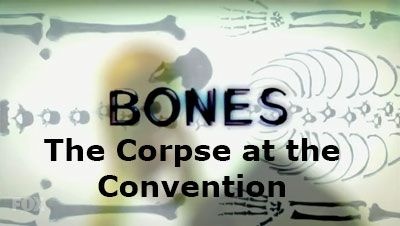 "The Corpse at the Convention" is episode five of season ten of Bones, the forensic drama television series loosely based on the novels and life of anthropologist Kathy Reichs. In this episode, a body turns up at the forensics convention the Jeffersonian team is attending.

Brennan is Going to Be a Keynote Speaker

Brennan and Booth are at home; Brennan is practicing a speech she is going to give at a forensic convention. She is going to start with a joke about Schrödinger's Cat, which she tells Booth. He doesn't get it. Booth suggests that Brennan tells a joke about a restaurant on the Moon having no atmosphere. Brennan doesn't really get it. She's also nervous about being the keynote speaker at the National Forensic Sciences Convention. 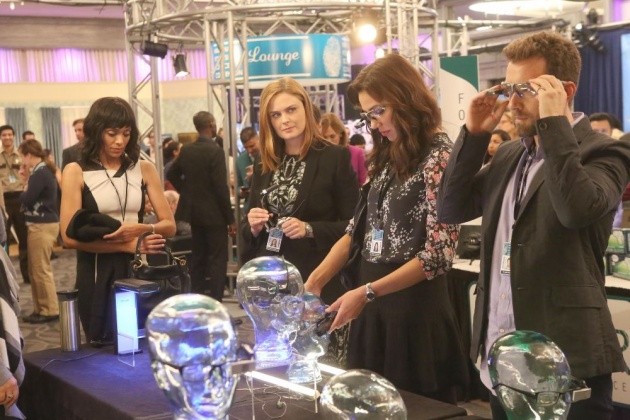 Everyone is Treated Like Rock Stars at the Convention

Brennan arrives at the convention with Cam, Hodgins and Angela. Angela, seeing the others being approached by people at the convention, says that it's like being with her father. Then someone approaches Angela and tells her how brilliant she is. Angela likes that bit.

Hodgins is approached by a woman, one he clearly doesn't like. Hodgins says that the woman, Dr. Leona Saunders, is an incompetent forensic anthropologist and a disgrace to her profession. Shortly afterwards Hodgins excuses himself to speak to Dr. Saunders. The discussion looks angry. 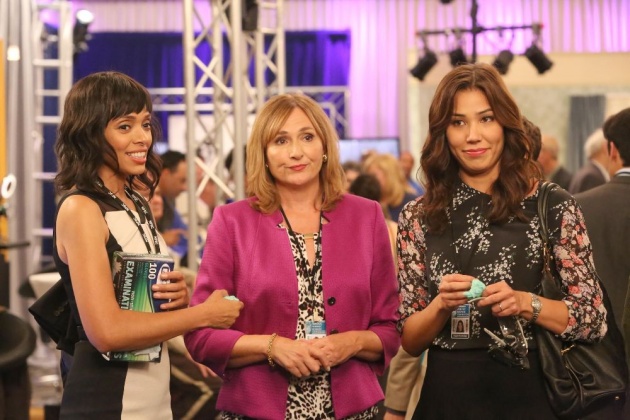 The Return of Tess Brown

Tess Brown, the forensic novelist who deliberately picked a fight with Brennan in "The Dude in the Dam" in order to get publicity for her books (which badly backfired after a fan filmed Brown calling her fans idiots). Brown says that she is at the convention researching her new book; Brennan asks why as she never bothered researching her previous ones. Brown says that her days of sloppy research are over, then a Dr. Harkness - who seems to know Brown - approaches to tell Brennan that it's time for her speech.

Brennan starts giving her speech, leading with the cat joke, when the fire alarm goes off. Tess Brown says 'Oh my god, the place is on fire.' There are human remains burning in the plumbing and electrical room, and a strong smell of petrol. Brennan tries using an extinguisher on the remains, but it doesn't work. In fact, it looks to make things worse. So, even though the evidence is being destroyed, they have to evacuate and let the professionals deal with the fire. 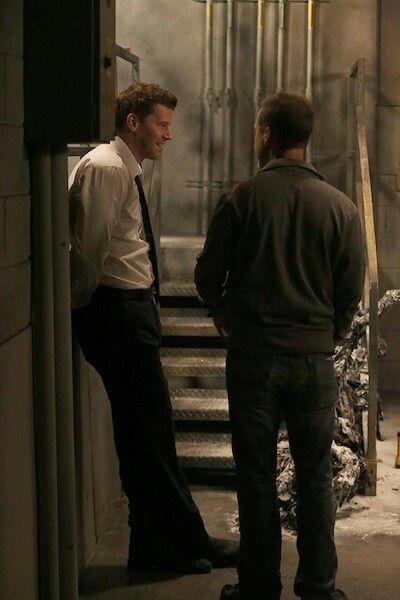 Once the fire is out, the scene can be examined. As the various people running stalls at the convention offer up their equipment to use. Some of these offers are taken up. The remains are so badly burnt that they look as if they burned for hours, even though it can have been no more than ten minutes. The body is also fused to the stairs and railing; the firemen had to put out an electrical fire. 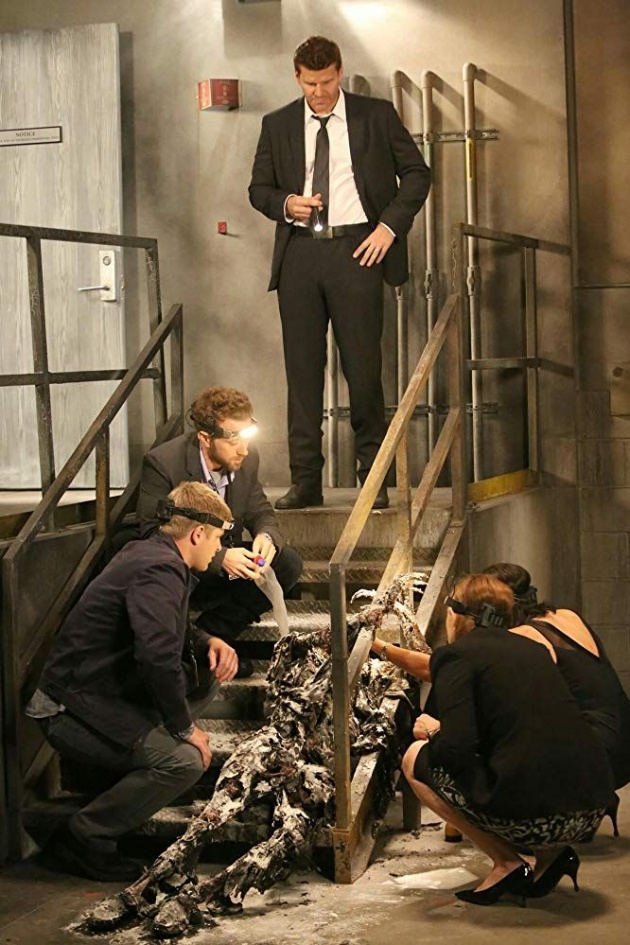 Wendell Bray is Back

Wendell Bray arrives; in "The High in the Low" he was using cannabis for medical reasons, to help with his cancer. Brennan got him on a trial, and his cancer is in remission. As Wendell hasn't used cannabis in a month, he's been cleared to work on criminal investigations. His hair has also grown back.

The victim, a woman, has a convention ID. It comes as no great surprise to discover that she's the woman that Hodgins was arguing with, Dr. Saunders. Hodgins says that, in college, he designed an odour recognition system. Saunders stole his design and made $4 million from it. At the time, Hodgins was worth billions, but he's still not happy about it. Hodgins says that this is the third time he's been a murder suspect, and that maybe he should kill someone so as not to waste their time. A joke. Perhaps not the best type of joke in the circumstances.

The body has been covered in kitchen rubbish and one of the kitchen staff left early. He has a criminal record for robbery, assault and arson, the victim's wallet is in the kitchen trash, he has the money from it and his footprint was at the murder scene. He admits to finding the victim dead but didn't tell anyone because he knew he would be a suspect.That worked out well. Perhaps it would have been better if he hadn't stolen the wallet.

Saunders was killed by someone who clearly knew what they were doing, and then DNA evidence turns up linking Hodgins to the murder. Of course, he didn't do it; the murderer threw rubbish all over the scene to obfuscate the crime scene. However, the entire convention is filled with people who know what they are doing. So, many suspects, and Saunders was unpopular with more people than Hodgins.

Bones - The Corpse at the Convention Trailer