Bones - The Final Chapter: The Brain in the Bot 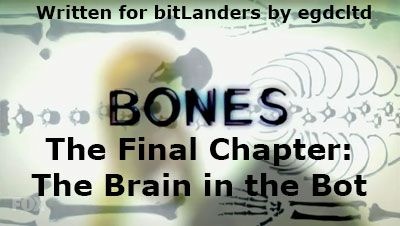 "The Final Chapter: The Brain in the Bot" is episode two of season twelve of Bones, the forensic drama television series loosely based on the novels and life of anthropologist Kathy Reichs. In this episode, the body of an AI pioneer with a tendency to annoy people is found.

Gone to the Dogs

The episode opens at the Virginia Regional Dog Show and a rather bossy woman arrives with her dog. A man asks her if she's seen Lady Carlisle; he apparently turned around for one second and his dog ran off. The woman, Patty, has also turned around and her dog, Gaston, has gone as well. The two go into the woods looking for their dogs and find them. Tucking into some human remains. By the looks of their coats, they are definitely no longer show ready.

Bones - The Final Chapter: The Brain in the Bot Promotional Photos

Brennan is Looking at Zack's File

Brennan is looking at a case file in the car and Booth asks how she already has a file given that they haven't reached the body yet. They aren't to do with this case, but with the murder of the lobbyist Zack seemed to admit to back in "The Pain in the Heart". Which, in the previous episode, "The Final Chapter: The Hope in the Horror", Zack admitted he didn't do. Zack had decided that he needed to be institutionalised because he believed he would have done it but, when Zack was unable to kill someone who was actually trying to kill him, he realised he wouldn't have murdered the lobbyist. So he asked Brennan to take another look at the case. Which she is doing but so far the evidence is inconclusive. 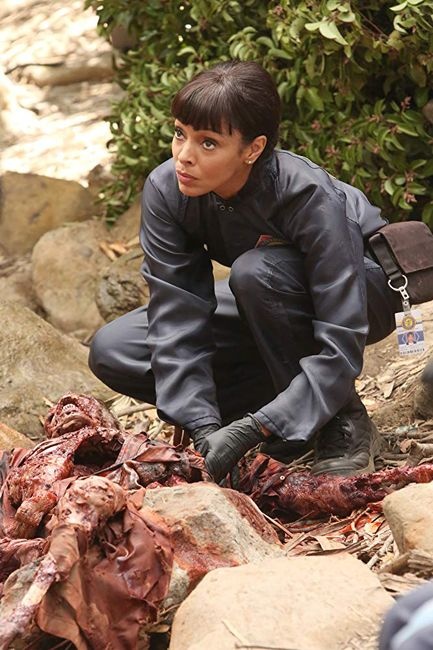 Brennan is Also Planning Her Own Surprise Birthday Party

Bones, you do realize you're not supposed to plan your own surprise party?

Brennan has more case files but these are for her surprise party. For her own birthday. She's planning her own surprise party. Brennan says that being surprised is unpleasant but planning parties is pleasurable. Booth comments that it's a big one, as Brennan is turning 40, and asks what she wants. Brennan says that she has everything she needs. So Booth suggests an experience, such as a concert. She tells him that the throat singers have already passed through town. Not the sort of concert Booth was thinking of. 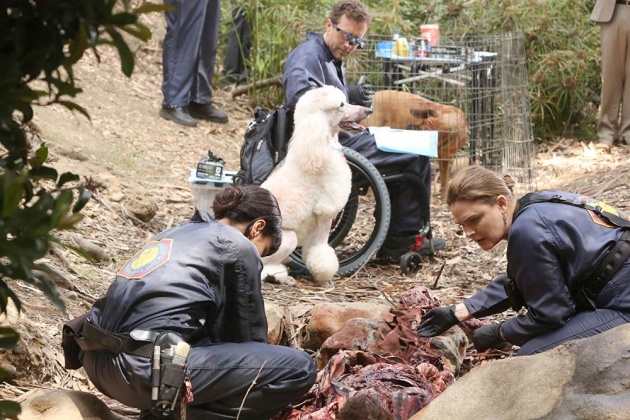 Hodgins is removing evidence from Gaston's coat; he says the dogs appear to have been rolling around in the remains. Brennan examines the body and states that other scavengers have been at it before the dogs. Cam says the dead man appears to have been dead for 3-4 days. There is also a piece of plastic fused to the victim's wrist, but no burn marks. Cam asks for a hint on the dress code to Brennan's surprise party; Brennan tells her that wearing clothes would be advisable. 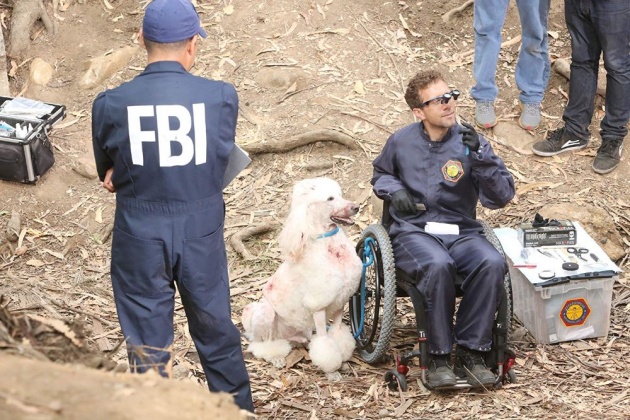 Booth, who has gone to look around, returns with a weed pipe. Hodgins says that if there is any in the pipe, he'll have it. To take back to the lab. Patty is not being patient with how long it is taking to remove the evidence from Gaston and says that, if his hair ends up stained pink, there will be trouble. Hodgins says he will expedite matters - and takes out some hair clippers. Patty is not pleased, rushes over and grabs them. In the resulting scuffle, Hodgins loses an eyebrow. 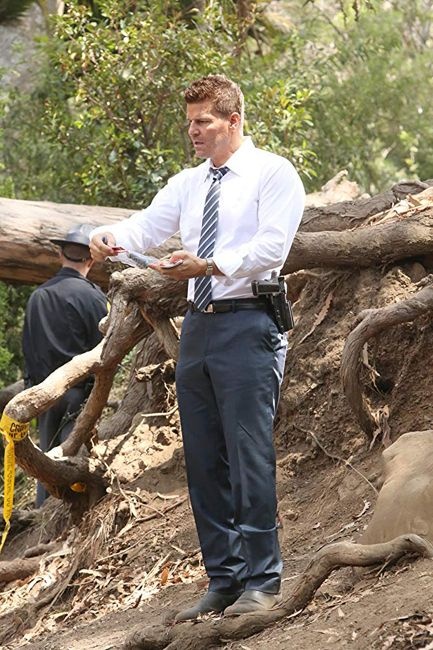 Daisy Has Put Brennan Down as a Reference

I think the NFL Daisy's referring to is the National Forensic Lab.

The victim has suffered from multiple instances of blunt force trauma, and Cam says that the flesh has been bruised, scraped or punctured. Daisy, who is now Dr. Wick having completed her PhD, has put Brennan down as a reference for the job of lead forensic anthropologist for the NFL. Not the sports one, as Angela thinks, but the National Forensic Lab. Brennan advises Daisy not to get her hopes up, given her age. Even though she's older than Brennan was when Brennan started working at the Jeffersonian.

Communing With Nature - With a Weed Pipe

When Hodgins arrives, sans right eyebrow, the four women have difficulty taking him seriously. He says that the weed pipe was last smoked around 80 hours ago, putting the smoker there at about the time of death. Aubrey finds the smoker, for his prints are in the system, a Randy Stringer, who seems a bit of an idiot. Stringer says there is no law about communing with nature but Aubrey tells him there is one related to dealing drugs. Stringer claims he saw someone with a flashlight enter the woods about 11:30 from the northwest, but he doesn't seem the most reliable witness. When Aubrey tells Stringer someone dumped a body, he comments about littering and how some people have no respect. 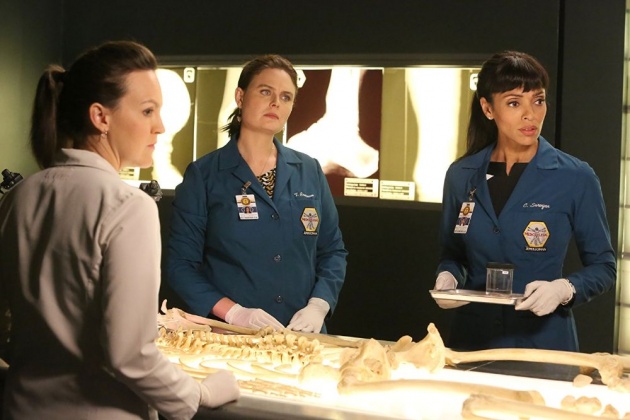 Angela hasn't needed to do a facial reconstruction for the plastic on the victim's wrist is a skin-mounted bioelectronics fitness monitor. Hodgins now has an eyebrow back, constructed out of his own beard hair. Brennan still has a problem taking him seriously. The monitors aren't available to the consumer yet, so it's presumed the user had connections. Angela, who has been ignoring unknown numbers finally answers and it's not what she expects. She has won a MacArthur Fellowship, called the genius grant. Hodgins is excited for her; Brennan seems jealous as she doesn't have one. The monitor belonged to an Ian Goldberg, an AI pioneer who makes robots that work with children on the autistic spectrum. 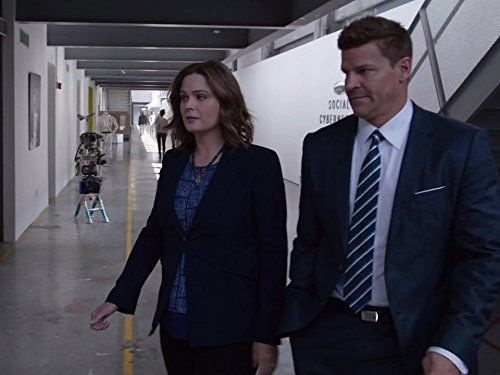 Humans Have a Soul; Robots Do Not

Booth and Brennan are heading to Goldberg's company, Social Cybernetics, when Daisy calls. It seems that Goldberg was punched in the back of the head prior to his death, which Booth says is a rookie move. The person who did the punching has probably damaged their hand. Booth also wants to know what sort of robots they are talking about, mentioning C-3PO and R2D2, a reference that Brennan does not get. He also says that humans have something robots do not; a soul. 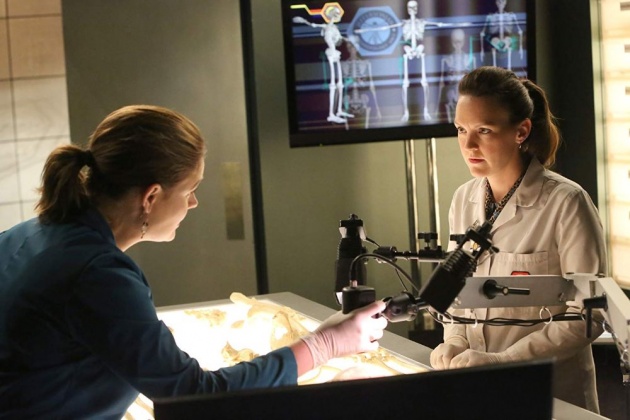 Booth! This is just as I suspected. His second and third metacarpal show significant angulation.

The robot in question is AMI - Advanced Modular Intelligence - and Goldberg's business partner, Kate Dalton, introduces them. AMI comments on how Booth, Brennan and Dalton look, and says that Dalton looks 100% nervous. She says that's because she's being questioned by the FBI. She automatically looks suspicious. Dalton says that if Goldberg hadn't died, they might have achieved the singularity within a decade. One of the programmers has a wrist brace on, which he claims is for carpal tunnel syndrome. It's not. It's for punching his boss. However, he claims he didn't commit the murder; instead they should look at the Stop the Robopocalypse nuts; Goldberg would go on their blogs and goad them into fights.

What About these Robopocalypse Nuts

The victim was hit by a bunch of different objects from multiple angles, mostly after his death. The coder, according to him, was working at his desk during the murder and Angela agrees with him. Aubrey finds AMI creepy and asks about the robopocalypse nuts. Not to join them as Angela suggests; their leader had hit Goldberg with a baseball bat. 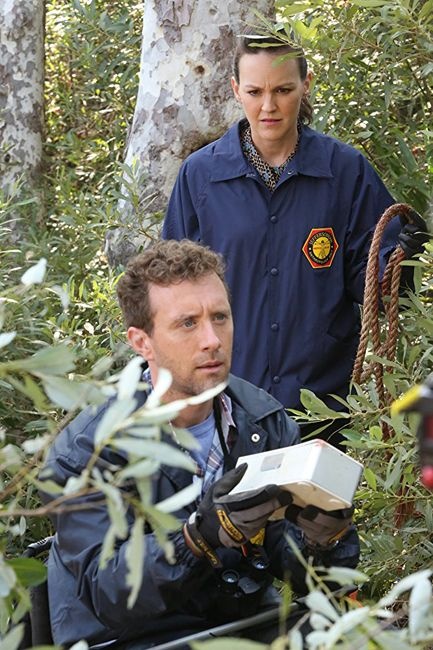 Time to Question the Robot

All my years on the job, and now I have to question this bucket of bolts.

Hodgins is working on a huge diorama of the murder area, and is making no sense of how Goldberg's body was dragged all through the woods. He wonders if it was to obscure evidence. It also looks as if someone with beyond human strength was responsible. So AMI is brought in for questioning. Booth is uncertain about questioning a robot; Brennan points out that AMI is more intelligent than the majority of subjects he has interrogated. Which Booth agrees with. AMI is also rather similar to Brennan when it comes to tact. AMI claims she is missing her memories from the day of the murder. Booth accuses the robot of lying. Brennan points out that robots are not capable of lying (yet); her memory was actually deleted. 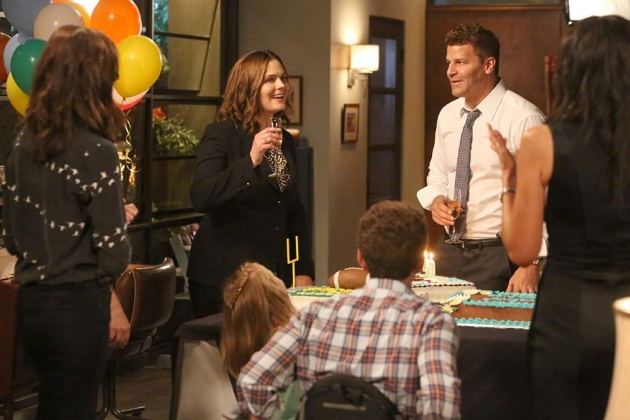 The investigation leads in an unusual direction. The robopocalypse guy seems to be worried about Terminators. Daisy is worrying about her job application and she's concerned about using Brennan as her reference, given Brennan's tendency to be blunt. Max looks to be keeping a secret. And Brennan's surprise party is definitely a surprise, as she has successfully managed to keep a couple of secrets.

Bones - The Final Chapter: The Brain in the Bot Trailer