Bones - The Final Chapter: The Hope in the Horror 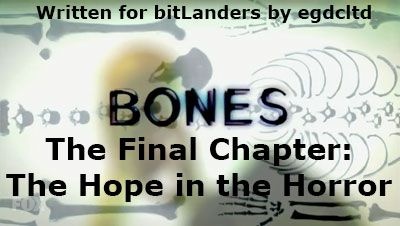 "The Final Chapter: The Hope in the Horror" is episode one of the twelfth and final season of Bones, the forensic drama television series loosely based on the novels and life of anthropologist Kathy Reichs. In this episode, Brennan and Zack are tarcked down, but is Zack really the Puppeteer?

Dr. Brennan, it is good to see you again. You and I... we have so much to talk about.

In the season eleven finale, "The Nightmare Within the Nightmare", the serial killer The Puppeteer had struck again, but this time it seemed clear that Brennan was the one he was truly interested in. Brennan had gone to a psychologist, Dr Faulk, to try and interpret what her nightmares were about, but Booth arrested him, suspecting that he was the real killer. Cam, Hodgins, Angela and Wendell were all at the Founding Fathers, having received an email from Brennan saying that she would meet them there. Only she didn't send it. Whilst on the phone, Brennan saw someone and thought she was hallucinating again. Whoever she saw abducted her. The others, with Brennan missing, put the clues together as to who The Puppeteer could be, and then who abducted Brennan was seen - Zack.

Only, if Zack is The Puppeteer, things don't make a lot of sense. The serial killer seems to have become fixated on Brennan once he saw her, yet Zack had known her for years. Zack had escaped from the secure psychiatric facility where he was sent after "The Pain in the Heart", as he was considered to be delusional as he killed someone on the Gormogon's behalf yet exhibited no remorse. The truth, which only the late Sweets knew because Zack admitted to him in "The Perfect Pieces in the Purple Pond" that he didn't actually commit the murder, he just made out that he did so he wouldn't get sent to a normal prison. 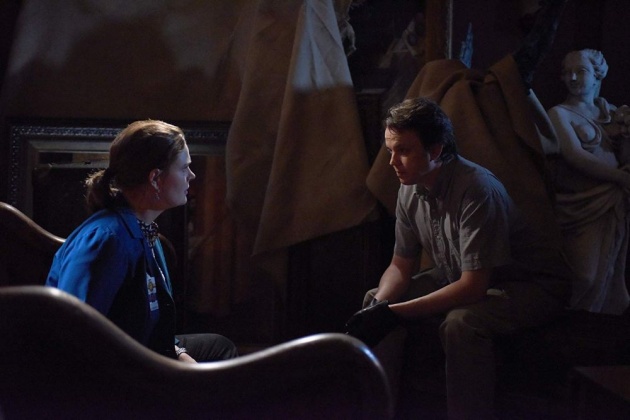 Zack Wants to Talk to Brennan

The episode opens with Brennan struggling to get up and Zack asks her to please not stand as the sedative he gave her has not completely worn off yet. Brennan asks what happened and Zack informs her that's she's been asleep for almost two hours. Brennan tells Zack to let her go because Booth will find her. Zack would prefer that Booth not be talked about.

How Has Zack Been?

Brennan asks what happened to Zack, and what happened to his head, for he has a scar across his forehead. Zack says he had forgotten that Brennan hadn't come to see him in some time. Brennan tells Zack that she can help him, that she and he can figure it out together. Zack tells Brennan that she may be used to her being his assistant but today the shoe is on the other foot.

Bones - The Final Chapter: The Hope in the Horror Promotional Photos 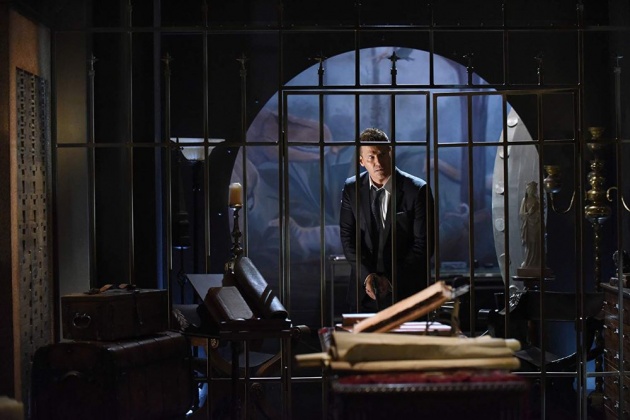 At the Jeffersonian Angela and Cam are going through the security footage. Angela says that Zack remotely turned off the cameras, giving him a clear path, but no exterior cameras were turned off, so Zack and Brennan could still be in the Jeffersonian.

Hodgins is Looking for Hand Lotion

Wendell brings Brennan's bag to Hodgins, who is looking for something in particular - hand lotion. The hand lotion contains glycerine so Hodgins is reprogramming the explosive trace detector. Normally, it screens glycerine out to prevent false positives - glycerine is a component in some explosives - but Hodgins is doing it the other way around so that they can track Brennan. 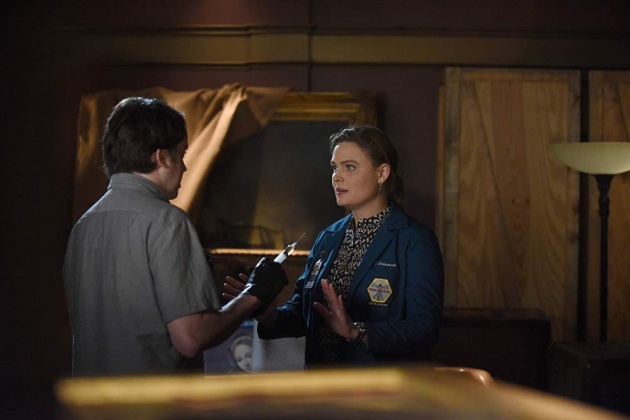 This leads to a lift which goes up and down. Hodgins suggests starting at the top but Booth presses down. He says that Zack will be in the basement. Booth follows the sound of voices and finds Zack and Brennan. Zack has a syringe and Booth points his gun at him. Zack asks for time to talk but Brennan stands between him and Booth, saying that Zack wasn't going to use the syringe on her. Zack agrees; the syringe contains sodium thiopental, which he calls truth serum. He was going to use it on himself to prove to Brennan that he didn't kill anyone.

Innocent people don't escape from sanitariums to proclaim their innocence.

Brennan Believes that Zack is Being Framed

Zack is arrested and taken away to the FBI, and Cam watches. Wendell comes out and asks if she's okay. She comments that you would never expect Zack to kill someone, because he looks as harmless as a child. That's what they thought last time. Brennan wants to go and see her kids and Booth is trying to get her to calm down. Booth tells her that Zack did it, but Brennan says that the evidence has been made to look like Zack is guilty. Booth points out that innocent people don't escape from sanatoriums to prove their innocence and Brennan agrees that it's completely illogical. Although perhaps it isn't illogical from Zack's perspective. Booth points out that Zack is a convicted murderer and that he kidnapped Brennan and wanted to kill her. Brennan says, if that's the case, why didn't he kill her, as he could have done it at any time.

Hodgins has the needle that Zack had and he's more than a little angry with Zack, wanting to use the syringe on him in a rather creative manner. Wendell, who never knew Zack, asks if there's a possibility he could be innocent and telling the truth; Hodgins says that he isn't. 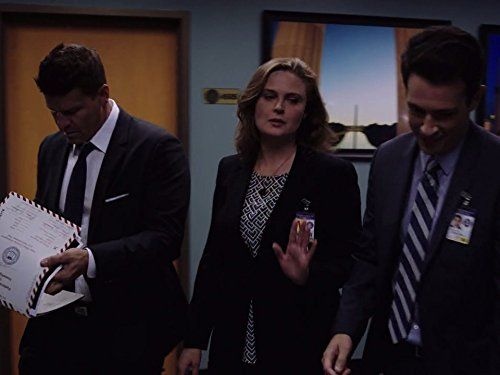 Never Had So Many Hugs; Brennan Thinks She Should be Kidnapped More Often

At the FBI, Aubrey hugs Brennan as he's glad she's okay. She says that she has had so much hugging that perhaps she should be kidnapped more often. Both Aubrey and Booth say no to that idea. Dr. Mihir Roshan, the head of the facility holding Zack, has brought in Zack's personal effects. He has no idea how Zack escaped. When asked about the scar on Zack's forehead, Dr Roshan says it isn't surgical in nature. Zack had been getting regular visits from Sweets and, when Sweets was murdered, Zack had trouble processing it. In a fit of rage he self-injured and afterwards was different, more withdrawn. 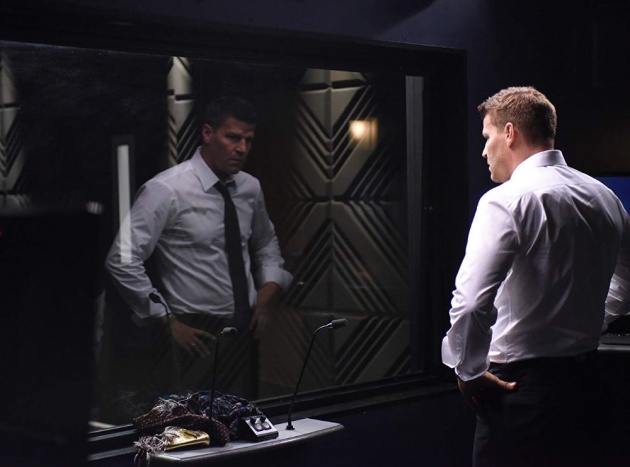 No! I would prefer to only speak with Dr. Brennan. Communicating with someone of lesser intellect is difficult for me

Zack Wants to Talk to Brennan

Aubrey interviews Zack who says he wants to speak to Dr Brennan because communicating with someone of lesser intellect is difficult for him. Zack considers his escape and Brennan's kidnap to be necessary evils for her life is in danger. Aubrey wants to know how Zack found out about the killer, because there was nothing in the press. Zack tells Aubrey that he was reading Brennan's emails and knew it was only a matter of time before he was considered the prime suspect. Zack had been allowing himself time out of the facility at night when he would break into a library and keep up with his friends and colleagues. When asked why one of those wasn't Booth, Zack says they are not friends. So Aubrey asks how Zack feels about Brennan marrying Booth and having two children with him. Not good might be the unspoken answer.

Angela is going through the library computer that Zack was using. There are lots of folders, one of which is untitled. In that folder are emails from Dr Alexander Bancroft. Cam wants to know why that name sounds familiar. Angela finds Hodgins as they are looking through the stuff from the Puppeteer's basement and tells him that Zack had set up a dummy account. Bancroft is supposedly a neurosurgeon, the one the physiotherapist working on Hodgins has been speaking to and who developed the protocol being used on Hodgins. Only it was Zack who developed it. 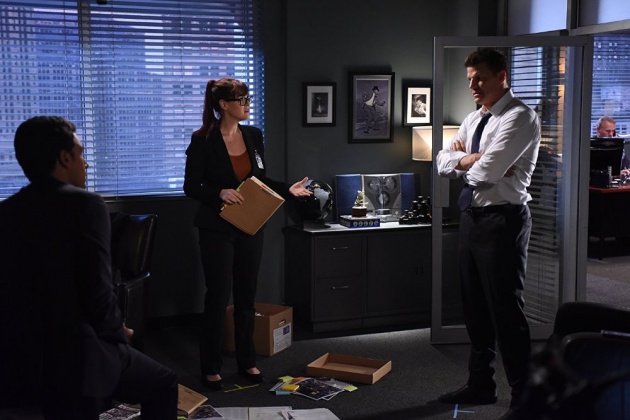 The Return of Karen Delfs

At the FBI, Booth is saying to Aubrey that they need to see if a profiler is free. Karen Delfs, who had gone to Kansas City in "The Fight in the Fixer", has returned and she volunteers. She suggests that perhaps Zack is suffering from dissociative identity disorder, and that he is killing people with another personality. 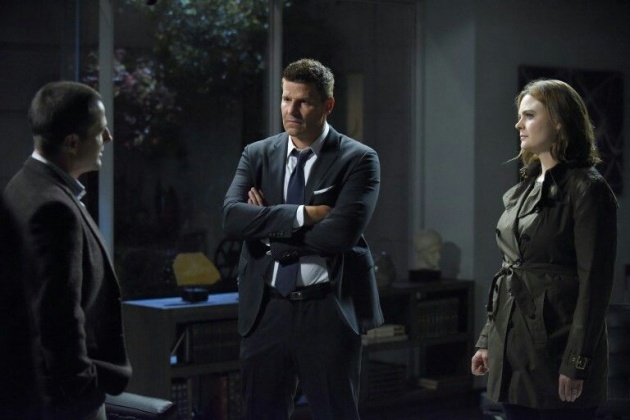 Who is The Puppeteer?

Booth still hasn't ruled out Dr Faulk who, when Booth and Brennan go to see him, acts in a very creepy way. Delfs reason for leaving Kansas City is being kept secret as well, and she, too, starts behaving oddly. So, is Zack guilty? Given he never actually killed the lobbyist, that's a point in his favour, but if he has got a separate personality, that one could be killing. Another victim turns up as well, and this one dates back much, much further than the other three.

And he's missing the entire lower half of his body.

I'm just saying, in case you missed that little detail. 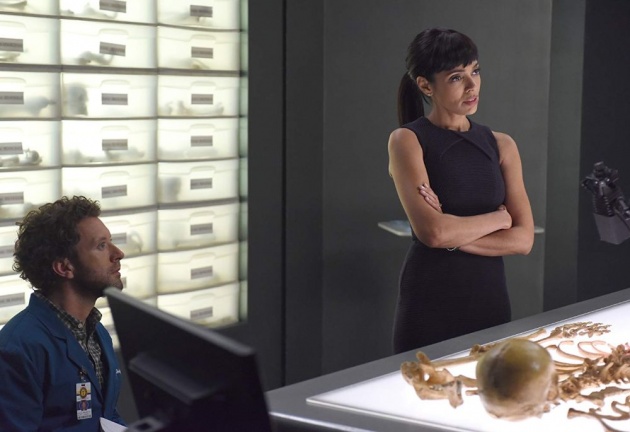 Bones - The Final Chapter: The Hope in the Horror Preview