Bones - The Final Chapter: The New Tricks in the Old Dogs 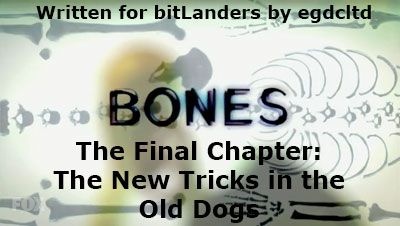 "The Final Chapter: The New Tricks in the Old Dogs" is episode three of season twelve of Bones, the forensic drama television series loosely based on the novels and life of anthropologist Kathy Reichs. In this episode, a dead body in a giant carbon snake leads to a missing senior citizen.

The episode opens at night and three figures in black with torches climb a fence to the sound of dramatic music. Music that it so dramatic that it seems highly likely there is going to be something off here. The three, who are wearing goggles, approach a depression in which there are a number of oil barrels. Then one of the three takes off his hood to have a puff on his inhaler. He, and the other two, are kids. One, Kyle, tells the boy with the inhaler, Evan, that they need to be cool. The girl, Claire, points out that they are there to conduct experiments, so cool doesn't seem in it.

Bones - The Final Chapter: The New Tricks in the Old Dogs Promotional Photos

The Skull in the Barrel

Evan and Claire find a barrel with a loose lid and they start pouring a white powder into it. Kyle says that with baking soda and acid they are talking the biggest instant volcano. The other two laugh at him; Claire says that for a volcano the acid needs to be hydrochloric and this is sulphuric. Evan isn't pouring in baking soda either, but sugar. Kyle asks what they get by combining the two and the barrel starts rattling then falls over and a big black cylinder starts extruding. Claire tells Kyle that it's the biggest black snake firework. Then Kyle sees a skull in it and screams; Claire just says that it is awesome. 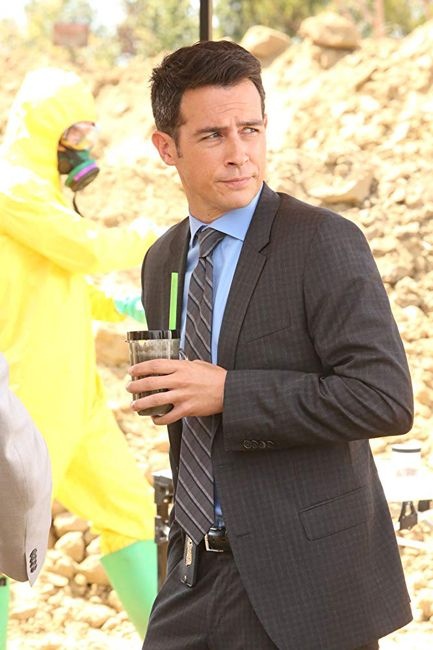 Hers! Sorry, but in this instance I'm ho's before bro's.

Brennan tells Booth she doesn't want to argue with him. He says that 7th graders playing with a barrel of acid is not the best idea. Brennan disagrees; she says they took the proper safety precautions and she congratulates enquiring minds. Aubrey says that the kids stopped the body from being completely dissolved in the acid and sides with Brennan - in a way that probably sounded a whole lot better in his head. Brennan says the real criminals are the chemical company that illegally disposed of toxic waste. Aubrey is also drinking something odd, for him, a kale smoothie. He's decided to cut down on junk food for a bit. 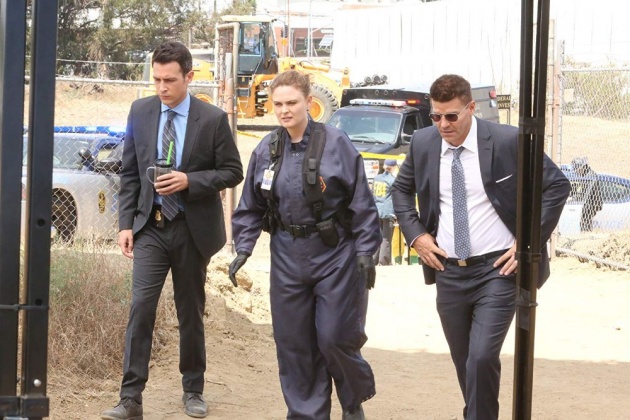 The Chemical Company's Lawyer is Not Happy

At the scene Brennan tells Booth that science is cool but Cam tells her she needs to work on her delivery. A man turns up and insists that they remove all the people in hazmat suits. He's the chemical company's lawyer and he says that the presence is prejudicial to his clients. He also doesn't like the decontamination foam, claiming that it misrepresents that the chemicals are dangerous. Brennan tells him they are dangerous; sulphuric acid could eat through the lawyer's flesh in seconds. He tells her that's her opinion; Cam informs the lawyer that no, it's fact and the reason the only thing she has to work with is a clump of grey hair. 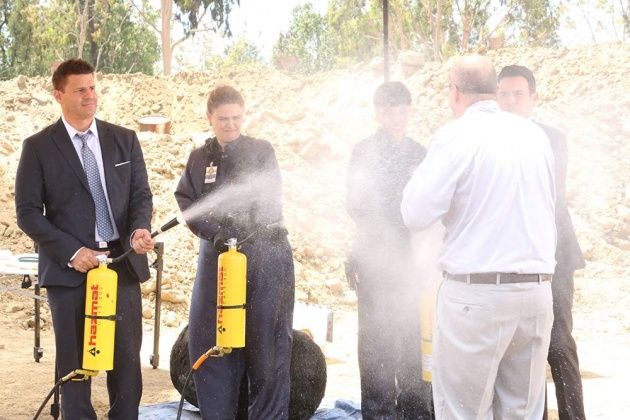 There's a suggestion that perhaps the victim is one of the plaintiffs who are suing the chemical company. Brennan asks where Hodgins is and Cam tells her he suffered a wheelchair accident. When the press arrive the lawyer insists that they get everyone out of there - then gets some of Aubrey's smoothie over his jacket. Which he thinks is acid and starts screaming about acid being pure toxic hell. Clearly he was lying earlier, not simply stupid. So they douse him in decontamination foam. 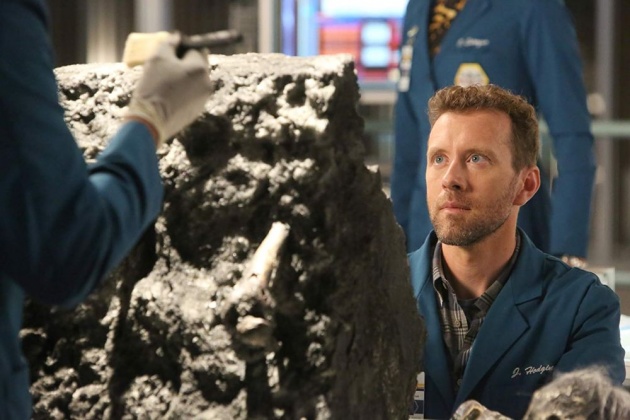 Hodgins Always Wanted to Go In a Carbon Snake

Cam arrives at the lab and sees Hodgins. She asks if he is okay and he says never better. In fact he seems very cheerful. Hodgins is also excited about the experiment and asks how long the carbon snake was. When he's told 12', he says lucky SOB. It seems that Hodgins always wanted to go out in a carbon snake.

Brennan Knows Who Iron Maiden Are

You know who Iron Maiden is? You, who thinks Maroon 5 is a color palette?

Angela is doing the photo reconstruction and she apologises to Brennan that it isn't a good picture. Brennan comments that it reminds her of Eddie. The Iron Maiden mascot. Which causes Angela to question Brennan, who then explains who Iron Maiden are. What Angela was questioning was Brennan's knowledge of Iron Maiden. Brennan says she has long been fascinated with black and heavy metal music, ever since "Mayhem on the Cross".

Brennan examines the reconstruction and tells Angela there is something wrong. She then adds dentures and hair to the victim. Brennan inquires about the wheelchair accident and Angela says that the wheel just popped off the axle. Just one of those things. However, Brennan can work out just what Angela and Hodgins were doing on the wheelchair to result in a wheel popping off. Which leads to a discussion about having more children. The victim is also identified as James Felbeck, 86, for whom a silver alert has been issues. Felbeck was last seen at his retirement home.

I'm a sniper, you hear me? And snipers they do not fire blanks.

And in that analogy, my ovaries are what? Target practice?

The Old Are Perfectly Capable of Killing

Brennan tells Booth that the FBI has very little on Felbeck. He says that probably means he was a pretty decent guy. Brennan also comments that Felbeck had no family or children. Which brings up the topic of children again. Booth says that their family is perfect and Brennan agrees. Which is why she wants Booth to get a vasectomy. Booth is not happy with that idea. To change the subject he talks about the killer, saying it must be one of the staff. Brennan disagrees and accuses Booth of ageism for suggesting the elderly are less capable of killing. 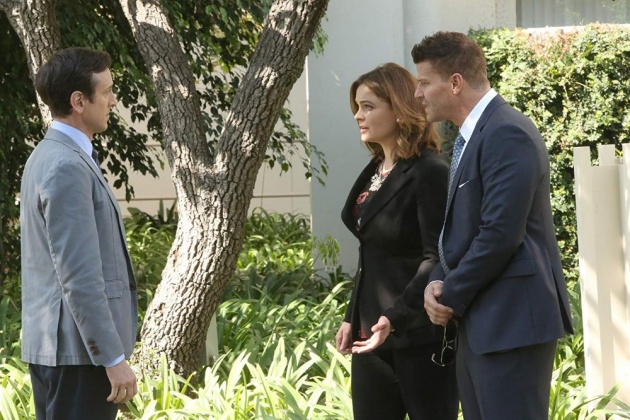 At the facility, one of the residents pinches Booth. She asks if they can blame her; Brennan says she cannot. The man in charge, Francis, is rather nervous. He says it's because of the death. Brennan tells him he should be used to the idea, as he's surrounded by death. It's inevitable - and, in Brennan's opinion about a passing resident, imminent. In order to get Brennan to stop being tactless in front of the residents, Booth suggests they take the conversation elsewhere and Francis happily agrees.

At the Jeffersonian, Arastoo is examining the body in the snake and says it's an amazing experiment. Hodgins agrees and says that when he gets home he and Michael Vincent are recreating it - only much bigger. Hodgins points out that Arastoo has a wedding soon and brings up the matter of kids (a theme for this episode) at which point Cam arrives. Hodgins has determined how long the victim had been in the acid, thanks to research carried out by John George Haigh. Aka the Acid Bath Murderer. Haigh had discovered that it took 48 hours to dissolve a body enough to pour it down the drain without clogging the pipes. So Felbeck was in the acid for 18-24 hours. prior to the sugar being added. 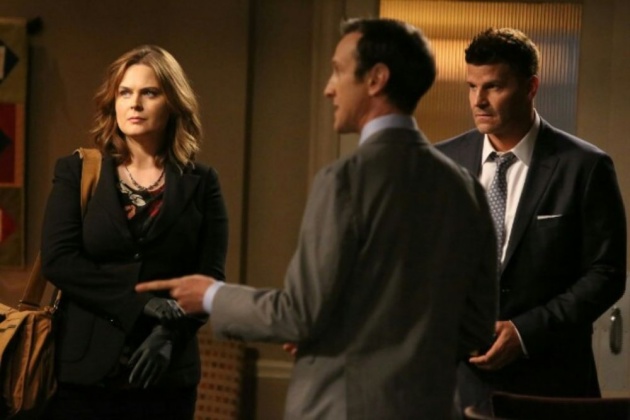 An Active Social Life for the Deceased 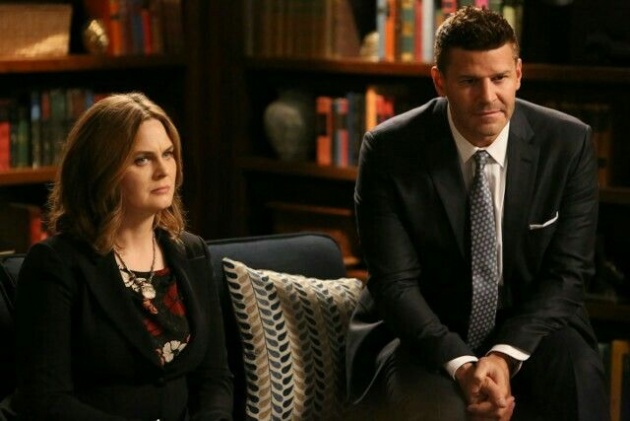 Something Secret on the Computers

The hair on the victim wasn't his, but from a variety of comfort dogs. Which are used in the residential facility. The victim had been taking a treatment for osteoporosis, successfully too, which would suggest that another resident would be incapable of killing him, as he died from a broken neck. As well as being hit with a metal walking stick. According to one of the orderlies, a big guy called Sam Wadkins, Felbeck had spent a lot of time researching something on the computers. Something he was keeping secret.

What's the Internet For?

The computers are brought in and it seems the facility's residents are not quite as retiring as might be thought. Angela discovers that age doesn't stop men from looking up certain things online. So, Felbeck was doing research into something online. Was this what got him killed?

Bones - The Final Chapter: The New Tricks in the Old Dogs Trailer