Bones - The Final Chapter: The Tutor in the Tussle 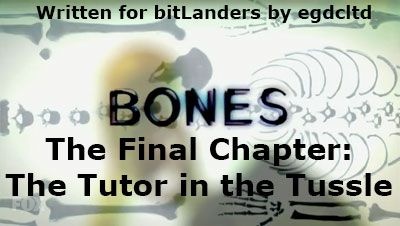 "The Final Chapter: The Tutor in the Tussle" is episode five of season twelve of Bones, the forensic drama television series loosely based on the novels and life of anthropologist Kathy Reichs. In this episode, the body of a part-time tutor is found pulverised by a shotgun.

A Dead Body on the Corner of Boner Street

The episode opens with a boy pushing a shopping trolley up to a street sign. He starts removing the sign - which reads 'Boner St.' - when a cop spots him and gives chase. The boy runs into an abandoned lot and stumbles over something. The something is a dead body. The boy leaves and the cop calls it in. Eventually having to give the name of the street.

Booth says that it's juvenile, stealing the sign, but Brennan thinks it's hilarious. Because that part of the body has no skeletal material in it. Booth believes she's over thinking it. So puts on an audio tape. Which is clearly Brennan's book, but she says that the narrator is doing a terrible job because he misses the nuances of the main characters. Booth tells her to let the publisher do their job; what's she going to do, narrate her own book? The answer is yes.

Bones - The Final Chapter: The Tutor in the Tussle Promotional Photos

Let the Right People Do their Jobs

At the scene, Cam is examining the body and there are shotgun shells everywhere. The killer stood over the body and fired several times at close range, spattering bones and tissue over a wide radius. Booth asks for a time of death and Brennan replies that it's impossible to determine from osteological evidence. Booth was asking Cam - who says two days. Booth comments that's what happens when you let the right people do their job. The victim's skull and hands have been badly damaged by the shotgun.

Can Anyone Recommend a Good Dry Cleaner?

Aubrey has found nothing on his canvas then leans on a tree, as the others were going to tell him not to. A piece of flesh falls out of the tree and lands on his jacket. Aubrey asks if anyone can recommend a good dry cleaner; Booth, Brennan and Cam all can. Once his jacket is removed, Aubrey comments that one is probably enough. Then more tissue lands on him, this time on his shirt. So he suggests the others just send him their recommends. 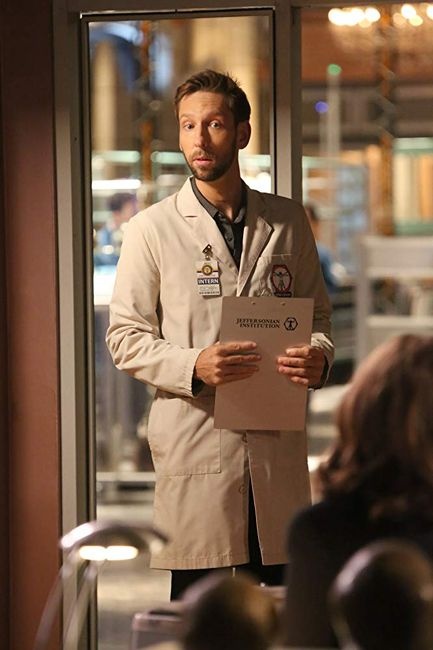 Dr Fisher is back at the Jeffersonian (what happened to his job at the White House, where he was revealed to be working in "The Secret in the Service"? It's not mentioned) and comments that the victim had bad knees indicating thousands of hours on manual labour. Hodgins asks if it's true that Brennan is narrating her own book. Angela asks how Agent Andy was brought back, because Brennan had killed him off in "The Carpals in the Coy-Wolves". Hodgins says that Fisher can tell them if the science is accurate. Fisher replies that he doesn't read Brennan's books; he considers them low brow. Instead he reads nihilist material. Which includes Garfield. Yes, that Garfield. Angela says that it will be difficult to get an ID but Cam finds a contact lens. If the victim's fingerprint is on it, they will be able to ID him.

Aubrey is getting coffee and talking to Karen Delfs. The victim is an Austin Wilson, who has a criminal record. As they leave, Karen bumps into a man who is entering. Aubrey looks stunned. Karen leaves them alone after the man greets Aubrey. It's his missing father. Aubrey is going to arrest his father, but the latter says he can't, because they need to talk. 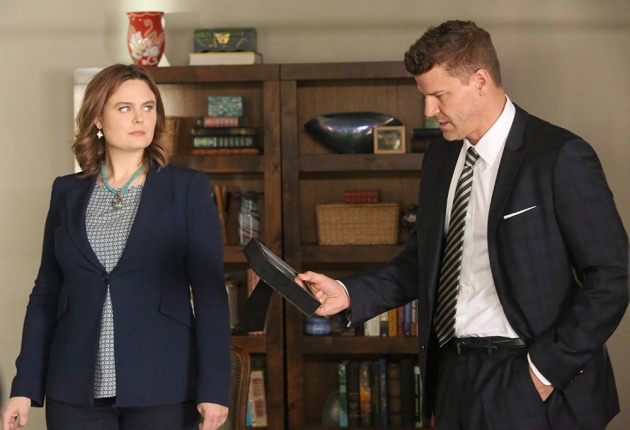 Assaulted a Cop with a Soda Bottle

Austin's roommate Ben tells Booth and Brennan that Austin wasn't a criminal. People thinks they are gangsters because they came up in the system. Austin's criminal record shows he assaulted a cop; Benny says that was a misunderstanding. They were two kids in high school riding bikes and spraying people with soda bottles, but Austin was unlucky and sprayed an off duty cop.

Austin worked in construction, but had another job as well. He was working to get into Princeton. When Booth comments on this, Benny asks if they think a foster kid can't go to good schools. Brennan of course doesn't. Austin worked tutoring to help pay for med school; he had no life and no girl. All he did was work and study. Brennan thinks Austin's work ethic was admirable. 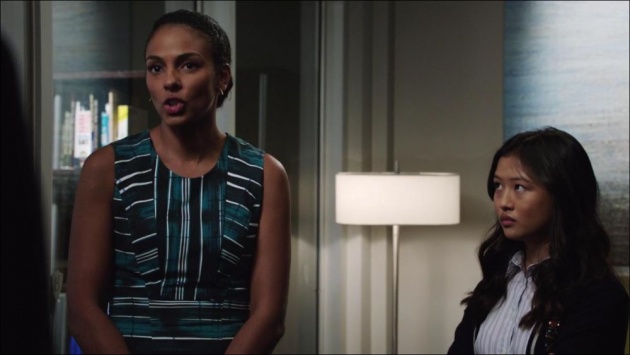 Austin tutored at the Bryan Achievement Academy. His boss says that he had no problems with anyone, but one of the students suggests Psycho Sue. She's the parent of one of the students, and the girl says that Sue Casey tried to run her over with her SUV after she beat her son in a test. And she was yelling at Austin in the parking lot, then slapped him. Ms Bryan says Sue is harmless; the student says that's because she's scared of her after she threatened to rip out her intestines. Ms Bryan says those were not the exact words; the student agrees. She says the actual ones were way worse. 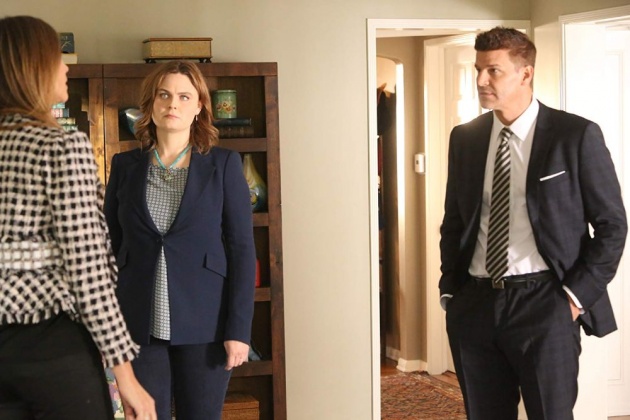 Cam is examining the shotguns when Hodgins enters. She plans to test them but Hodgins replies that they aren't the murder weapon. Then starts pulling something out of the barrels. Cam asks what it is and Hodgins gives them their proper name. Then explains they are spiders. Cam really doesn't like spiders. Some get loose in Cam's office without her noticing. She will not be happy when she does. 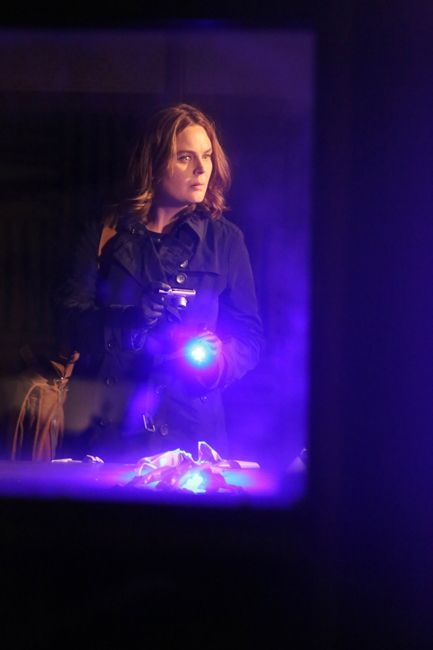 Austin Was Very Popular - With the Mothers

Austin was very popular and was getting new clients every week. Many were previously with another tutor, Matt Bogdan. Bogdan tells them that he was actually a better tutor than Austin, and couldn't see why parents preferred him. Well, it looks as if the mothers actually preferred him; Angela points out that Austin was way better looking.

The cause of death needs determining, and Austin had blunt force trauma all over his body. The obvious motive for death is because a husband caught Austin sleeping with his wife, and there appears to be evidence agreeing with this. Only it's perhaps too obvious. 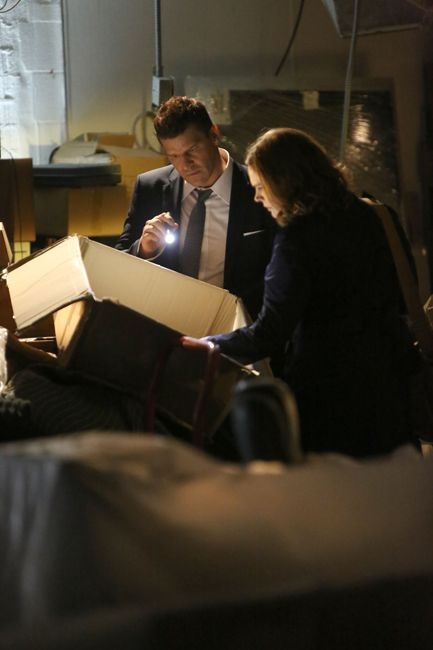 Aubrey is Off His Food

Aubrey's father had told him he needed money to support his new wife and child. Austin doesn't know whether to believe him. He says everything his father utters is a lie designed to manipulate people. Aubrey doesn't even know whether the son is real. The matter puts Aubrey off his food - which is noticeable.

Brennan's Narration is an Excellent-Quality Recording

Cam's revenge on Hodgins for the spiders is both subtle and nasty. Fisher may not be as disinterested in Brennan's books as he makes out. Brennan's publisher tells her she needs to audition to become the narrator. So she narrates a demo tape. Aubrey comments that the recording quality is excellent. Which is a nice way of saying she's terrible.

Bones - The Final Chapter: The Tutor in the Tussle Trailer