Bones - The Geek in the Guck 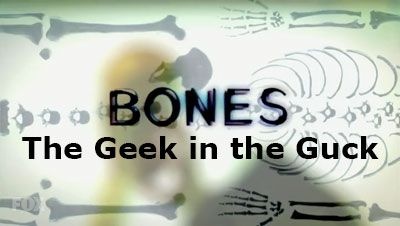 "The Geek in the Guck" is episode four of season ten of Bones, the forensic drama television series loosely based on the novels and life of anthropologist Kathy Reichs. In this episode, the body of a rich video game designer is found in a river.

What's the Internet For?

Christine Wants to Learn to be Chinese

Brennan and Booth are eating breakfast with Christine. Booth is trying to get Christine to eat her breakfast so that she grows up big and strong. Christine replies that Brennan says size is genetic. So Brennan says a bunch of stuff that pretty much goes over Booth's head - but it works. Brennan is also looking into kindergarten for Christine, and she's going really deeply into it, having researched many. Booth suggests the public school down the road, but Brennan says it has a 14:1 student to teacher ratio, which she feels is far too high. Brennan then gets a call about a body and is going, as Booth asks Christine what she wants. Which is to learn to be Chinese. A matter Brennan leaves Booth to deal with.

Ms. Warren is Going by Her Gut

The body is that of a white male in his twenties; Jessica Warren, whose turn it is as intern, says that she feels that it was a revenge killing. Brennan says that, in her lab, things are based on evidence, not intuition. Jessica had a gut feeling that Brennan would say that.

The body had been in the river for three and a half days, and Cam wants to know who would cut out the eyes, ears and lips. Not a who, but a what; Hodgins says the eastern snapping turtle finds those to be delicacies. Jessica is also getting a lot of text messages; she says that there's a lot of drama at home, as all 19 people who live there are freaking out.

No Room for Guts in the Lab

The arms are missing, possibly torn off due to weights being tied to them for a body dump. Hodgins brings up Jessica's home life again; she says she grew up in an educational cooperative, with 27 people including parents. Booth video calls and says the killing might be gang related. The victim also looks to have taken a beating. Jessica and Booth bond over both believing in their guts and Brennan says that there is no room for guts in her lab. Just as Cam is holding a handful of them.

A Gang Killing is Unlikely; Gangbangers Are Too Lazy to Travel the Distance Needed

Aubrey, after the previous episode, "The Purging in the Pundit", is now working with Booth, says that the only gang activity is 15 miles downstream from where the body was found. Which makes a gang killing unlikely, given the distance needed to travel. The victim was also wearing pretty cheap clothing. Booth also raises the matter of education with Aubrey.

Brennan Does Not Think Highly of the Theories Behind Ms. Warren's Cooperative

Brennan knows of the person who set up Jessica's cooperative, Professor McLaughlin. She doesn't seem to think highly of his theories, but Jessica says she is one of the least accomplished people there. Which suggests that the methods worked. However, McLaughlin is leaving - he's retiring - so the co-op is splitting up. 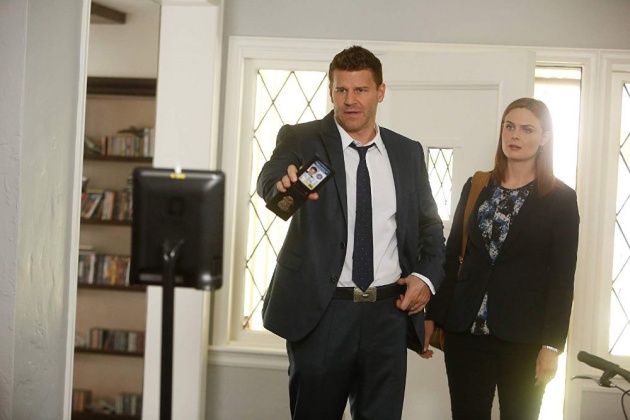 When Angela does the facial reconstruction and finds a match in missing persons, Hodgins recognises the man as Hayes Robertson, a very rich video game designer. Robertson also had a roommate, Noah Gummersall, who Brennan and Booth go to visit. To be greeted by a virtual presence device. According to Noah, he and Hayes had been best friends since kindergarten. At which point Brennan inquires as to which kindergarten it was. A little off topic. Noah's job is a video game tester for Hayes, and had a joint cheque account with his friend, which is how he got paid. 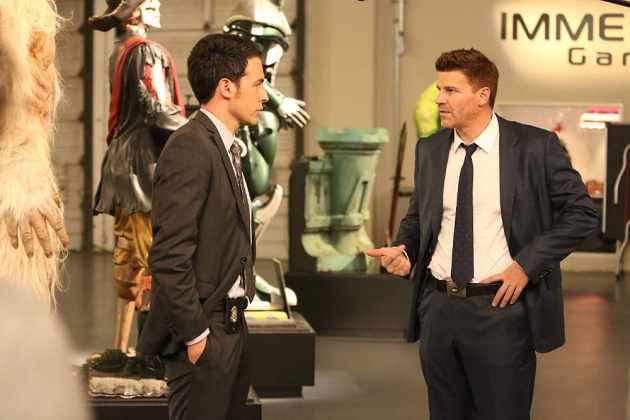 When Aubrey and Booth got to Immersion Games where Hayes was the number one programmer, Aubrey totally geeks out and takes a selfie with a life size video game monster model. Hayes had apparently got into an argument with the CFO, Jen Park, regarding an upcoming game release, whose delay would have cost the company $20 million. The number two programmer, Anne Schamberg, is cooperative; the CFO rather less so. 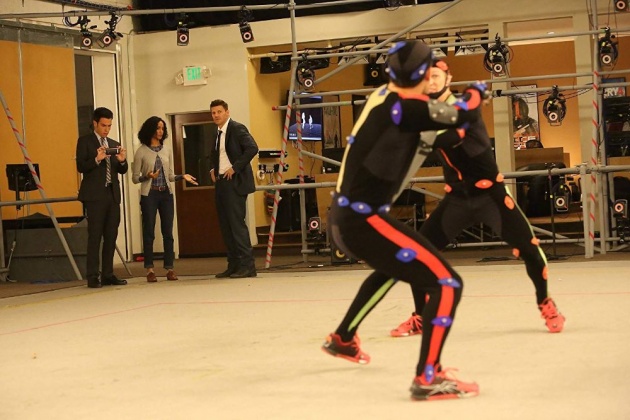 Dropped From a Bridge

Cause of death is proving hard to pin down but it looks as if Hayes' body was dropped into the river from a significant height. Probably from a bridge. Find the bridge, and the arms will probably be found as well. Matters also take a bit of an unexpected turn.

Bones - The Geek in the Guck Trailer