Bones - The High Treason in the Holiday Season 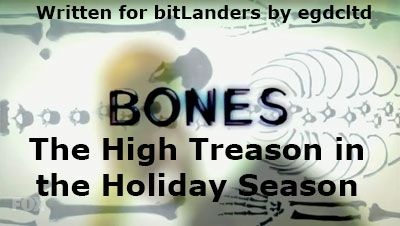 "The High Treason in the Holiday Season" is episode eight of season eleven of Bones, the forensic drama television series loosely based on the novels and life of anthropologist Kathy Reichs. In this episode, a reporter known for exposing the NSA's actions turns up dead.

Brennan is Keeping Something Secret from Booth

Brennan is on the phone pulling out holiday decorations and saying to the person on the other end that she doesn't want him to know. When Brennan sees Booth, she changes what she is saying and quickly ends the conversation. Booth asks who Brennan was talking to and she clearly doesn't tell the truth - Booth points out that she's not very good at lying. So Brennan replies that she's thinking about not having a turkey at Thanksgiving. There's only going to be four of them and Booth is the only one who eats it. Booth tells Brennan that you can't not have a turkey at Thanksgiving; you can't cut out the main course the holiday is built around. Brennan tells Booth that Max and Russ are away, and that there will be no-one to eat it all. Booth's solution to this is to invite Aubrey. Then he suggests Angela, Hodgins and anyone else, simply that he can eat turkey. Brennan agrees as long as he is the one who cooks the dead bird. All this was an attempt to distract Booth from the phone conversation, and Booth knows this as well. So he brings it up again. Fortunately for Brennan, she gets a message regarding a dead body. 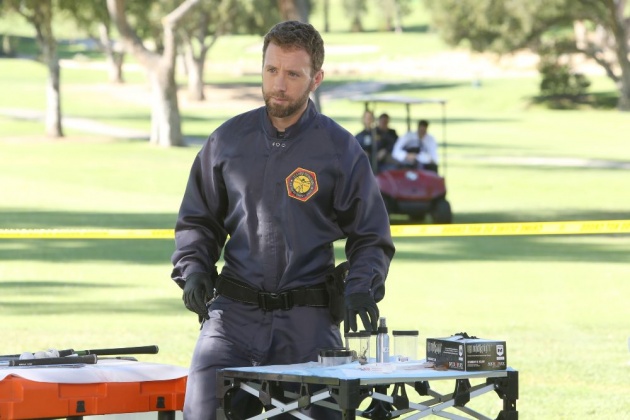 Brennan and Booth are on a golf course in a golf cart, presumably heading for the crime scene. They are talking about the course, which is a very exclusive one. Aubrey asks if he's allowed to speak, and Brennan tells him that caddy's typically don't. Booth's position on golf is it isn't a sport, because there is no defence. Brennan asserts that anything that she can beat Booth at he doesn't consider to be a sport. Aubrey wants to know how they got into such an exclusive course. Booth tells him that when you're married to a bestselling novelist, you can get in pretty much anywhere. Aubrey wants to know if this works if you're partner is married to a bestselling novelist. The answer is no. 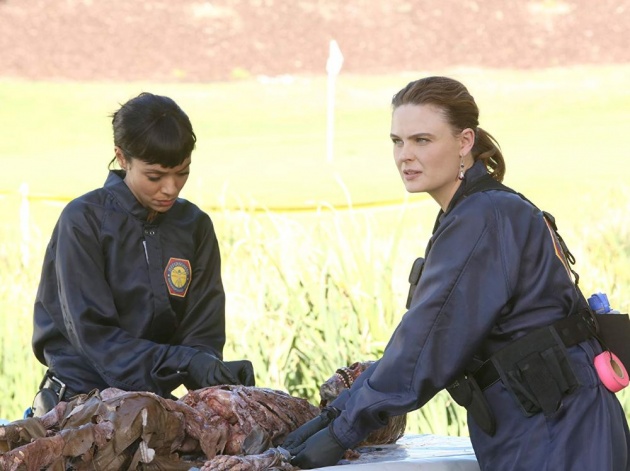 The body was found by some people who were trawling for golf balls in a water trap. Cam says that the time of death is around 2-3 weeks but can't be narrowed down any more. Hodgins says that he can narrow it down better - to 2 weeks, 4 days, 7 hours and 12 minutes. Aubrey wants to know what bug can be that precise. The answer is a wristwatch. The victim is female, 55-60 years old. Hodgins wonders if the victim was dumped at a high end golf course to send a message; however, golf courses are both empty and dark at night, so the person who dumped the body knew they had about 12 hours to work in. Booth also invites Aubrey to Thanksgiving and Brennan mentions that human and turkey tissue have a remarkably similar texture. Aubrey thinks that meat substitute sounds better after that comment.

Back at the Jeffersonian, Dr Fuentes says that he doesn't believe the victim played golf. When asked if he played, he tells them that Castro bulldozed every course. So, no. The victim shows signs of shrapnel, but she was in her 50s, and women didn't serve in combat roles 30 years ago. The stomach was also carved open to stop decomp gasses from causing it to float to the surface again.

Hodgins Recognises the Victim as a Political Reporter

The victim also had extensive plastic surgery, which alters Angela's facial reconstruction. When Hodgins enters to say that the murder weapon was platinum sterling silver - which is 95.5% silver, and very expensive - he recognises the face as Vivian Prince. Hodgins says that she's the finest political reporter in the country and she recently broke a story about the NSA spying on American citizens, world leaders and running a hit squad. Which would be motive.

Booth is Not Happy with Some of the Victim's Actions

Aubrey and Booth head to the paper where Vivian worked. Booth is really not happy that she outed operatives, putting them in danger. Aubrey replies that, if the NSA was breaking the law, shouldn't something be done? Booth tells him that, in such a case, you go after the people in charge, not the operatives. Normally the ex-husband - whose career is not as high-flying as Vivian's - would be the primary suspect, but in this case Aubrey thinks that the NSA is a better suspect. Which Booth does agree with.

No-one Reads the Paper Any More

At the paper, Booth comments on the place being quiet. Aubrey tells him that's because no-one reads the paper any more. Booth explains why he does, and tells Aubrey he doesn't get it. Aubrey replies he does get it - Booth's old. The editor asks if they are there about the threats, but is informed that Vivian is dead. The editor dismisses the threats as being from crackpots, but does offer up an alternative. Three weeks ago, Vivian broke the story about the NSA hit squad, so points them in that direction. He doesn't know Vivian's NSA source - called the American. He also takes time out to set up the story of Vivian's death; if he doesn't break the story about the death of his own reporter, he will lose his job. The person delegated to is Kate Kolfax, younger and prettier than Vivian, and Booth understands why the dead woman had so much plastic surgery done with a younger model waiting in the wings. The editor says that her pic on the blog draws in traffic.

A Mr Gill from the NSA arrives at the Jeffersonian and tells Cam that he is going to be supervising the investigation. Cam tells him goodbye. She may feel that exposing covert operatives was treason, but she isn't going to hand over anything to the NSA without a court order.

The NSA Claim if they Had Killed the Victim, the Body Wouldn't Have Been Found

The head of the NSA front, Graystream Solutions, that is supposed to be a hit squad, Cooper Blackthorne, does come in to the FBI. Purely as a courtesy. So Brennan comes straight out and asks him if he killed Vivian. He says that he didn't and, purely hypothetically, if his organisation was as skilled as Vivian made out, they would have never found the body. Which is a good argument. 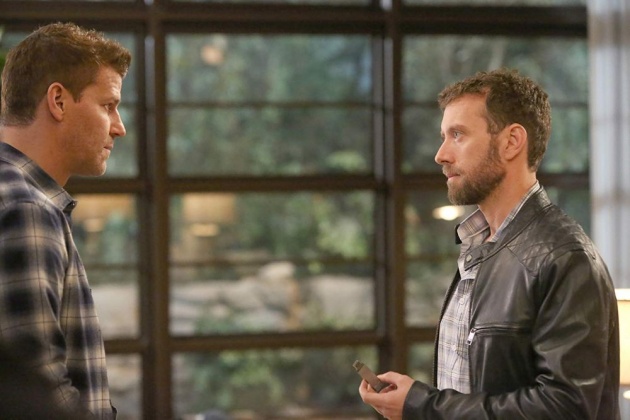 So, there are people who wanted Vivian dead, but the death doesn't look entirely professional. There are also discussions as to what is and is not treason - Booth has strong feelings on the subject and doesn't like the example Brennan gives him of a traitor who was judged differently by history. George Washington. Everything that Brennan says is true as well. So, if a covert operation is breaking the laws of its own country, what should be done about it? Always a problem.

Bones - The High Treason in the Holiday Season Trailer