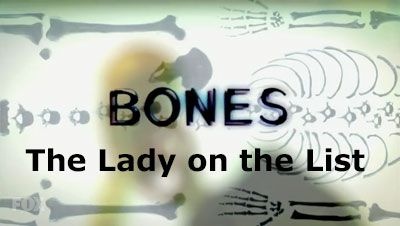 "The Lady on the List" is episode five of season nine of Bones, the forensic drama television series loosely based on the novels and life of anthropologist Kathy Reichs. In this episode, the body of a man with terminal cancer is found on a cliff. 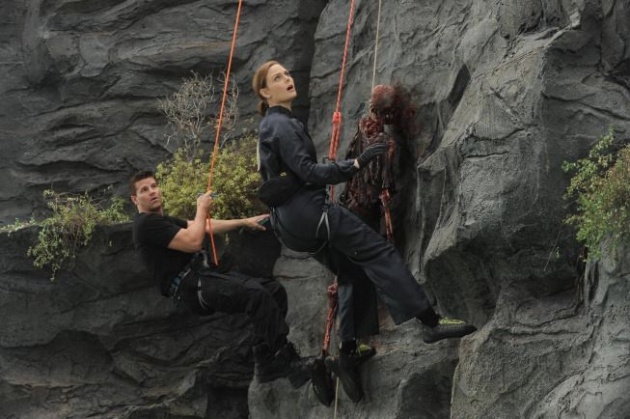 Just Hanging Around With a Body

The episode opens at the top of a cliff with ropes leading over the edge. Brennan and Booth are on the cliff face next to a body. Brennan is asking about when they are going to tell everyone their plans for the wedding. This is because, in the previous episode, "The Sense in the Sacrifice", Christopher Pelant finally miscalculated, thinking Brennan wanted him alive more than she did, and got shot in the head for it by Booth. So Booth proposed to Brennan, explained why he backed away in "The Secret in the Siege" - which Brennan had guessed - and she accepted. Booth doesn't want to tell anyone until all the plans are in place; he doesn't really want too much interference from the others. Although they may clash themselves. The man is white, in his fifties and badly damaged. Brennan thinks it might be an accident. Booth does not. There is also a hawk nearby, and it's eating a finger. So Brennan wants the hawk taking back to the lab as well.

At the office, Booth wants Sweets advice on something. Not the wedding. Which takes a bit of getting through to him. What Booth wants Sweets' advice on is a computer-based profiling system, VAL. Sweets isn't too happy about the idea; nor, for that matter, is Booth. Booth doesn't believe that computers can replace people. His example is poorly chosen - humans versus computers.

Dr. Wells is Back and Still Obnoxious

Dr. Oliver Wells, from "The Fact in the Fiction", is back as an intern. He's still not making friends; stating the time of death before Cam does, and saying if she differs, she's wrong. His behaviour starts annoying Cam and Angela comments that Wells mustn't have many friends (he says none; Angela is not surprised). The Jeffersonian does not believe that the victim was an experienced rock climber, as he lacks the required skeletal damage. VAL thinks he was. 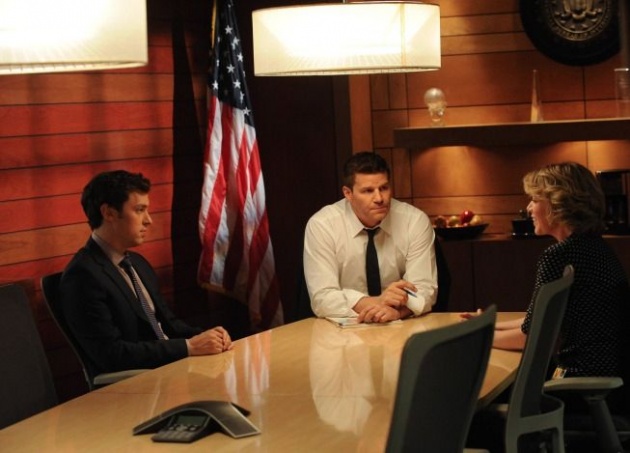 The Victim Was Dying of Cancer

The dead man had terminal cancer and Angela manages to identify him (Wells is not impressed). The man, Charlie McCord, was a high school principal and had recorded a lot of videos on a website - which require purchasing - after he discovered he was terminal. Booth thinks McCord is deep; Brennan, not so much. According to the widow, her husband was afraid of heights and wasn't into rock climbing. Although the knowledge that he was dying might have made him more open to new experiences. 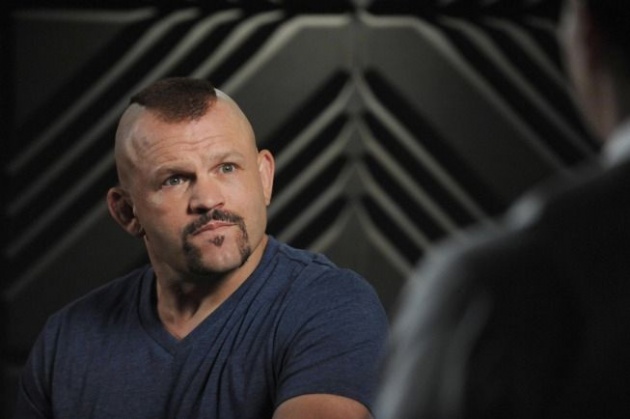 There's a video on the victim's phone that shows him sucker punching another man. The man is an MMA champion, Chuck 'The Iceman' Liddell (he's a real MMA champion). The Iceman is apparently big on revenge, but the pair had never met beforehand. Charlie had apparently called him afterwards, and Chuck thought he was a nice guy - punching Liddell was on Charlie's bucket list. Which makes you wonder what else might be on the list that someone might have taken serious offence to. Especially given the episode's title. Although killing someone who is terminal is a bit superfluous. The idea of bucket lists crops up with others in the episode. 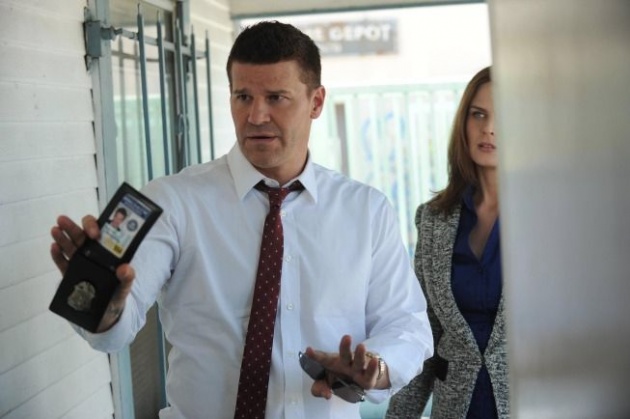 Sweets and VAL are Disagreeing

Charlie's wife wasn't his emergency contact, but someone else at the school was, a younger man who Charlie helped get a job. He had been helping Charlie with his bucket list, but backed out because it was getting too crazy and Charlie was going to kill himself (when you're dying the thought of killing yourself by accident is probably not a biggie). The man has a copy of the bucket list, and only two things were left. Rock climbing, and help a woman who used to be a bookkeeper at the school. Until Charlie caught her cheating, she got arrested, went to jail and lost her kids. Which is a heck of a motive. Charlie had been trying to track her down. Perhaps he did. VAL certainly thinks the woman is the prime suspect. Sweets is not impressed. Charlie appears to have been hit on the head but they can't work out what with.