Bones - The Monster in the Closet 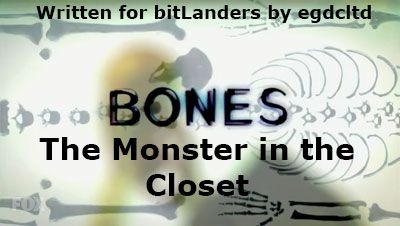 "The Monster in the Closet" is episode thirteen of season eleven of Bones, the forensic drama television series loosely based on the novels and life of anthropologist Kathy Reichs. In this episode, a dead body leads to another that was filed in Limbo, meaning that there is a serial killer out there.

Monster Are Not Real

The episode opens at night and it's raining. Brennan and Booth are at home when Christine screams for help, and says get away, don't hurt me. Christine tells her parents that a monster came out of her closet. Booth tells Christine that he scared it away earlier; Brennan doesn't like him saying this and instead tells Christine that monsters aren't real so Booth didn't need to scare it away. Booth agrees and says what he actually meant was that he would never let anything happen to Christine. Christine is upset that they don't believe her and Brennan says she's sure it felt very real. So Christine asks to spend the night in their bed.

Aubrey Suggests Christine Threatens the Monster with Her Father

The next day at the FBI Aubrey approaches Booth and says he's got something for him. Unless it's a really big cup of coffee, Booth isn't interested. Booth can't find his mug so takes the entire jug of coffee back to his office. Aubrey offers some advice for Booth regarding Christine; he says that Booth should tell Christine that she should go up to the closet and tell the monster that if it doesn't go bye-bye, her dad will put a cap in its ass.

A Body Dump in a Well-Visited Park

Back to the case Aubrey has, and a dog walker found a body in Cherrywood Park when the dog went for the remains. The body is dried out, so it probably seemed like a rawhide dog chew. Booth says that something is not right - and not just the dog going for the body. He asks Aubrey if he's ever been to the park and the latter says no; as a single guy it would seem a bit creepy going to a family park. This is Booth's point - the park is well visited and there's no way a body could remain undiscovered at the park for long enough to dry out. Which means someone wanted it to be found. Which means a body dump. 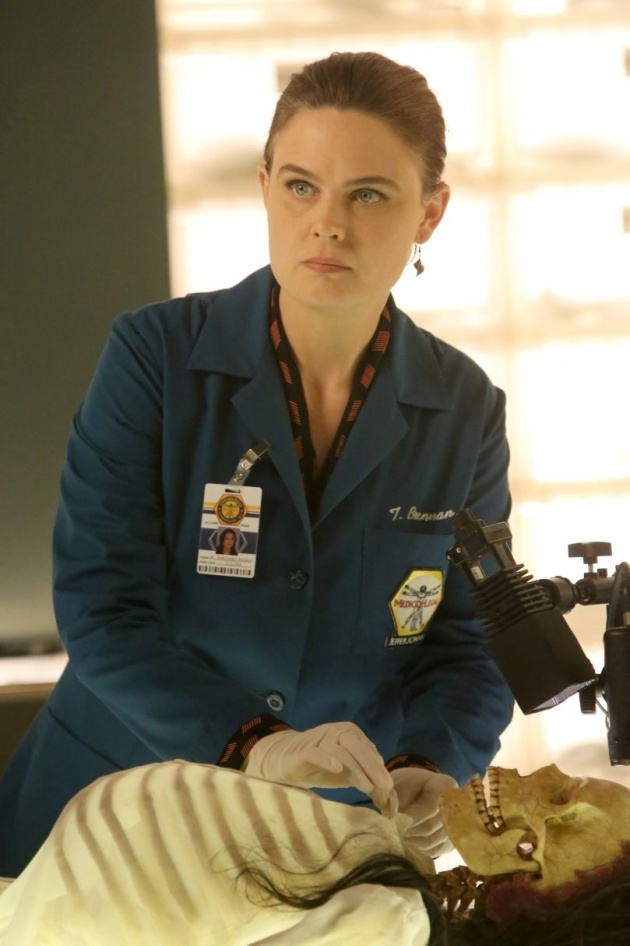 At the Jeffersonian, the body is being examined. It's a female wearing a dated dress and Hodgins comments that she's also a fashion victim. Brennan is offended by the remark and tells Hodgins that it's uncalled for, and he needs to show respect for the dead. Angela tells them that Hodgins is currently not showing respect for the living. When Hodgins goes away to examine the victim's bag, Cam asks Angela if she should send Hodgins home. Angela says no; Hodgins at home is actually worse. There's extensive damage to the face making facial reconstruction hard and no adipocere.

Hodgins has examined the bag and says that the others need to look at what's in it, for it's officially creepy. There's a mixtape - an actual cassette - labelled 'HOME,' a Bible that has been extensively marked and a lipstick. According to Hodgins, everything is vintage. 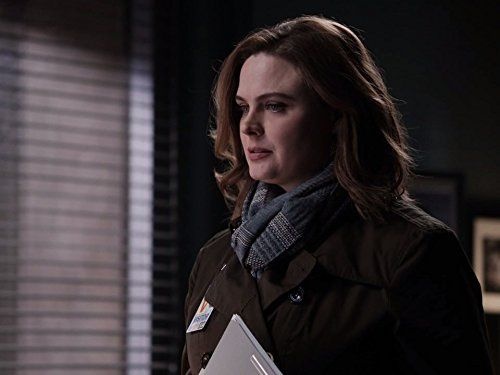 Living With the Dead

Brennan turns up at Booth's office, as the evidence, she says, is far from normal. The body didn't dry out naturally. Instead, the killer removed the skin and scraped away the fat before adding it again. Just like a taxidermist. The skeleton was also articulated, and there is wear along the joints showing that the killer repositioned it frequently. Not for the really creepy reason. Brennan tells Booth that the killer lived with the body for at least 6 months. There's also multiple blunt force trauma injuries to the skull, all done post mortem, but not done to obfuscate the victim's ID.

Lots of Weirdness; Call a Profiler

Booth is listening to the mixtape on a cassette player when Aubrey comes into his office. Aubrey says that Angela could digitise that, but Booth wanted to listen to it the way it was intended to be heard. Which didn't reveal anything. The killer applied lipstick to the victim after she died and the passages in the Bible that were marked are to do with the punishment of the wicked. Booth asks Aubrey to contact the profiler, Karen Delfs, seen in "The Doom in the Boom". 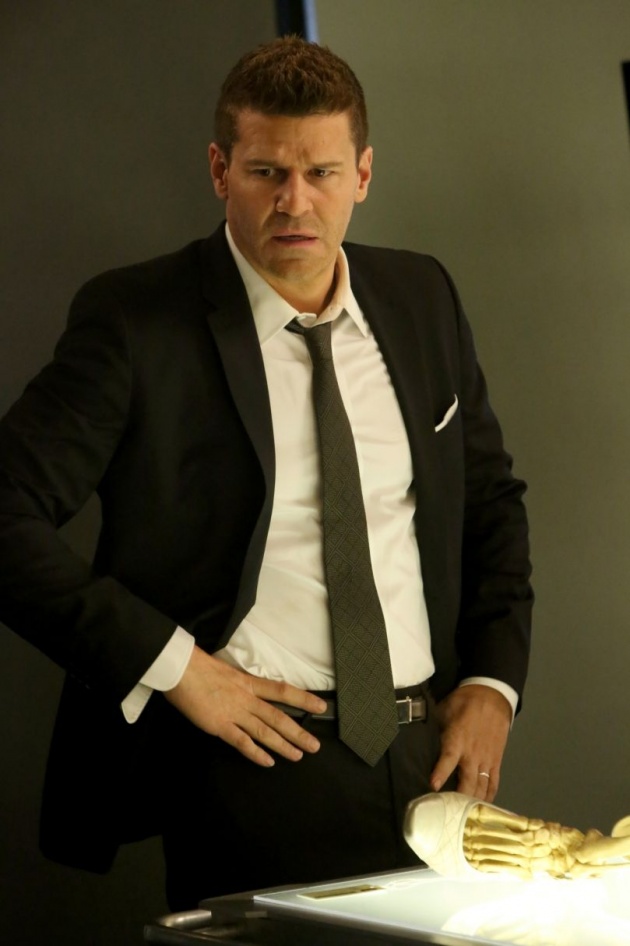 The Husband Knew His Wife Was Never Coming Back

Angela manages to ID the victim who was reported missing by her husband six months ago. When Brennan and Booth go and see him, he is behaving rather oddly for someone who has just been told his wife is dead. However, the husband, Jim Monroe, says he wasn't surprised by this. His wife just didn't disappear, and a couple of hours after she went missing, he knew she wasn't coming back. His wife was a social worker who placed kids, and they should speak to her supervisor, Neil Hogan. She had received threats from families who had kids taken away and from prospective foster parents she deemed unfit.

Arastoo Recognises the Damage to the Bones

Arastoo is at the Jeffersonian, which comes as a surprise to Cam. Brennan had told Cam she was calling in outside help, but never mentioned who it was. When Arastoo sees a hole drilled into the victim's bones, he says he needs to speak to Hodgins, as he has a feeling he's seen the damage before. There's a partial skeleton - much of it was lost to scavengers - that had similar holes, and similar damage to the teeth. Where the killer spoon-fed the corpses.

The remains were in Limbo, but Brennan doesn't recognise the remains. Arastoo tells her they were catalogued during the time that she and Booth quit. So, what they actually have is a serial murderer whose victims appear to have nothing in common. On examining the second set of remains, Brennan finds out that Arastoo has done all the tests she would have done, so tells him he has nothing to feel guilty about that the killer wasn't identified before he killed again. Arastoo doesn't feel guilty; it looks as if Brennan is the one who actually does.

The Killer Needs His Victims to Stop Him From Killing

According to Delfs, the murderer was 'cra-cra' - crazy. Apparently Sweets had left notes in Booth's file that he was easily annoyed by big words. She decides to change that to just 'easily annoyed.' She believes that the victim was a mother figure, one who could stop the killer from killing. Eventually, the compulsion became too much, and the killer 'killed' the already dead victim. 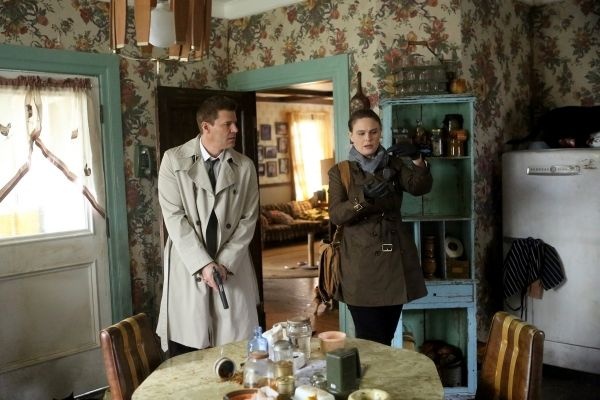 The Man With Thirteen Cats

Brennan and Booth head to a very out of the way place where a man who had been repeatedly turned down as a foster parent lives. He has 13 cats and an apparent fixation with the victim. The place smells foetid, as if something has died, which is probable cause for entry. There is something not quite right about the suspect; he really doesn't seem capable. 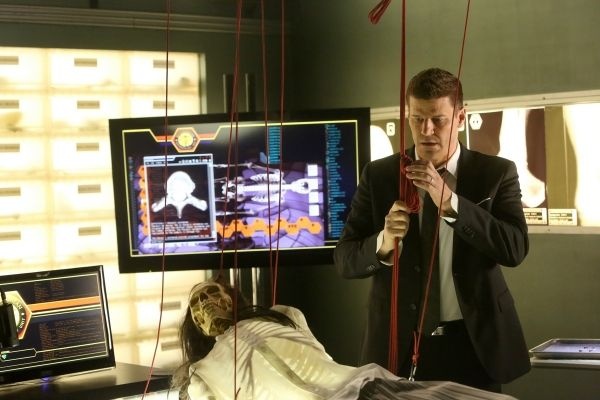 Hodgins is still being Mr Grumpy and is damaging his relationship with Angela. The holes drilled in the bones of the two victims have a rather disturbing meaning - although it's one that can be figured out well in advance. The killer isn't found in this episode, though; it seems the team may have a new reoccurring foe to deal with.

Bones - The Monster in the Closet Trailer