Bones - The Nail in the Coffin 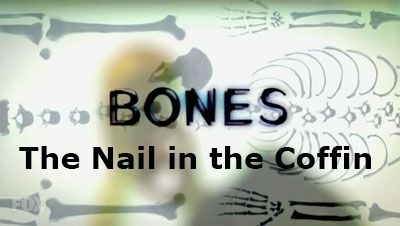 "The Nail in the Coffin" is episode twenty-two of season nine of Bones, the forensic drama television series loosely based on the novels and life of anthropologist Kathy Reichs. In this episode, another apparent victim of the Ghost Killer turns up.

Back in "The Sense in the Sacrifice" Christopher Pelant had told Brennan that he had discovered a female serial killer that no-one else had discovered, and that Brennan needed him alive to catch her. In "The Ghost in the Killer", Brennan had received human remains with a message asking her to find out how the victim really died. The trail lead to a rich family that Hodgins grew up with, the McNamaras. Although he didn't have a high opinion of them. Specifically Trent, the boyfriend of the woman that was delivered to Brennan.

Is There a Ghost Killer?

The others were generally not believing that there was a Ghost Killer, but Cam gave all five Ghost Killer files to Clark so he could look through them. Trent McNamara had died, apparently of a self-inflicted gunshot wound, but Brennan believed he was a victim too. Booth, by the end of the episode, had decided that Brennan was right about the killer, and would catch her - although they didn't know who it was yet.

An Unpleasant Surprise when Camping

This episode opens with a family sitting around a campfire at night. The father is telling a ghost story, but the daughter doesn't seem to be appreciating it. The wife says that where they have camped is creepy enough, and her husband stops telling the story. Then they hear a noise. Then human remains fall out of the tree. The daughter panics, the wife blames her husband thinking it's a prank and the son thinks it's cool.

Going a Little Overboard on a Questionnaire

Brennan is filling out a Bureau questionnaire related to Booth's promotion, as mentioned in the previous episode, "The Cold in the Case". She has taken the statement to use additional paper if needed a bit too literally, and has used up 18 pages. On a three line question. This will probably fill a book when she's finished.

Cam calls Booth about the body and says she just wants him, not Brennan. Brennan does not take this well, which Booth could certainly see coming. At the crime scene, Cam says she didn't want Brennan to derail the case by talking about the Ghost Killer and Booth says that she must have had a reason to think the cases are connected. The victim, a woman, was strung up by a noose and fell down when the head separated from the body. Hodgins says she has been dead for 8-10 days - and a fingernail has been ripped out, just as in the Ghost Killer murders. 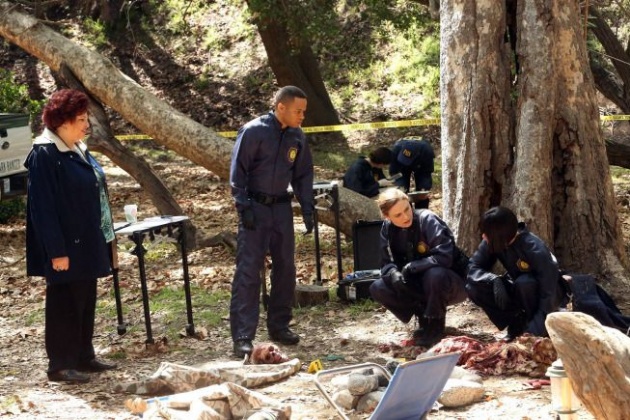 Brennan turns up anyway, and it seems the victim had all of her fingernails ripped out. They were all badly damaged, so she was wearing fake nails. Only these weren't fake nails, but real ones belonging to other people. Which is a bit creepy. 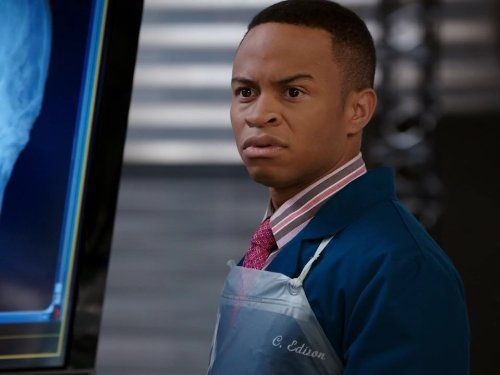 The Victim is Quickly Identified by Brennan

When Brennan looks at the skull at the Jeffersonian, she says that they won't need Angela to do a facial reconstruction. The skull has a rare genetic abnormality, one which the victim shared with Trent McNamara. Which means the victim is his sister, Stephanie. She was apparently treated with homemade anaesthetic and abducted.

Strange Signs at the McNamara House

At the McNamara's, the gardener said that she hadn't seen Stephanie in days, but that wasn't unusual. In the stable, one door shows signs of being repeatedly scratched, and there is a fingernail stuck in it. The scratches are very old though. 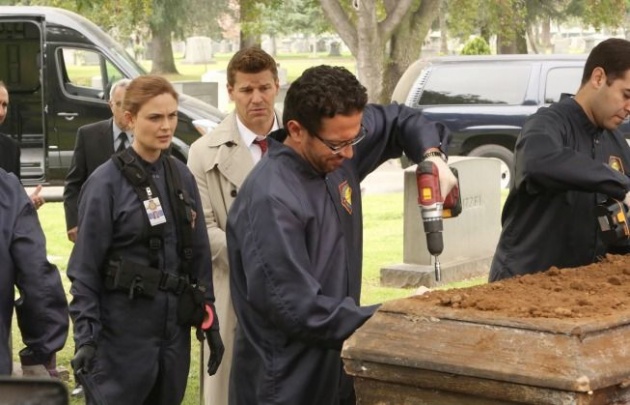 The SEC had conducted many investigations into the McNamaras, and they'd got off with a smacked wrist at worst. Not jail time. The fingernail in the door matched Stephanie, and the nails she wore matched all the other victims. The gardener also turns out to be related - McNamara pere was a nasty piece of work. Then the case takes a rather unexpected turn.

Bones - The Nail in the Coffin Trailer