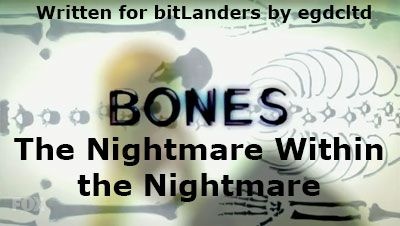 "The Nightmare Within the Nightmare" is episode twenty-two of season eleven of Bones, the forensic drama television series loosely based on the novels and life of anthropologist Kathy Reichs, and the season finale. In this episode, it seems that the serial killer called The Puppeteer is going after Brennan. 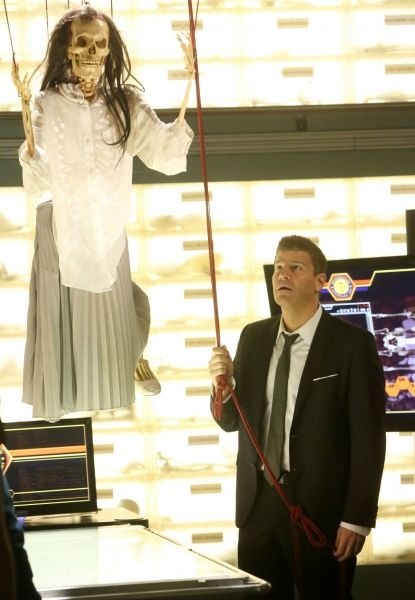 In "The Monster in the Closet" two bodies were linked to a serial killer who would kill his victims, preserve them and make them into puppets and then live with them for months, before discarding them and finding another. The killer, called The Puppeteer, had used a man called George Gibbons as a patsy, as he threatened to kill Gibbons' best friend - one of his cats. Gibbons killed himself in his cell and The Puppeteer would be looking for a new victim. It seems he may have fixated on Brennan. 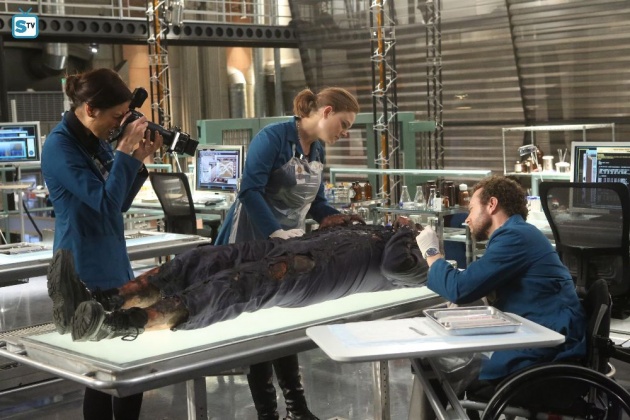 Brennan is examining a badly burned body that was damaged in an explosion. She says that she has a feeling that the victim's identity will help them find the killer. Hodgins agrees, and says there's something different about this body. There's a drill hole in the left shoulder, like normal, but Hodgins shows that the corpse is bleeding. Brennan says that corpses can't bleed and Angela replies that old wounds can cut deep. Then the corpse moves and Brennan - who was having a nightmare - wakes in the car with Booth.

Not the First Nightmare Either

Booth is concerned because Brennan hasn't slept properly in a week, as she's having nightmares. Booth thinks she's worried because the killer has missed his timetable of killing, and Brennan corrects him, saying that with serial killers the word is interval. She says she can sleep when it's over.

Oh! So still not sleeping, uh?

Cam is at the crime scene and tells them that the body was discovered by workers preparing to demolish the building. It's going to be replaced with a charter school focusing on maths and science. Booth says that's good isn't it, a new squint school. Brennan replies that maybe someday the U.S. will pass Estonia in maths and science. Cam comments that Brennan still isn't sleeping.

Feelings - Just Not Pleasant Ones

Cam has told Hodgins to sit this one out and Booth replies that he really wanted to see Hodgins, as Booth had heard Hodgins was getting some feeling back in his legs - in the previous episode, "The Jewel in the Crown", Daisy had discovered that Hodgins was having involuntary movements in his, until now, paralysed legs - and Cam says that Hodgins has regained some feelings, just not altogether pleasant ones. 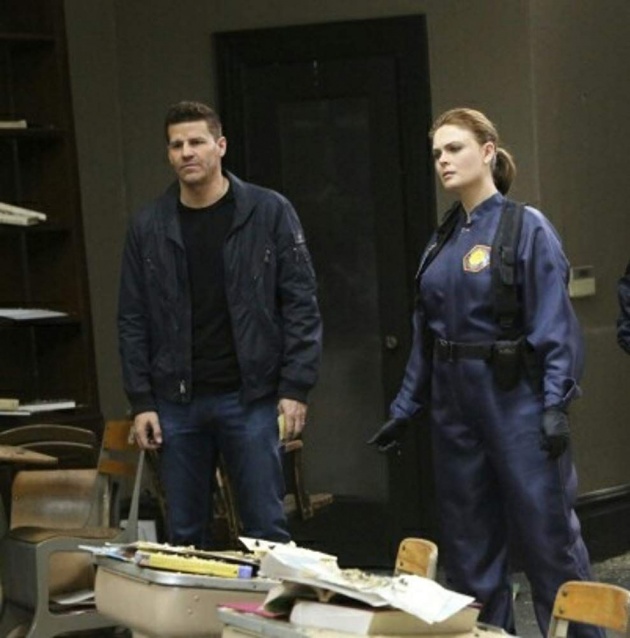 The killer has changed his MO with this victim, as the previous two were left in a national park. Not an abandoned school. Booth calls the killed the Puppeteer and Cam says she prefers Pepito, the little puppet. Brennan complains that the name doesn't make sense, as it doesn't elicit fear, bit Booth says he agrees with Cam - serial killers shouldn't get cool or frightening nicknames. As they arrive at the body, Cam remarks 'No matter how terrifying they are.' 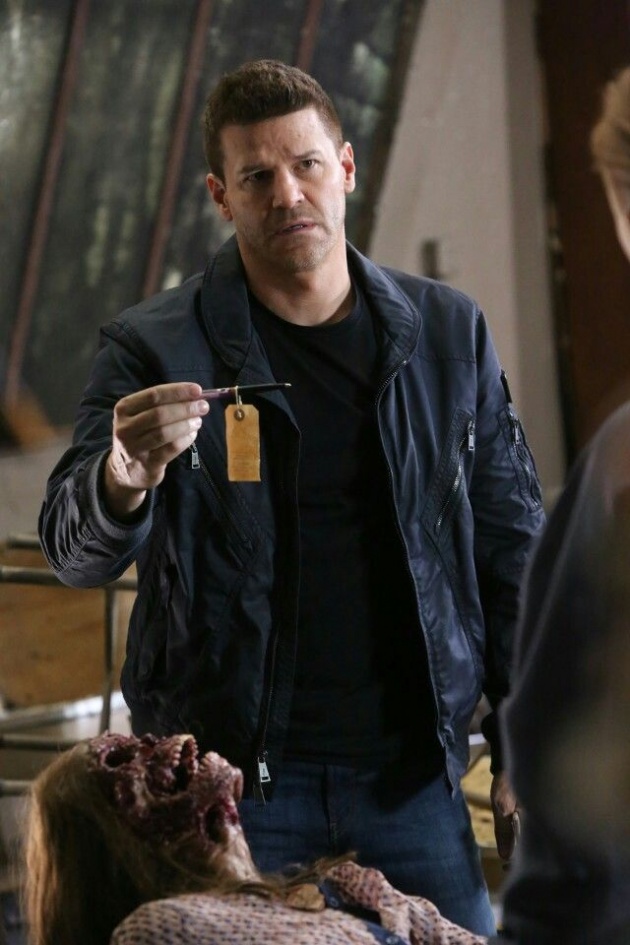 These are your clothes, Bones. The victim is meant to be you.

The Victim is Wearing Brennan's Clothes

The victim has been hit in the face and there's a Bible and mixtape left at the scene just like in the previous murders. Brennan says it's different, and not just the classroom setting. She says the victim's ensemble is more contemporary than the others. They are from a modern designer who uses sustainable materials. Angela asks how Brennan can be sure of that as she hasn't even seen the labels. Brennan replies that she used to own a similar outfit, but donated it to a thrift store for the Women's' Mission Centre. Booth then finds a tag from that store on the body. The clothes aren't merely like Brennan's - they are Brennan's. The victim is meant to be Brennan.

At the Jeffersonian Wendell Bray asks whether he should email some results to Brennan or let her sleep. Hodgins, who is wearing a headband, tells Wendell to email them, because Brennan is not going to be sleeping. She went home to check on her kids. Wendell asks if Hodgins is okay, and he says he's fine. Wendell points out that Hodgins is wearing a headband because he's sweating from pain. Hodgins finally admits that yes, he is in pain, but this is apparently a good thing. Angela arrives with something disturbing to show them. She had identified the woman, who had been reported missing, but the killer had restyled the victim's hair. Into the same style as Brennan.

At the FBI Aubrey says the songs on the mixtape are children's classics, just like before, but he's going to dig into them because there's something familiar. The dead woman had DUIs and had been fired for embezzlement - which means she's not a pillar of the community like the other victims. Instead, she appears to have been a surrogate for Brennan. 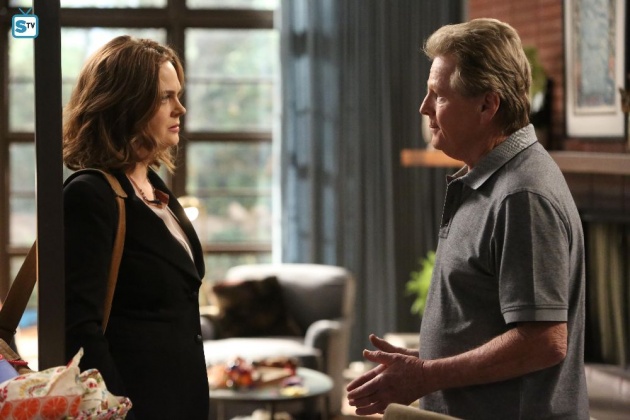 At home, Max tells Brennan not to worry because he will look after the kids. Brennan doesn't want to talk about what's troubling her, but Max convinces her to do so. She says it may just be sleep deprivation, but she feels as if she's being watched everywhere. Brennan says she has no empirical evidence of this. Max tells her to forget that - which he admits is not in her nature - and to be careful.

The Victim Was Seeing a Therapist

The latest victim's ex-husband says that his wife had a drinking problem. He hadn't spoken to her in some time because her therapist had recommended they spend some time apart. The therapist had initially been treating her for alcoholism, but she had begun to develop new symptoms, nightmares and paranoia.

According to Hodgins, the latest victim wasn't fed the same gruel as the others. When he describes it, Angela says it's one of Brennan's favourite meals. There was also dirt on the victim's shoes, but beneath that was disinfectant. Hodgins believes the killer cleaned the shoes before applying the dirt. The evidence may have been planted to mislead. The killer, wherever he is, has puppets with pictures of all of Brennan's friends on their heads. Which is not creepy at all. 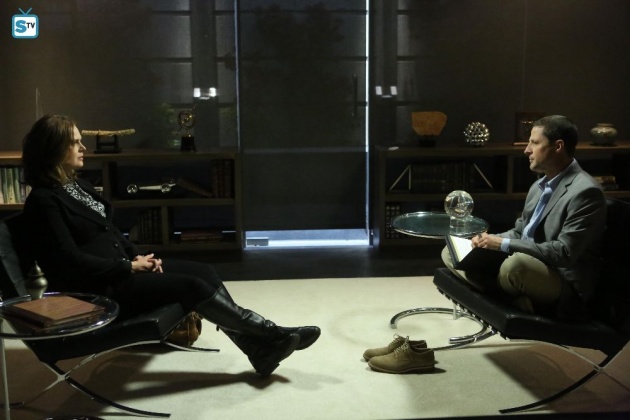 The therapist the victim was seeing, Dr. Brandon Faulk, has pictures on his wall that Brennan comments on. He says that his first doctorate was in neuroscience. He views psychology as a soft science that is open to interpretation, and wants to bring a different approach. Brennan, who feels that psychology is not a science, finds this admirable. Dr Faulk says that months prior to her murder, the victim had been suffering from paranoia and nightmares. Not a premonition of her death as such; instead, he says that nightmares connect memory and emotion. She probably knew who her killer was. Brennan seems to find this idea interesting.

Another Nightmare; Brennan's Mind Seems to Be Trying to Tell Her Something

According to Aubrey, all the songs the killer recorded on the mixtape come from a 1978 songbook - and in the same order. Only a couple of thousand were printed, and most were sold within the same state. Brennan is at the lab when Wendell brings her a drink. She is looking at past cases, all burn victims, as she thinks there's a connection. After Wendell leaves, all the power goes out and, when Brennan calls, there is no-one in the lab. Only the sound of footsteps. Probably another dream, confirmed when the walking burn victim appears again. Brennan jolts awake and Wendell is there again. Only his hands are burnt. Brennan jolts awake again, this time at home, and she says she needs help.

The killer is targeting Brennan directly and, as Gibbons said, he is very clever. He's leading people around and knows what he is doing. There are several suspects, but the true identity isn't revealed until the end, although it can be guessed before. Brennan's nightmares were telling her something - it looks like she does know the killer. A cliff-hanger ending leading into season twelve and "The Final Chapter: The Hope in the Horror".