Bones - The Pathos in the Pathogens 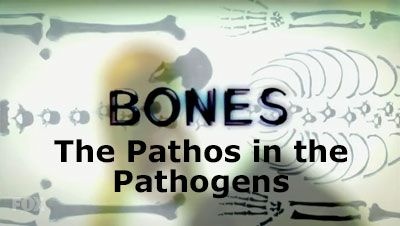 "The Pathos in the Pathogens" is episode twenty-three of season eight of Bones, the forensic drama television series loosely based on the novels and life of anthropologist Kathy Reichs. In this episode, a body infected with an unknown but highly dangerous virus is discovered and Mr Vaziri gets infected. 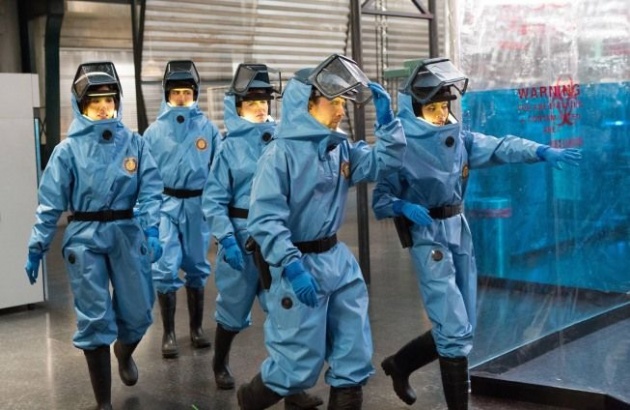 The episode opens in the lab at the Jeffersonian with Brennan overseeing the construction of a biohazard tent. She asks Mr Vaziri if they have enough suits for everyone and he answers yes, with two left for him and Brennan. Non-essential personnel are being evacuated. There's a rep from the CDC waiting for them to be finished. 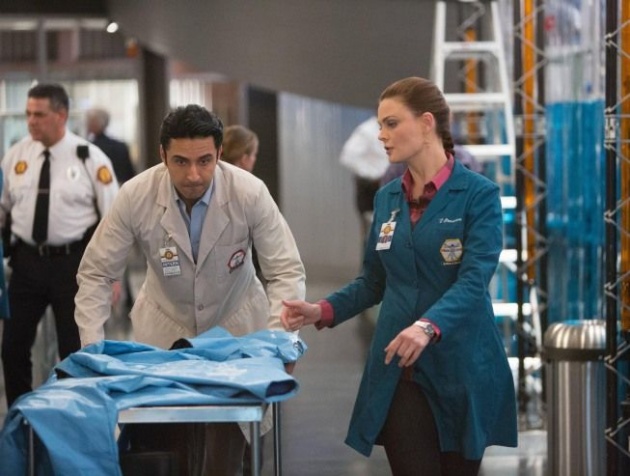 A Body with an Unknown Virus

A biohazard disposal facility in Maryland came across a body in some veterinary waste. The original belief was that it was necrotising fasciitis, a flesh eating disease, but the body is falling apart too rapidly for that. They don't know how the virus is spread, they don't know what it is and they don't know who might be exposed. Booth is worried. The body was found during a surprise inspection of the biohazard disposal facility, as there had been problems with the facility in the past.

The doctor from the CDC, Jacobs, has never seen a virus like it. They need an ID of the victim, a woman, and everyone is suited up investigating the body. According to Brennan, whoever disposed of the body knew how deadly the virus was when they disposed of it. Which could mean that they planned to use it on others. Which could mean bioterrorism.

Brennan identifies the dead woman and Booth speaks to her boyfriend, Ben. The latter says that his girlfriend was a journalist blogger, as he is. He does travel blogging; she did big pharma. Ben hadn't spoken to his girlfriend, Mia, in three days, but that was not uncommon when she was working on a story. Ben didn't know what Mia was working on, only that it was a big story. 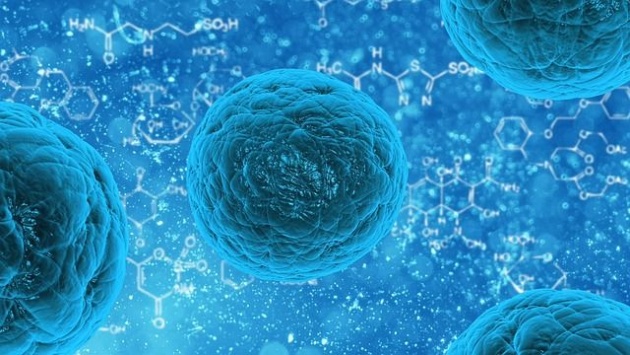 The virus is determined to be blood borne, not airborne, but it could always mutate if it gets out. Which would be bad. Angela is looking on Mia's heavily encrypted laptop and discovers that she was talking to a doctor about viral mutation of diseases.

The team is going to wrap Mia's body when Mr. Vaziri gets stabbed in the hand by something sharp and unseen in one of the bones. Jacobs is flushing the wound and Cam, who is dating Arastoo, is very concerned. Brennan finds that what stabbed Arastoo was the tip of a microneedle that was used to infect Mia. Cam wants to talk Mr. Vaziri to a hospital, but he says that's a bad idea and that he should remain at the Jeffersonian so that they can study the effects of the virus. Dr. Jacobs manages to identify the broad strain of the virus, but it's one that has been deliberately mutated. There is an antiserum, but there's no guarantee it will work, even if the virus hadn't been mutated.

Find the Killer to Save Mr Vaziri

Mr. Vaziri is becoming ill quite rapidly and Brennan says that whoever mutated the virus will have a viable antiserum (which might be overoptimistic in the real world). In order to save Mr. Vaziri, they need to find the killer. Mia was also working on a horse doping case, and sleeping with the person she was investigating. Which adds a couple of suspects, the person being investigated and Mia's boyfriend. 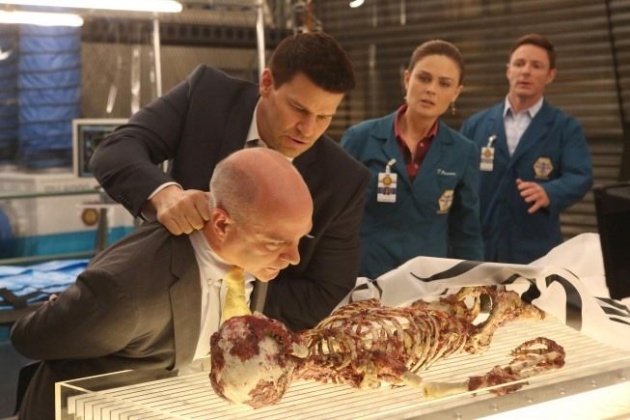 Hodgins and Brennan turn to folk remedies in the hopes of keeping Mr. Vaziri alive long enough to find a treatment as everyone is rushed off their feet trying to find out who killed Mia.