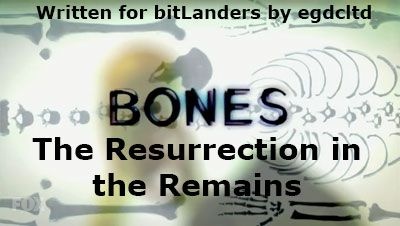 "The Resurrection in the Remains" is episode five of season eleven of Bones, the forensic drama television series loosely based on the novels and life of anthropologist Kathy Reichs. This episode is a crossover with Sleepy Hollow after a headless 18th century redcoat's corpse is found in an old church.

A Corpse Would Make an Excellent Halloween Decoration

It's Halloween at an old, abandoned church and a young man is putting up a sign saying '$20 beer wristbands'. Two people are decorating the church and one is on the phone telling the person at the other end that a certain girl is coming. He tells the other young man helping that, if the guys think that girl is coming, they will come, and that if the guys come the rest of the girls will come too. The guy who knows everything tells the other that they need to place the beer keg up top where it will be hard to get at and last longer. Once it's place, he says 'Perfect' - then falls through the floor as the floorboards collapse. The second guy sees a body in the hole, then the first does too. Although this would make an excellent Halloween decoration, neither seems terribly happy. 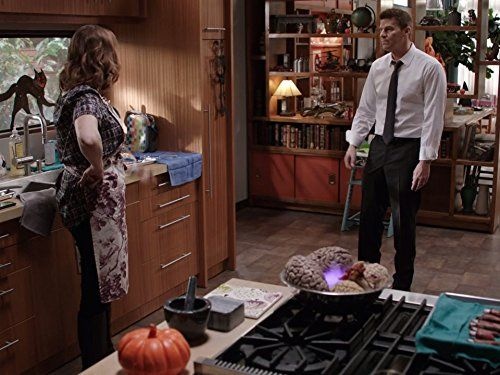 At home, Booth has bought 15 lbs in sweets for Halloween. Brennan isn't so happy, because she has strong feelings about children and sweets. Booths tells her it's insurance; last year they ran out and started handing out raisins, and the house got egged. Brennan has what appears to be a brain on a plate; when Booth inquires she tells him that she's making edible prop brains for Christine's school Halloween party. So Booth takes a bite of it. Then Brennan tells him that he's just eaten part of a real brain she brought from the lab to use as a model. Booth suddenly doesn't like the taste as much - although Brennan was pranking him. Because that's what you do at Halloween. Booth says it won't end there and he'll get her back - then she gets a call about the body. 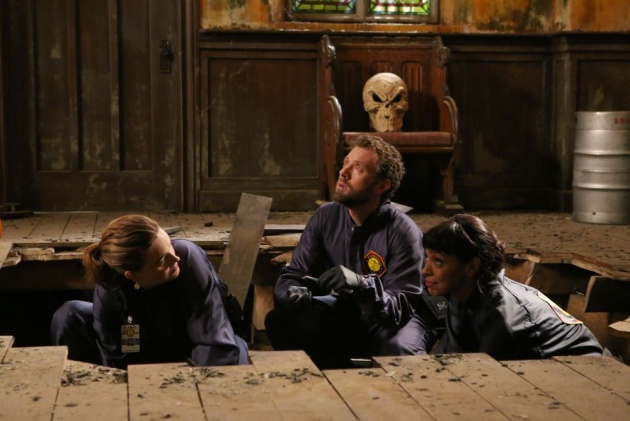 A Kegger in a Church?

Booth thinks having a kegger in a church seems sacrilegious, but Brennan tells him that All Hallows Eve is a religious festival. The victim appears to have been dead for about 2-3 days but seems to have exsanguinated elsewhere. Hodgins turns and looks at Booth, giving him a shock - Hodgins is wearing demonic contact lenses because Michael Vincent flushed his normal ones.

A Headless Body with a Jack o'Lantern for a Head

In the same hole as the victim Hodgins finds an iron coffin - a mortsafe - with a rune on the front of it. The coffin has been opened recently, so they open it again to take a look inside. The body inside wears a uniform that looks to date from the 18th century and Booth says that, going by the movies, it's a British redcoat. He happens to be right. The old body is lacking a head and Hodgins manages to knock a jack o'lantern into the coffin where the head was.

Wendell Bray is assisting and the redcoat would appear to have been 6' tall. With his head. Which was very tall for the era. Hodgins says that the redcoat is genuine and according to Brennan the victim was close to 50 when he died, although there is no obvious cause of death. Other than, say, the missing head. Brennan tells them that, although the 18th century body is interesting, they are examining it for clues as to the other victim. So, what's the connection between the two?

Angela has been struggling to find a facial match for the victim and Cam brings her a multiply pierced ear. Which Angela comments does not go with the victim's attire. The hair also shows that it may now be blonde but previously was magenta. This does bring up a match, a Sarah Lipman, a medical student reported missing yesterday. 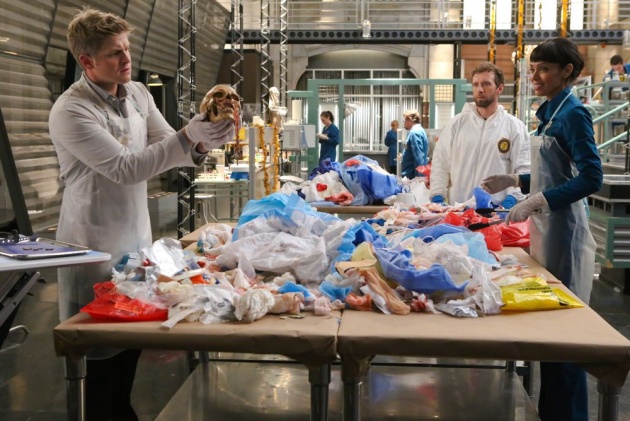 The doctor running the programme Sarah was on when asked why she changed her appearance comments that she was applying for a fellowship. If you want people to think you're a doctor, you need to look like one. Sarah's boyfriend last saw her a few days ago, but their schedules were crazy so he didn't think anything of it until she didn't turn up to class. In Sarah's locker is an old book of witchcraft, which bears the same symbol as the coffin did.

According to Hodgins, the 18th century redcoat was wearing a very expensively dyed uniform, so was probably an officer. Brennan says that the symbol on the book, and the coffin, is a Norse rune, and Hodgins makes a comment about it being otherworldly. At which point someone comments that this is their department.

Two people, a man and a woman, have arrived. They are Agent Abbie Mills of the Westchester field office of the FBI and Ichabod Crane - of the Hudson Valley Historical Society. Now, this is weird. This is a crossover episode with Sleepy Hollow. Crossover episodes are not uncommon, and can be interesting - and annoying, if you aren't at the right point in both series, which can be pretty common - but the choice of series is odd. Sleepy Hollow is a fantasy mystery drama about a resurrected Ichabod Crane from the 18th century. Pretty much as far from Bones as you can get. 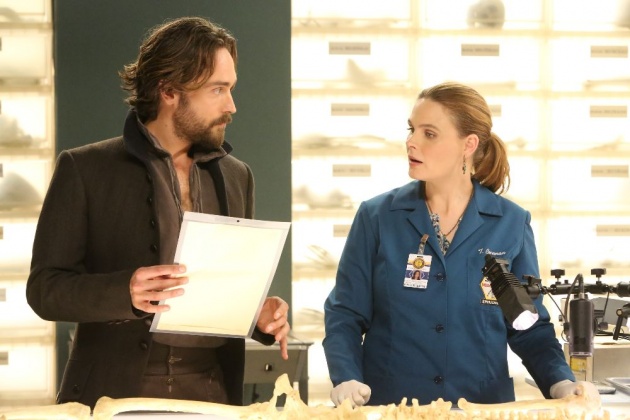 Agent Mills and Ichabod want the 18th century bones to see if they can help with a case in Sleepy Hollow. Probably the Headless Horseman. Crane believes that the body belongs to a redcoat who was decapitated on the battlefield, but Brennan tells him that the head was removed with a modern fine tooth saw. Brennan finds Crane and Mills' persistence both irritating and impressive. Angela manages to do a facial reconstruction of the redcoat - despite lacking an actual head! - and searches the historical database, finding a match to a General William Howe - who Ichabod knows of. And who is supposed to be buried in Twickenham, England. 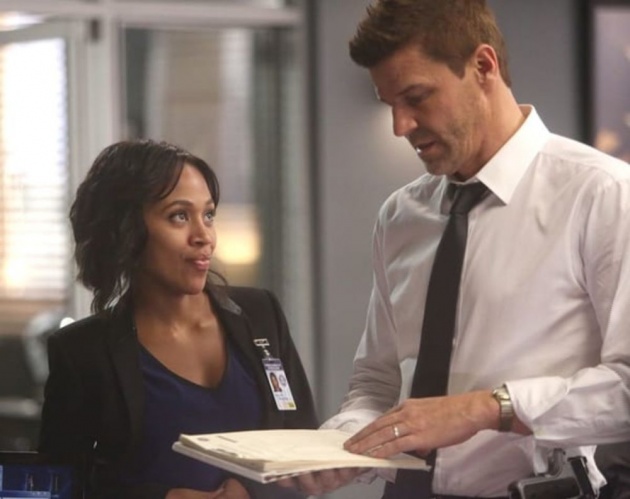 A Book of Spells on Raising the Dead

Ichabod identifies the book as a medieval book of spells called Treatise on the Subject of Shadows. Writing in it says that a skill has the power to raise the dead. According to Cam, Sarah's brain neurons show that she died two weeks before she, well, died. So suggests that perhaps the dead person Sarah was trying to resurrect was herself. 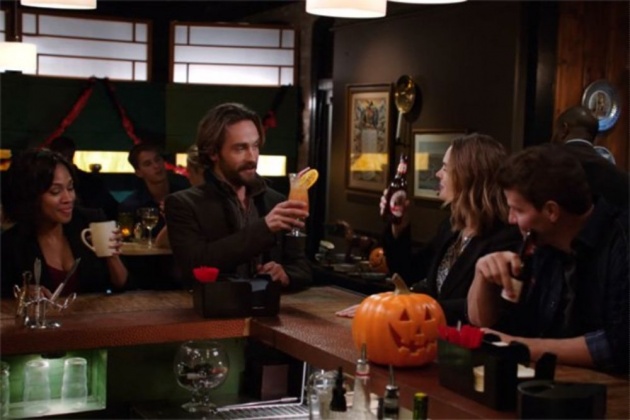 No Supernatural Stuff After All - Probably

Why the skull was removed now seems clear, but how and why Sarah died now needs figuring out as well. Despite the presence of two people from Sleepy Hollow, there isn't anything in the way of supernatural stuff in the episode.

Bones - The Resurrection in the Remains Trailer