Bones - The Spark in the Park 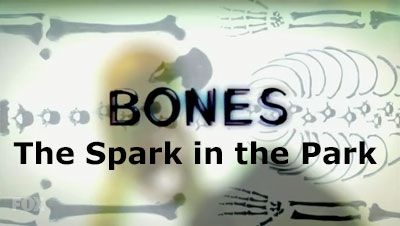 "The Spark in the Park" is episode eleven of season nine of Bones, the forensic drama television series loosely based on the novels and life of anthropologist Kathy Reichs. In this episode, human remains are struck by lightning and Cam confronts the woman who stole her identity.

How NOT to Protect the Integrity of a Crime Scene

It's night and raining and there's a body on the ground. There's a couple under an umbrella arguing as the man is trying to photograph the body to document it for the authorities. Then the woman says they should take some selfies to show their kids. The woman then says they should cover the body, as according to a TV show it is important to make sure the crime scene is undisturbed. So they place the umbrella over the body and walk away. You can guess what happens next; a lightning bolt hits the metal ferrule of the umbrella and the body explodes.

Cam Confronts the Woman Who Stole Her Identity

Cam is at the FBI; the woman who stole Cam's identity in "The Cheat in the Retreat" has been brought in. At the end of "The Fury in the Jury", Angela had got video of the woman who stole Cam's identity - and Cam had recognised her, her college roommate and a friend. Booth says that Cam shouldn't be there and tells her to watch from afar. Then they bump into the woman herself, who apologises. And Cam punches her in the face. Not quite watching from afar. 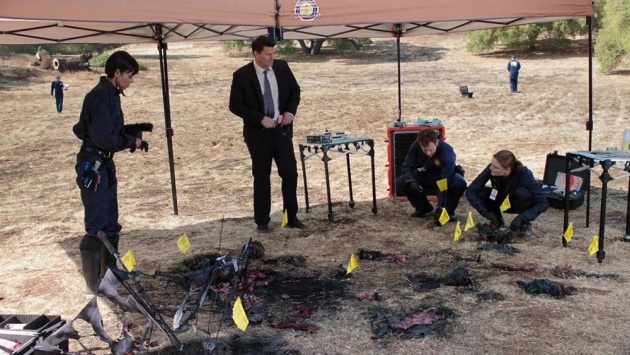 Brennan is 'Giddy' About Examining the Body

Then Booth gets a call about the dead body so they head to the crime scene. Which smells really bad. Brennan says the victim is female and it's the first recorded case of human remains being struck by lightning. The prospect of examining them makes Brennan 'giddy.' Cam estimates from the development that the victim is around ten years old but Brennan points out other evidence that puts the age at 16-17 years old. The body has suffered many fractures, not just from the lightning, and a surgical plate has been magnetised.

The Victim Suffered a Lot of Damage

At the Jeffersonian, a locket is found on the body with a picture of a man and woman inside; presumably the girl's parents. Mr. Vaziri says that the girl suffered a lot of damage, the most recent 7 weeks ago, suggesting systematic physical abuse.

Sweets, using the photographs that the couple who found the body took, says that the body has been placed carefully, with respect, and it shows that whoever placed the body had a personal relationship with the victim. He says it's possible that one parent could have killed her and the other placed the body. Angela creates a composite of the face using the images of the parents, which leads to an identification; her father had reported her missing. 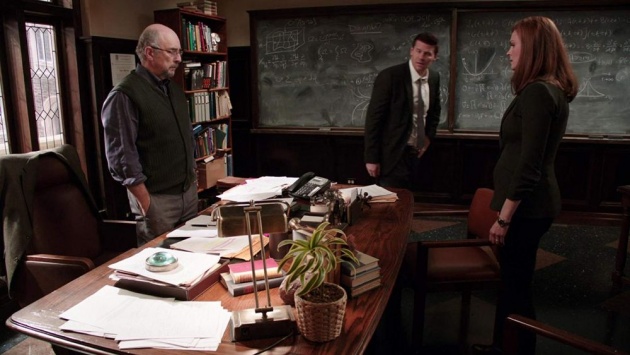 When Booth tells the father, Professor Leon Watters, a noted physicist, that his daughter is dead, he continues writing mathematical equations on a chalkboard (which Brennan says are beyond her in places). Which Booth does not understand and thinks looks suspicious. The mother is also dead, which Booth says is a bit of a coincidence, but she died of breast cancer.

Not Abuse But Gymnastics

Dr Watters says that his daughter wasn't abused, the damage was from gymnastics, as she was nationally ranked. His daughter also didn't go to school, she went to an online school for prodigies. Booth cannot understand the father's behaviour; Brennan, however, sees a lot of similarities between her and Watters. Booth thinks the man is psycho; Brennan says that if anything happened to him and Christine she would bury herself in her work, as people handle stress different ways. This causes quite a bit of friction between the two. 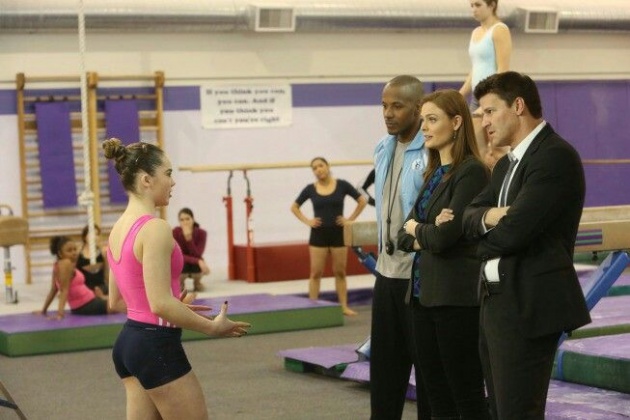 Not Returning to Gymnastics

At the gym, Booth is impressed by the physical skill of the gymnasts. The coach says that the dead girl, Amanda, was his best, and she was spending time off due to an injury. The injury happened when the second best girl dropped her, an accident. That girl also tells Booth and Brennan that Amanda wasn't coming back, as she was skipping physical therapy and taking drugs. So, who killed her and why? 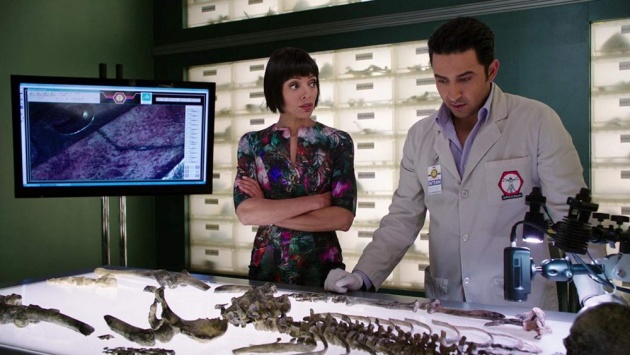 Wrath and Vengeance, Not Forgiveness

Caroline has said to Cam that she can get the sentence against her friend increased, and Cam really wants to do that. Mr. Vaziri tells Cam that she has won and that it's time to forgive; Cam says that she's more of a wrath and vengeance type.

Bones - The Spark in the Park Trailer