Bones - The Teacher in the Books 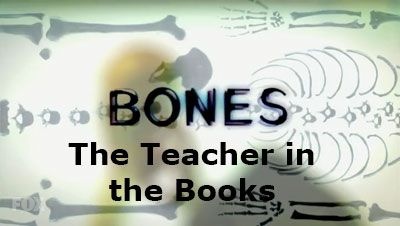 "The Teacher in the Books" is episode twelve of season ten of Bones, the forensic drama television series loosely based on the novels and life of anthropologist Kathy Reichs. In this episode, the body of a teacher is found in an abandoned bookstore and Brennan goes on Twitter.

A couple of men are in an abandoned bookshop at night. They're looking for scrap and one of them is picking up pieces of aluminium. The other says that if you want to make money from scrap you need stainless steel, copper or brass (not lead? That's really valuable) not aluminium (which is admittedly valuable but is also very light, so a lot of space is taken up by it). The man who supposedly knows what he's doing tells the first to keep it down, as they don't want to attract the cops. So, they aren't doing this legally. Admittedly, not a huge surprise given that it's night. The other man says that there's something in a pile of crap on the floor, but his friend tells him that the good stuff is in the walls; the wiring and plumbing. The one rummaging on the floor says that there's something shiny in the pile, and it might be gold. The shiny thing is a bracelet, and it's stuck, so he yanks it. Which rips away a human arm. His reaction isn't what might be expected; the man says that it's definitely gold. But that it smells a little funky from the arm.

Brennan is on the phone at home telling someone that she refuses to pander the lowest common denominator. On hanging up, Brennan tells Booth that it was her publisher, who wants her to start a Twitter account to promote her books. Booth agrees that this is a good idea (really? Brennan and Twitter do not seem like a great match) and a good way to connect with her fans. Brennan wants to know how you can say anything of substance in 140 characters or less (this being prior to Twitter doubling the number to 280). Booth then gets a call about the body in the bookshop and Brennan states that, unlike Twitter, bookstores are hubs of true complex critical thought. Booth points out that it's abandoned; that doesn't help Brennan's argument.

The Tragedy of an Abandoned Bookstore

At the shop, Aubrey says that the victim is dead under a pile of self help books. Brennan says it's tragic, but she isn't talking about the death but about the bookstore being abandoned. Both Hodgins and Cam agree with this sentiment; it seems both enjoy books. Real books too. The victim is a female in her early 20s and there are signs of a struggle.

Hodgins then uncovers something and tells everyone to take a step back. Booth says that Hodgins rarely warns of anything, so it's advisable to follow his advice. What Hodgins has found is the webbing of a brown recluse spider. Which can also be called dangerous. The spider shows that the victim died in the last 7-10 days. Brennan points out that the spider can cause necrosis down to the bone. Which is bad. Hodgins collects the spider, as it's evidence. Before they leave, Brennan calls out in shock - one of her books is in the clearance section.

Facial ID from Six Freckles and a Mole

Ms. Warren is the intern helping today and Cam says that, of the face, all she has are six freckles and a mole. Which she doesn't think will help for facial reconstruction, but Angela says it's actually useful. She has recently written a program that uses such identifying features against the missing person database. Then someone's phone bleeps, and Cam assumes it's Jessica's. However, it's Brennan's; she's sent her first tweet. Angela is surprised about that, then discovers that Brennan's tweet is a link to a 200 page article. Jessica says that tweets are supposed to be pithy. 200 page articles on specialist subjects are not pithy.

A Dead Teacher at Underperforming Schools

The dead woman is a Mia Ferrera, who was reported missing by her boyfriend. The dead woman was a member of the United Teaching Fellows, who place college graduates in underperforming school districts. The boyfriend says that he was on a coffee shop tour over the weekend, so didn't report Mia missing until the Sunday, as sometimes she got mad when he was on tour. The place they have is nice for a teacher and a musician, but Mia had a trust fund. And the place was in both their names; with Mia dead, the boyfriend inherits. 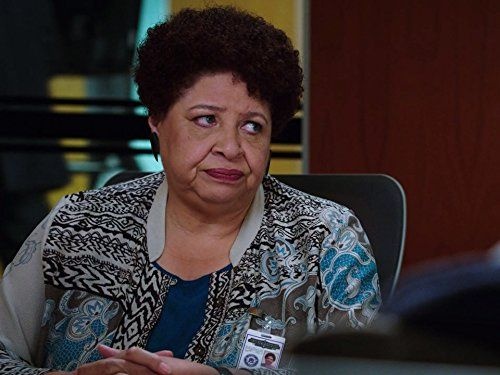 It's Personal for Caroline

Caroline collars Booth as she has a personal interest in the case. She is on the board of United Teaching Fellows, and if it's thought that the schools are too dangerous, the programme could suffer. She doesn't want children to have to fight to get decent education. 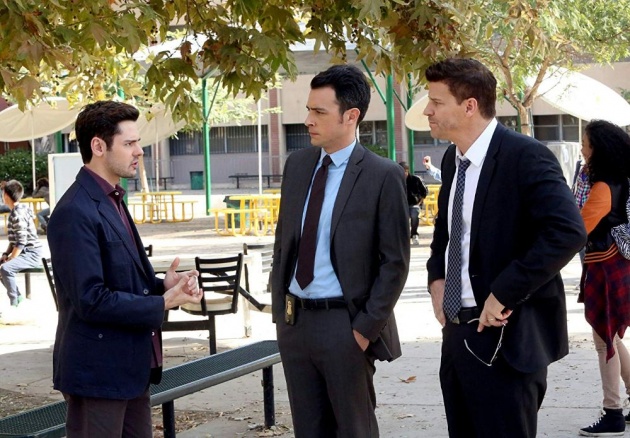 Travelling to the School

On the way to the school where Mia worked, Aubrey mentions that Agent Andy Lister in Brennan's books is based on Booth. And Booth says that it's true. So Aubrey then essentially winds up Booth a bit. Just to pass time. When they arrive at the school, the students are wheeling a small car belonging to one of the teachers across the campus. The teacher, Shane, is also a UTF placement. He says that no-one messed with Mia.

A Death Threat for Mia?

The principal says that, with Shane and Mia, test scores were up across the board. The faculty wasn't threatened, because the UTF placements didn't take away faculty positions, as their funding came from elsewhere. In Mia's desk is a piece of paper with 'M M' on one side and '1987 bitch' on the other. The latter is the police code for homicide.

The 'M M' is for a student called Marcellus, whose 19 year old brother Keith is his legal guardian. Keith is a bit confrontational. Marcellus says that he liked Mia, and she was helping him, but on the Friday of her death he asked for extra help and she said no. The first time that had ever happened. Mia promised to make it up to him on Monday, and Marcellus says that Mia was upset. 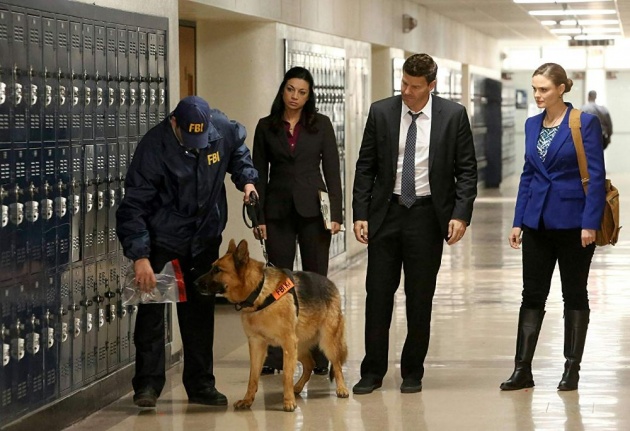 Dead Body in the Locker

Mia had been left standing after she was killed, and was doused in disinfectant. Which Hodgins says suggests that she was in a semi-public place and that it was done to hide the smell. Which it was; she was stuck in a locker. There are quite a few people who look like suspects, not least because they are a little dodgy, but that's too obvious. 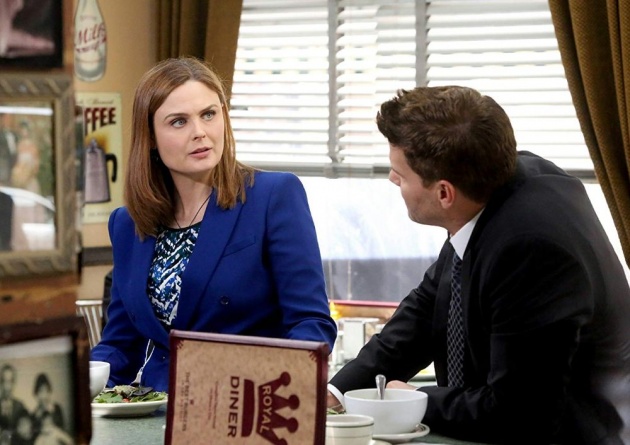 Brennan gets a whole ten Twitter followers, which Booth says is rubbish. He suggests she gets the squint girl - Ms. Warren - to help, as she looks like she understands Twitter. Which she does. Brennan gets a little competitive about building her followers up.

Bones - The Teacher in the Books Trailer