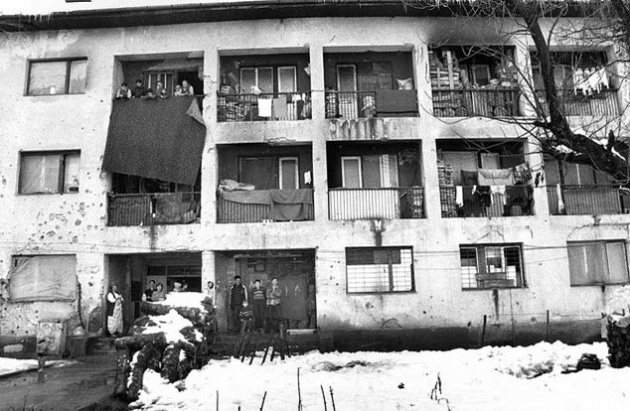 The UN has highlighted at least part of the problem - many still remain displaced/refugees. Perhaps worse though is that even those who have new "permanent homes" did not return to the home from which they were "ethnically cleansed," whether due to fear, lack of support and most critically institutionalized discrimination that not only persists but is further embedded since the Dayton Accords-end of conflict in 1995. As one who negotiated and signed the Dayton Accords, I was not satisfied with its structure as well as effective and unfortunate implicit legitimization of ethnic territorial divide. However, even back then, all of us had reason to hope/expect that more would be pressed and accomplished regarding:

*breaking down the artificial barriers delivered by ethnic cleansing,

*return of refugees/displaced persons, and

*the reintegration of country and society.

Bosnians/Herzegovinian leadership bears some of this responsibility, but also undoubtedly the international powers/authority who effectively pressed the Dayton Accords as the "only option" to end the conflict and genocide. Below is Summary Statement from UNHCR Spokesperson issued on April 3, 2012. It is a comprehensive. We would though highlight 2 elements of the Statement (below in full):

--- The Statement offers that "most of those forced to flee their homes during the 1991-1995 conflict have either returned or locally integrated." However, it is more accurate to point out that most of those ethnically cleansed particularly from what is known post war as "Republika Srpska" have not returned to their ancestral homes even if they may have resettled in other parts of Bosnia & Herzegovina (BiH) or as many have outside the country including the US, Canada and EU.This is major failure of the Dayton Accords and its promoters/guarantors.

--- The Statement points out that UNHCR and other humanitarian workers were substantially more likely to lose their life providing assistance in BiH than UN peacekeepers. The citizens of BiH and particularly besieged cities, towns and villages suffered the most pronounced victimization. Overwhelmingly, Bosnians/Herzegovinians are thankful to those who provided assistance and to journalists whose reporting did not allow BiH to be forgotten.

This is a summary of what was said by UNHCR spokesperson Melissa Fleming – to whom quoted text may be attributed – at the press briefing, on 3 April 2012, at the Palais des Nations in Geneva.

The siege of Sarajevo began 20 years ago this week (6 April 1992). Lasting nearly four years, it became one of the most dramatic and emblematic events of the violent breakup of the former Yugoslavia and the conflict which left an estimated 200,000 people killed and some 2.7 million refugees and internally displaced – the largest displacement in Europe since the Second World War.

The siege brought enormous suffering and misery to some 400,000 inhabitants of the Bosnian capital at the time. Constantly shelled and sniped, people were cut off from food, medicine, water and electricity. Thousands of civilians were killed and wounded. During the war, people in Bosnia and Herzegovina witnessed every conceivable human rights violation or abuse – ranging from ethnic cleansing and rape to mass executions and starvation.

Today, most of those forced to flee their homes during the 1991-1995 conflict have either returned or locally integrated.

However, the remaining refugees and displaced in this part of Europe are one of the five priority protracted refugee situations worldwide for UNHCR. Recently, UNHCR has welcomed renewed efforts of the governments in the region aimed at speeding housing solutions for some 74,000 most vulnerable and needy refugees and displaced. The joint regional programme on durable solutions for refugees and displaced is the latest initiative to close this displacement chapter in South East Europe. It is a commitment by all concerned governments in the region (namely, Serbia, Bosnia and Herzegovina, Croatia, Montenegro) and an initiative supported by the international community.

In order to support this effort, the international donor conference in Sarajevo is scheduled for 24 April 2012. It is hoped to raise up to 500 million Euros needed to find housing solutions for many of the remaining refugees, internally displaced and returnees. UNHCR supports this process and will monitor its implementation in order to ensure that the right people are selected and subsequently receive adequate housing solutions – 17 years after the end of conflict.

For UNHCR, the humanitarian relief operation in Bosnia and Herzegovina and the region has been one of the defining moments in our recent history. It was an operation unprecedented in scale, scope and complexity.

For the first time, UNHCR was operating within a raging conflict, assisting both the war-affected and displaced populations. The humanitarian operation in Sarajevo and in Bosnia and Herzegovina also faced some of the most complex challenges – the sheer scale of the crisis, the displacement of people as an objective rather than a consequence of the war. There were also deliberate and blatant attacks on humanitarian principles, including systematic denial of humanitarian access. Humanitarian staff faced unprecedented level of security risks and the UN forces had the primary mandate of supporting the humanitarian operation.

Between 3 July 1992 and 9 January 1996, UNHCR coordinated what became the lifeline for Sarajevo and the longest-running humanitarian airlift in history, surpassing the 1948-49 Berlin airlift. In total, some 160,000 tonnes of food, medicines and other goods were delivered to Sarajevo in over 12,000 flights. The airlift also evacuated more than 1,100 civilians in need of urgent medical care. More than 20 countries participated in this effort.

Overall, between 1992 and 1995, UNHCR coordinated a massive logistical operation in which some 950,000 tonnes of humanitarian relief supplies were delivered to various destinations in Bosnia and Herzegovina. UNHCR's lead agency role involved a wide range of responsibilities. There were over 3,000 humanitarian personnel from over 250 organizations carrying UNHCR identification cards. There were also more than 2,000 vehicles in Bosnia and Herzegovina with UNHCR registration plates.

In addition to massive death toll among the civilian population, over 50 personnel involved in the UNHCR-led operation lost their lives and hundreds more were injured during the conflict. Based on casualty rates for UNHCR personnel and UN troops from 1991-1993, the probability of being a war casualty was eleven times higher for a UNHCR staff member.

UN Photo - Many of Sarajevo's buildings, like this collective centre housing IDPs, were badly damaged during the war. Photo: UNHCR/L.Taylor

What Would Michael Do?