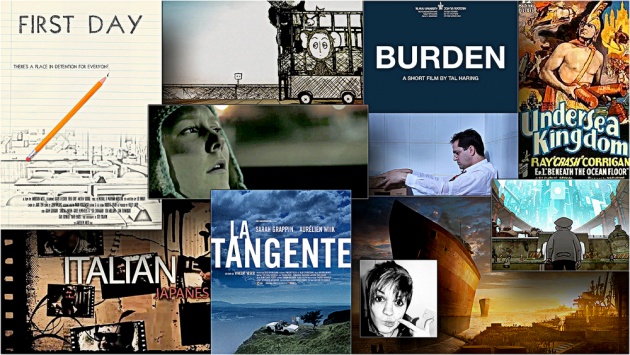 On June 26th, Film Annex is opening the third Internet classroom in collaboration with the Afghan Citadel Company, this time at the Hatifi High School in Herat, Afghanistan. We are very excited and honored to celebrate this event and are thrilled that we are getting closer to our mission of bringing Internet to 40 schools in Afghanistan! Now, back to movies...

Our featured filmmaker this week believes that films have the power to make you escape reality. Wait... Didn't Woody Allen once say that? Well, Amy Hill concurs. While directing, her focus is always on the characters and how they interact with each other. In other words, she's an actor's director. Kyle and Notice are perfect examples. Both movies explore a growing bond between two people who are exactly the opposites of each other and who  live uneventful, dull lives. Watching them connect and eventually help each other is what makes Amy's movies so interesting and touching. She also likes to watch other filmmakers' movies and review them in her blogs in a very blunt way, as she says so herself. Her films are described as 'BritGrit' (British and Gritty)... and she loves the label!

After we traveled to a Lost City last week, we are now following an expedition to Atlantis with Undersea Kingdom. This serial introduces you to star athlete and naval officer Crash Corrigan, Professor Norton, and Diana, a reporter, who all go aboard on a rocket submarine towards Atlantis. They will find themselves in the middle of a civil war between a pacific priest and an ambitious usurper who wants to either rule or destroy the upper world. Mortal combats, escapades, and mysterious machines complete the story. Tune into the Web TV for 12 episodes of pure undersea adventure!

And the 8 top movies of the week are: