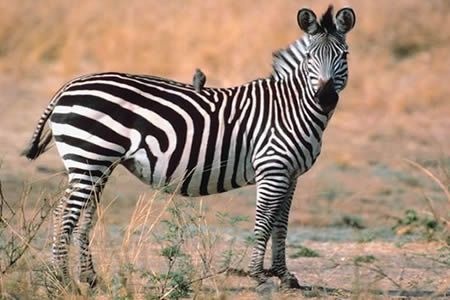 Damara zebras are described as being striped on the head, the neck, and the flanks, and sparsely down the upper segments of the limbs then fading to white. One or two shadow stripes rest between the bold, broad stripes on the haunch. This main, distinguishing characteristic sets the Zuzuland Zebra apart from the other subspecies. Gray (1824), observed a distinct dorsal line, the tail only bristly at the end, and the body distinctly white. The dorsal line is narrow and becomes gradually broader in the hinder part, distinctly margined with white on each side. 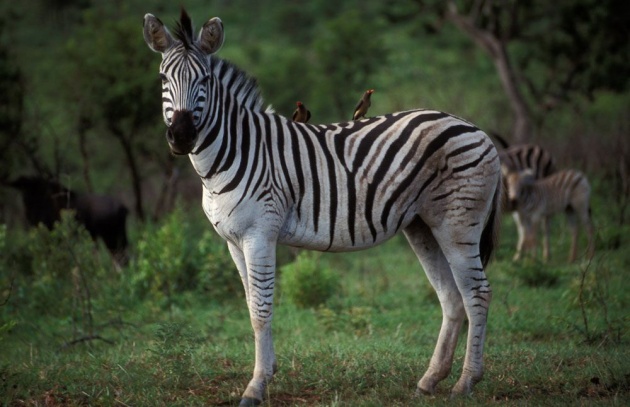 Like most plains zebras, females and males are relatively the same size. Year-round reproduction observed in this subspecies in Etosha National Park, Namibia, concludes synchronization of a time budget between males and females, possibly explaining the lack of sexual dimorphism.

Formerly, the Burchell's zebra range was centered north of the Vaal/Orange river system, extending northwest via southern Botswana to Etosha and the Kaokoveld, and southeast to Swaziland and KwaZulu-Natal. Now extinct in the middle portion, it survives at the northwestern and southeastern ends of the distribution.

Burchell's zebra migrates the longest distance of any terrestrial animal in Africa, traveling 160 miles one way. They migrate from the Chobe River in Namibia to Nxai Pan National Park in Botswana.Their migration follows a straight north–south route almost entirely within the Kavango–Zambezi Transfrontier Conservation Area (KAZA). 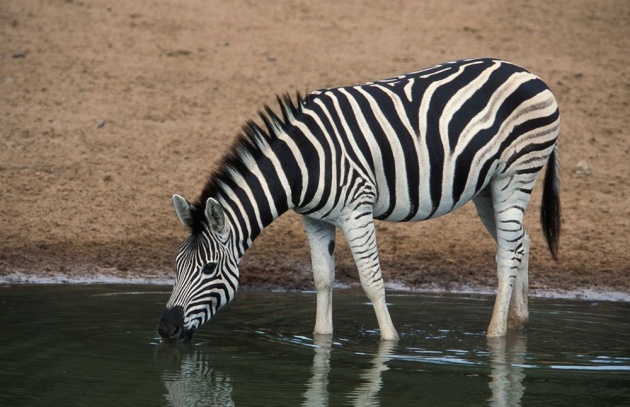 Like other plains zebras, Burchell's zebras must have populated the African plains in impressive numbers. Associations of thousands have been reported. The wild herds were thought to have disappeared by 1910, and the last known captive individual died in the Berlin Zoo in 1918. As European settlement spread northward from the Cape to colonial southern Rhodesia, this subspecies was thought to have been hunted to extinction.

However, Groves and Bell concluded in their 2004 publication that "the extinct true Burchell's zebra" is a phantom. Careful study of the original zebra populations in Zululand and Swaziland, and of skins harvested on game farms in Zululand and Natal, has revealed that a certain small proportion shows similarity to what now is regarded as typical burchellii. The type localities of the subspecies Equus quagga burchellii and Equus quagga antiquorum (Damara zebra) are so close to each other that they suggest that the two are in fact one, and therefore the older of the two names should take precedence over the younger. They therefore say that the correct name for the southernmost subspecies must be burchellii not antiquorum. The subspecies Equus quagga burchellii still exists in KwaZulu-Natal and in Etosha. Equus quagga burchellii can be found in a number of zoos in the United States including the following: the Cincinnati Zoo, Columbus Zoo, Naples Zoo, Nashville Zoo, Oregon Zoo, Woodland Park Zoo, etc., and a small herd of about 75-100 animals is still extant, and free ranging, on the Hearst Ranch in San Simeon, California, USA.