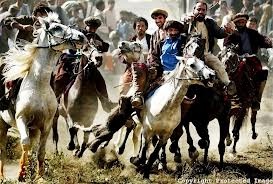 Buzkashi is the name of national and traditional sport in Afghanistan. Buzkashi means to haul a goat, in this play expert and hardy horsemen are competing with each other to win the game. This sport is not only going in Afghanistan, but it is also playing in Central Asia countries like: Tajikistan, Uzbekistan and Turkmenistan.

However there is no history background about Buzkashi, but in some history records mentioned that primary matches of Buzkashi related to Changez king age on 11 century. Some people believe that first matches related to time of Alexander campaign. In fictions came that for the first time this game played near to Oxus when horses used as a fight tool that then these skills of fighting changed to a sport. 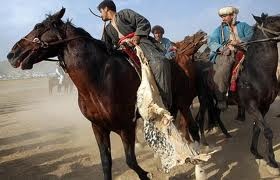 Buzkashi sport supported by different government in Afghanistan, as in Muhammad Zahir Shah period Buzkashi matches celebrated along with birth of imperial.

In this game there is no principle for registration of players, anyone can enter to ground with his horse. There is no limited in width of ground, but Olympic office of Afghanistan has size the ground in 350 to 350 meter square. The ground of Buzkashi sport has two main places, the first place names Helal circle and the second place is flag. The flag placed with a specific distance in front of Helal circle. 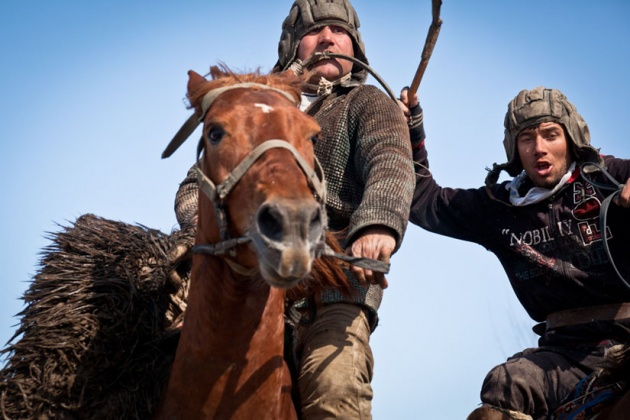 Custom is like this that before playing the game, a calf or a big goat should kill and then the killer cut its head, hands and legs from elbow and knee. Body of animal will be put into cold water for 24 hours to become much heavy.  Sometime for making match heavy the body, they fill the body with some stones. Calf or goat place in mid of the ground and the game starts. The people who are playing in this game name as Chapandaz (horseman).

Method of playing is like this that horsemen combat with each other to get the goat body, they encircle the animal, pick it up and cross from flag then they should threw it into Helal circle.

Values of Buzkashi horses are much more, especially Qataghan Horse which is more famous has high price even you cannot buy with much money. Buzkashi matches celebrate in national days, national parties, Nawruz and other important days. Because of temperate weather this sport is doing in Spring and Fall seasons.