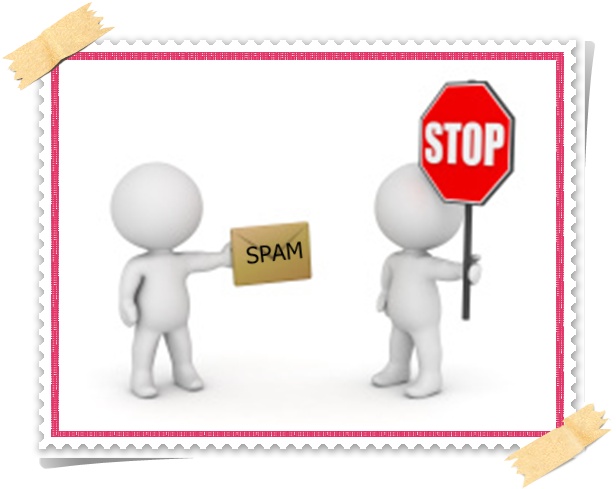 Image courtesy of http://www.istockphoto.com and edited by shaiera

I am about to post my title words on my micro blog section, but then, I just realized that this should have my reasons and since it will be long, I decided to write this up as a blog instead. I just want to pour my sentiments on this blog, if you don't have anything good to say. Don't you dare to spam!

Actually, I am already used to receive spam messages. In fact, majority of messages in my inbox contained spammed messages. I don't care and I don't want to entertain, but the problem with these unfair users become so alarming that even I am using other sites to earn, they still do message me. 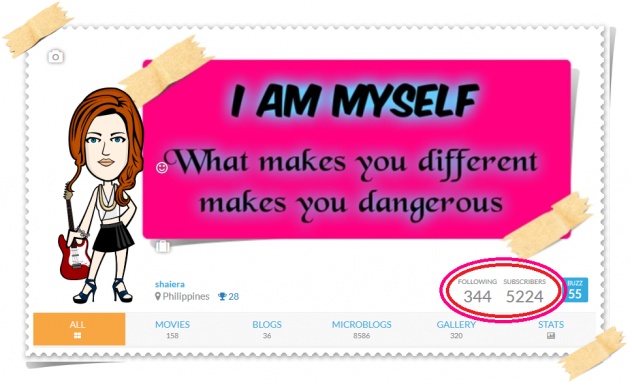 I am not wondering that I have this number of following and subscribers as stated in the image above. Yes, I do not follow those who subscribed me because some just doing spamming. I know that among those subscribers, there are still some good users and I am trying to figure it out to be followed as well.

Let's first tackle about WHAT IS SPAMMING and the Different kinds of spamming that are existing on this site. Come and let's start! 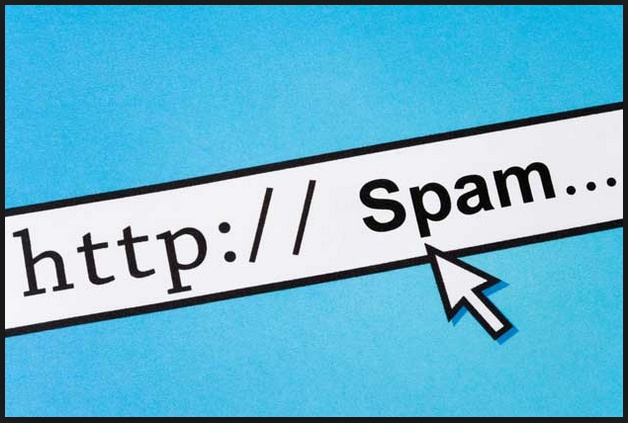 Spam is know to be the flooding messages to the internet with many copies of the same message, sometimes it can be a non sense message or a message that is send just to annoy you because it only consists of scrambled letters just to get your attention. To know more about spamming, watch the video below:

There are spammers everywhere in our cyber world and it is quite alarming. Because we are living with this generation of computer age where almost everyone is expose to social media, it is not surprising that these numbers of spammers are growing too. To give you an insights on what are the kinds of spammers that are existing in this particular site, I prepared again a set of pseudo names to describe these unfair users. I hope that this time, you are NOT one of them.

KINDS OF SPAMMERS IN BITLANDERS 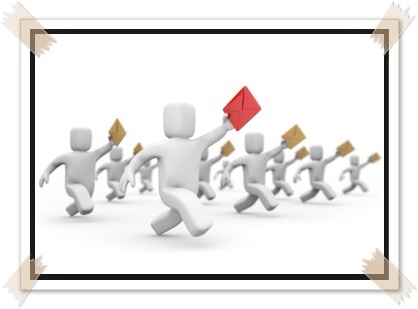 I've been a school writer or known as a school journalist since elementary, and they know me for using pseudo names whenever I want to describe some groups of people. So, I will going to use some pseudo names to describe the group of spammers here just to have something to laugh about and ease this bitterness in mine... Gosh! I really hate those spammers. -.- 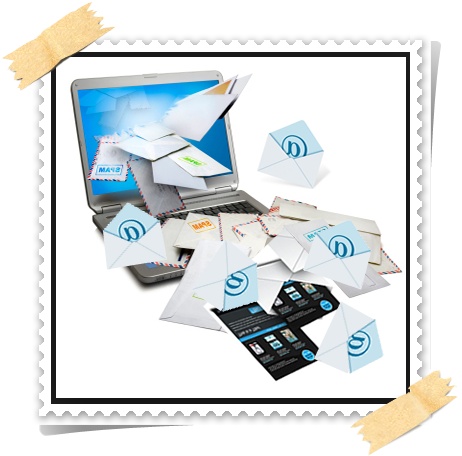 Based from the name itself, ekk ekk for me is the kind of spammer who is doing spamming by posting repeated contents. The users that are belong to this are merely under the spell of the so-called "sub for sub and buzz for buzz deals."  Which means that they will subscribe you and you MUST  subscribe them back, when they buzz your contents and you MUST do the same.When you don't, they will call you as a CHEATER ( Well, I can't remember the number of times where some EKK EKK called me a cheater. Haha! They called me a cheater where in the first place they are the one who's cheating. They are doing what is against to the rules. Check this out -->  Rules to Follow on bitLanders To Avoid Suspension or Ban.) 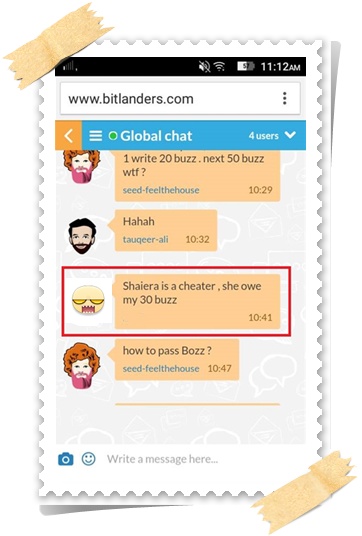 These EKK EKK can often be found in the GLOBAL CHAT. They are there to do their businesses. They will send you a message in private or sometimes they will do it on the global chat. What is more annoying to their activities is that, when they send you a deal in private chat, they will automatically think that is already accepted, after sometime when you didn't follow them and buzz their posts, they will call you a cheater. ( -.-  haizztttt, I really hate them, see the image to the left side? She called me a CHEATER in the Global Chat... poor me -.-).

Aside from poisoning the harmonious conversations in the global chat, some will send a message in the INBOX. Actually, majority of the messages that are in my inbox are deals. It's tiring to delete those so I just ignore their messages.

Another annoying act that they always do is that they will buzz your posts and leave a message in each post. In my case, I always want to interact with other users so I am happy seeing some comments in my notifications but when I visit each , oh come on! You will just see the same messages or stickers in each posts. It sucks you know? this kills the enthusiasm of being active.

The number one ekk ekk that I will never forget on this site is the one that always leave a message on each of my posts stating, ONE HINT IS ENOUGH FOR A WISE PERSON. Old users are surely know that guy. He keeps on posting that and I don't know why he need to use that phrase while his hint on my posts are almost a hundred times. -.- ( Maybe for him I am not wise :P and so to all users that received his comments).

Over all, BUZZ for BUZZ and SUBS for SUBS kind of deals are the most common spamming act in this site. I am glad that some bitsers are correcting them and giving good advice to stop them from being spamming BUT, some are really hard headed users, instead of listening, they insult those who are giving them a warning. 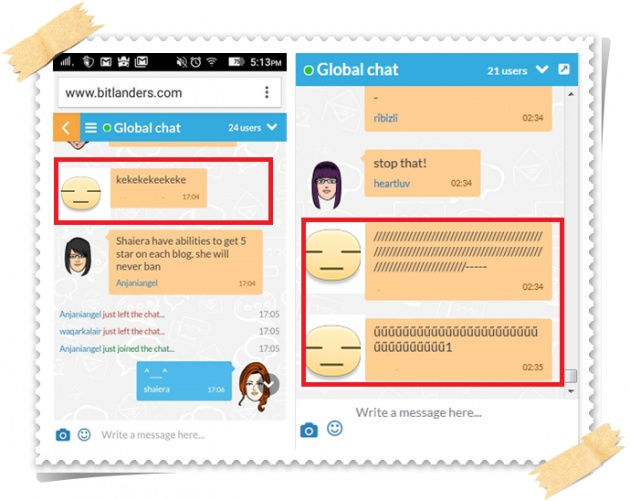 I know that aliens are yet to be discovered in our world. But on this site, they are already existing (hehe! :P ) . Another way of spamming is that, sending nonsense messages or merely scrambled letters. For the pseudo name that I used, I called them aliens because no one can understand they way of typing. they use characters and posting it on global chat or on the contents of other users. They do that to get the attention of the other members. Well, they got my attention, unfortunately, I hate them. -.- And I know, majority of the users in this site will hate them too. 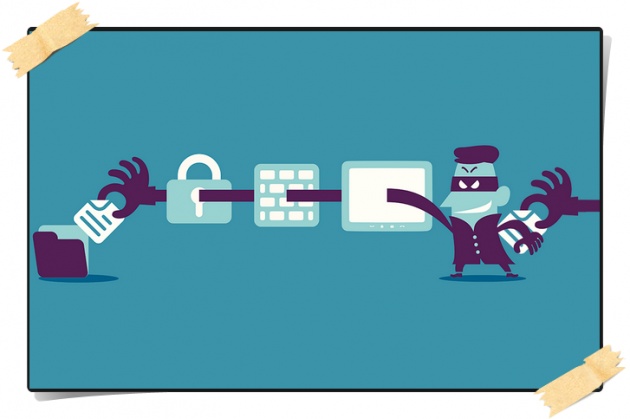 Opssss!!! I love magicians, those who can amaze me and make my mind blow. I like the way that magician make me think harder BUT the magicians that I am trying to point out is different from the magicians that we used to know in real life. The magician that I am trying to say in this blog is the one who do hacking. Yes! there are some who can do that, actually my close friend here already experienced the magic of a spammer-magician. It is quite alarming but all you need to do to avoid them are to be careful and don't click the link that they will send you. The trick is commonly on their link. :) 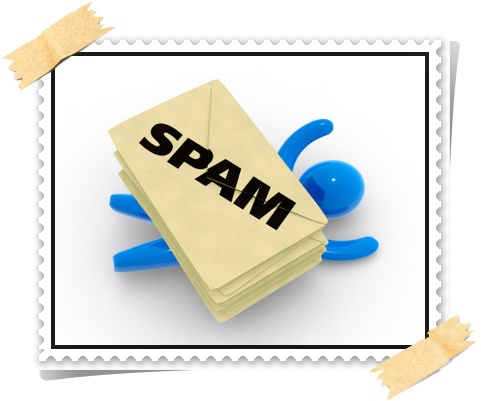 Every day, there is always a new user. As I said before, the number of population on this site is fast growing and yes, the number of spammers are adding too. It is a burden for the good users that instead of making their free time to interact to know more with the people across the world, their time became wasted every time they accidentally viewed spammed messages. By the way, you can avoid receiving spammed messages in the global chat by blocking them ( applicable in the global chat and private chat only). The easiest and the best way to eliminate them is to report them to the bitLanders email address which is cs@bitlanders.com. Help this site to eliminate those unfair users, bitsers (bitlanders users). Don't hesitate to report them because they  will just destroy this site.

Just like the video above, all you need to do on this site are to share quality content posts and be socially active in the way that you are following the rules and not doing spamming. Follow sir micky-the-slanted-salerno and read his blog posts to know more about the rules in this site. By any chance that you are a new user or one of the spammers that I have mentioned above, it is your time to change. Spamming is not the way to earn from this site. Doing spam activities can be a reason to get ban on this site. I understand that you want to earn, but why not earning with a good conscience instead? Be responsible enough to earn with a good activities. There are a lot of ways that you can do to earn bitmiles like participating in the survey chats, writing blogs, posting quality contents and etc. Read my blog to know the other ways to earn bitmiles --> BitLanders Survey Chats, the new way to earn bitMiles . Remember that, You don't need to ask for buzzes, when the users find your content interesting and worth a buzz, they will buzz that and follow you.

To know more about how to eliminate spammers, read my blog GET RID OF THE SPAMMERS THAT MAKE BITLANDERS.COM SUCKS! Just hit the link and it will lead you the right page.

Note: The content of this blog is my original work, PLEASE DO NOT PLAGIARIZE.
Thank you for reading!

Secure Yourself from Hackers

This is to remind everyone that we must avoid phishing emails, fake 'virus' alerts, phony support ca…

What are the safety measures you should take while driving?

In this modern world, everybody has a vehicle of their own and always have to drive to their destina…