Taking care of animals, such as chickens may seem an easy task to do but it is actually not. As a wife of a gamefowl breeding enthusiast, it is always a challenge to keep chickens healthy throughout their lives, from the time that they hatch to that moment when they step into the ring to fight.

In some countries, rooster fighting maybe illegal, I hope bitLanders would allow this topic to be discussed over here though because, in other areas such as in the Philippines, it is actually supported by the government. In fact, we have a law for that.

So, rooster fighting is actually considered a sport in the Philippines. You'll easily figure out if there's a gamefowl arena nearby as there will be lots and lots of vehicles around that area. Sundays are the usual regular fight days, we locally refer each game as "Sabong or Buwang" in our dialect. But there are also days when huge derbies and tournaments which is considered highly important games for those who take this sport seriously.

Growing animals just like humans require proper care and nutrition. And just like human athletes, rooster athletes do need protein too! But the growing market of feeds also has increased its market prices that breeders and farm managers have to find alternatives in order to lower down their costs but at the same time maintain the proper nutrition of their animals.

In this matter, Azolla came into the picture. If my husband was not engaged in this type of sport, I won't recognize this powerful fern plant which gives value to local farmers and also to the big time farm managers. Azolla has made a difference and I will tell you more about it in the following Querlo Chat: The Powerful Azolla. 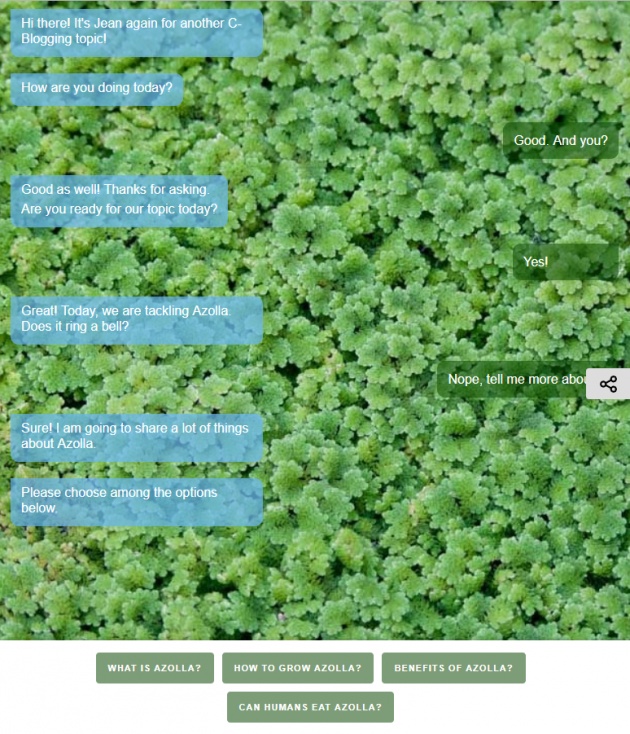 With the use of Azolla, it is certain that small time farmers or breeders of livestock and other animals have an alternative in lowering down their cost for feeds. It is evident that it is easy to grow and it requires very less maintenance that it would only require a little time for you to add the manure into the pond and the return is multiplied in several times.

Considering using Azolla in your pet feeds, you can add it together with it or simply throw a few scoops into your animal feeding plates. Let's see if they'll like it!

Thank you for reading and participating in this Powerful Azolla Querlo Chat!